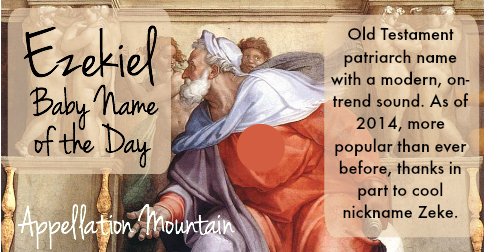 This Old Testament appellation has never been more popular.

Thanks to Kelly for suggesting Ezekiel as our Baby Name of the Day.

Noah, Isaac, Jacob. The average kindergarten has at least one Old Testament patriarch on the roster.

This name fits right in.

It means “God will strengthen.”

The Book of Ezekiel chronicles events during the Babylonian captivity. Ezekiel was among the Jews of the Kingdom of Judah forced into exile during the sixth century BC. He was a priest and later became a prophet, his visions describing the eventual restoration of Israel.

While he’s not a baker, his story does include a recipe for bread: wheat, barley, beans, lentils, millet,  spelt. The simple, wholesome bread that provided his sustenance during two years in the desert has inspired recipes, Ezekiel bread kits, and even Ezekiel 4:9 organic sprouted bread. (And cereal, and even cinnamon raisin English muffins.)

Ezekiel: In the New World

The prophet wasn’t the only bearer of the name in the ancient world, but he was the most famous. His name was adopted in the English-speaking world post-Reformation.

Arthur Miller’s The Crucible was a semi-fictional account of the Salem witch trials. Miller named a character Ezekiel Cheever. He was among those who made accusations of witchcraft.

There was a real life Ezekiel Cheever, but he had nothing to do with Salem. He was a widely respected and influential seventeenth century schoolmaster, the author of a well-regarded textbook on Latin and was a long-time headmaster at the prestigious Boston Latin.

Into the late nineteenth century, Ezekiel was steadily used, though not common. Many of the best known Ezekiels are famous in fiction, and many of them answer to Zeke.

Disney used the name twice, for a Wizards of Waverly Place character, and again, for one of the title characters in Zeke and Luther.

Many a Zeke was not an Ezekiel at all:

Ezekiel: On the Rise

When this post was first written, I called Ezekiel “just a little different” and a good choice for parents disappointed that Isaac and Levi had both entered the US Top 100 – even though Ezekiel seemed “headed straight into the Top 200.”

And yet, some of what I wrote back in 2010 still holds. Ezekiel is less common than Alexander or Gabriel. It’s a great combination of ancient roots and modern sound.

If you’re after a Biblical boy name that’s very wearable today, Ezekiel is one to consider.

Do you prefer Ezekiel or just Zeke?