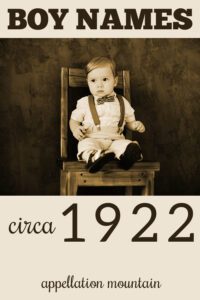 1922 boy names could be coming back into style right about now.

The 100 year rule predicts that it takes about a century for names to fall in use, become unfashionable, fall off our radar entirely, and then fell fresh and new once more.

And yet, it’s never quite that neat. Some of the 1922 boy names count as classics. They’ve never left the US Top 100 and show no signs of doing so any time soon.

With the exception of the evergreen classics, names don’t hold still. Some of 1922 boy names ranked in the Top 100 then … but stayed there until the 1940s or 60s. That means they can feel more tied to a later generation, and still need a few more decades’ rest to feel novel once more.

And, of course, some names simply do fade from use.

First, let’s take a look at the actual popularity data for 1922 boy names.

Then there are those names that lingered on the edges way back in 1922 – and would feel fresh and interesting today.

A Scottish heritage choice that sounds growl-y and strong, but also accessible and sweet at the same time.

The middle X makes this surname name feel like an obvious choice. Not nearly as modern as Jaxon, but also not nearly as traditional as Maxwell.

So many parents grew up on Ferris Bueller’s Day Off, but somehow, the name remains rare – even as his BFFs, Cameron and Sloane, have seen their names soar.

Quirky, fun Fritz started out as short for Friedrich. But it seems like it could stand on its own nicely now.

A gentlemanly, gently British name, Giles could pick up on our love for Miles.

It sounds like it should be a twenty-first century name. But it was well-established in the early part of the twentieth century, and quite rare today.

Casual, cool Ike is less expected than Gus, but every bit as storied.

Fresher than Lawrence, but with deep roots.

Longer Leo names offer the best of both worlds, and dashing Leopold is among the best of the antique options.

Friendly Murphy is an Irish surname name on the fringes in 1922 and 2022. But it feels like a name American parents could embrace today.

Traditional Edward has fallen in use dramatically in 2022. But nickname name Ned might stand on its own, a brother for Grant.

Regal and strong, Rex would fit right in with epic boy names like Ace and Reign.

Cool, colorful Rufus might be among the most overlooked of traditionalish names ever.

It sounds a little Game of Thrones, but Theron means hunter in Greek.

Surname name Walton fared better in 1922 than it does today, but wouldn’t Walton fit right in with Carson and Hudson?

What do you think of the 1922 boy names? Are there any you would use – either from the Top 100, or the rarer choices? 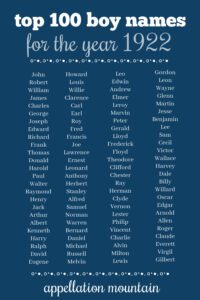 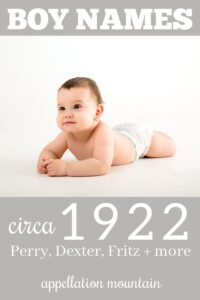