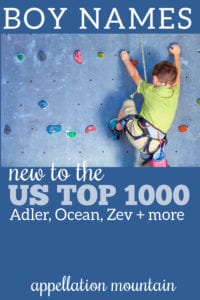 Why does it matter?

But just as often, this list introduces names to parents who are looking. Countless website and articles base their content around the US Top 1000. It’s an easily accessible data set, one that parents can stumble on in their research.

And it’s a good measure, too. It helps parents gauge extremes. If you want to avoid the most popular names, well, Noah and Liam are probably off your list. But if a name makes it into the Top 1000? Maybe it’s familiar enough to consider for your own son.

So 38 seems a little on the low side, but within the normal range. (It looks like 42 is the average.)

A Biblical name with a throwback vibe, Abner benefits from an appealing meaning: my father is light.

A German surname, Adler fits with Hunter and Parker and so many -r ending names for our children. A bonus? It means eagle in German.

We love Xander and Anderson, so the sky-high debut of Ander is only a little surprising. Credit likely goes to Spanish footballer Ander Herrera.

Brief and sharp, Avi comes from Hebrew and means “my father.” But it also feels like a masculine answer to popular feminine choices like Ava and Ivy

An occupational surname with a spiritual side.

Plenty of handsome possibilities begin with Cal. So in our age of Max and Wes, no surprise that just Cal makes the list, too.

Often the K spelling of a name follows the C version. In this case, though, Killian has been popular in the US in recent years. The more authentically Irish spelling Cillian now joins the K version on the charts. Peaky Blinders star Cillian Murphy might get credit for the name’s rise.

The baby name Cohen is wildly controversial. It’s a surname denoting priesthood in Judaism; the name’s status as a trendy surname name can be viewed as offensive. Coen, though? It’s Dutch, a cousin to Conrad. And odds are it’s trending because popular books-turned-Netflix series The Witcher includes a Coen.

A Slavic name, Damir means “giver of peace.” While it’s obscure in English, a handful of athletes – mostly from Croatia, Slovenia, and Bosnia – have raised the name’s profile.

A creative spin on David, inspired by Julian and Adrian.

Short for Dionysios, the Greek god of wine and merriment, Dion peaked back in the middle of the twentieth century. That’s when singer Dion was known for hits like “The Wanderer.”

A high fashion surname name, Dior might be another Dionysios cousin, but it’s usually linked to the French d’or – of gold. The glittering meaning just right for a luxury brand.

A name that brings to mind yo-yos and doughnuts, Duncan started out as the name of two Scottish kings – one of whom was immortalized in MacBeth.

An Old Testament name, Eliezer follows Elijah, Eli, and so many similar names into wider use.

With surname name Everett firmly in the US Top 100, Everest feels like a logical successor. The name of the world’s highest mountain, Everest signals achievement.

Once a nickname for Francis, this casual cool choice is rising in the UK. Frankie fits right in with Archie.

An Arabic name meaning wise, Hakeem has occasionally appeared in the Top 1000 before. Credit has gone to basketball star Olajuwon and Empire character Hakeem Lyon in the past; this time, it’s not clear what pushed the name back onto the charts.

It looks like a dressed-up version of Jacob or Jacoby. But it might also have Japanese roots. Or it could be a shout-out to the late Kobe Bryant.

This list marks a sky-high return for Jaxtyn, a name that briefly charted in 2018, too. It’s an invention in the key of Jaxon and Axton.

A surname name with a certain amount of swagger, Jones is familiar as a last, but very rarely heard as a first. But with approachable nickname Joe, it’s among the most wearable of choices.

French surname name Corbin means raven. It’s had a good run in recent years. The re-spelled Korbyn debuted on the list for the first time this year.

An accessible Japanese name, Kenji has become more familiar over the years, thanks to a long list of athletes and other notables with the name.

A Scandi name famous for Viking Leif Eriksson and 70s teen idol Leif Garrett, this short name could fit right in with everything from Cole to Lane.

A Top 1000 favorite for girls, Lyric has also made the boys’ charts in recent years. It left briefly in 2019, but is back now.

It brings to mind legendary musician Bob Marley – and his talented children, too. While it’s far more popular for girls, Marley appears in the boys’ Top 1000 most years, too.

Fun fact: McCoy shares the same family tree with recent mega-hit Aiden. But it’s familiar to American parents thanks to the phrase “the real McCoy.” It means authentic – an appealing choice for a child’s name.

A friendly Irish surname name, Murphy’s meaning is great: sea warrior. The name debuted for boys and girls this year.

Another name inspired by water, just like current favorites River and Kai.

The Egyptian god of the afterlife, Osiris’ name fits in with ancient favorites like Atticus.

Another s-ending boys’ surname name buyoed by Brooks and company.

The Spanish word for river, and an on-trend mini name in the key of Leo.

A consistent Top 1000 name most years since the 1930s, Rogelio left briefly. But the romantic Spanish name returned in 2020.

The spelling Shepherd is far more popular, but this version has seen some use, too – especially as the -herd spelling catches on.

Truett combines the stylish -ett ending of Emmett and Beckett with a built-in nickname and virtue name: True.

A Hebrew name meaning wolf, and a short, punchy name with plenty of appeal.

Zaire and Zyaire are climbing fast, so no surprise that Zyair, too, has entered the charts.

Which are your favorites of the new boy names 2021? 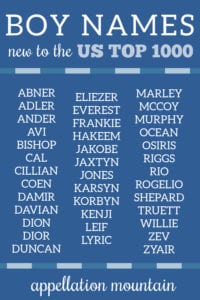