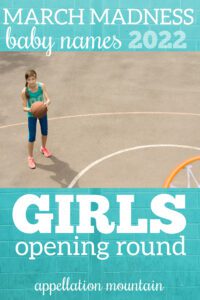 The most popular names searched at Appellation Mountain have always been a quirky bunch. After all, this site is no democratic database, with every name equally weighted. Instead, the most popular names often wait neglected, while quirky and obscure favorites feature on the home page.

The result? A sweet sixteen of most-viewed names from the site that look nothing like the most popular names anywhere else online.

I set them up in brackets, and you vote until we have just one final name to crown champion, for boys and girls.

Pop culture curiosities always make the most popular posts list, though rarely do they advance much beyond the opening round. Other names appear in the US Top 100 – but struggle to make it through the competition.

So which names win? Here’s the complete list of past champions:

Appellation Mountain readers also tend to be ahead of the trends. We embraced Sylvie and Louisa and Archer when they were still beginning their climb up the charts. In fact, most winning names gain in use over the next several years – at least.

Let’s look at this year’s contenders.

A * indicates that a name also took part in the 2021 March Madness competition.

A color name with a cool current sound, could Navy be the next Ava … or Scarlett?

It echoes Top Ten favorite Noah, but Noa is a separate, feminine name.

A mythological successor to Penelope.

Sparky and vintage, Maisie is a Margaret nickname that stands on its own.

Short and sweet, with a dose of fairytale magic.

An unexpected twist on Stella and Bella.

An edgy Susan nickname, made familiar – and seasonal – to fans of the enduring Christmas classic It’s a Wonderful Life.

A pretty nature name, but with a medicinal aftertaste that has kept it out of the mainstream, at least for now.

Vintage Bernadette could be just on the right side of granny chic.

A flower name with great short forms and a sparky sound.

Elegant and elaborate, and just a little less expected than grand Alexandra.

A brief name, rich with two of the strongest meanings: truth and faith.

Thank you for voting! Polls will stay open until March 10th. Check back on March 11th to see which of your favorites advanced – and, of course, to vote in the next round! 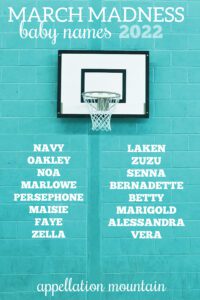 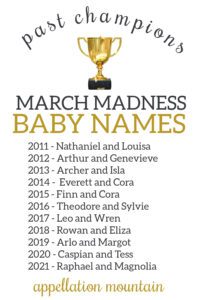