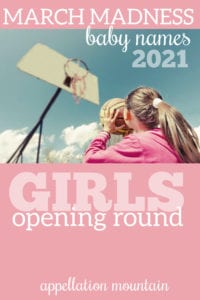 It’s the first Saturday in March, and that means …

The most popular names searched at Appellation Mountain have always been a quirky bunch. After all, this site is no democratic database, with every name equally weighted. Instead, the most popular names often wait neglected, while quirky and obscure favorites feature on the home page.

The result? A sweet sixteen of most-viewed names from the site that look nothing like the most popular names anywhere else online.

We set them up in brackets, and vote our way until we have just one final name to crown champion, for boys and girls.

Pop culture curiosities always make the most popular posts list, though rarely do they advance much beyond the opening round. Other names appear in the US Top 100 – but also can’t go all the way to the final.

That said, the names that triumph tend to be more familiar.

It looks like a creative spin on masculine Noah, but Noa is a separate name, popular throughout the Western world.

A mythological name new to the Top 1000, following Penelope up the charts.

A color name that borrows sounds from both Ava and Ivy.

Yet another flower name possibility, this one made famous by Downton Abbey.

A stylish surname name poised to follow Harlow and Monroe.

A gorgeous, dramatic flower name with a Southern vibe.

The Netflix movie about Sherlock’s little sister brought the Holmes family to a new generation, and introduced the name Enola to a wider audience, too.

Another Margaret nickname, this one by way of Scotland, Maisie is following names like Millie and Daisy up the popularity charts.

An invented surname-style name with plenty of promise – and a great many potential spellings.

An all-but forgotten name from ancient Greece, until Australian break-out hit Miss Fisher’s Murder Mysteries made us all so very curious about the name.

An unexpected Susan nickname, forever tied to the holiday season thanks to It’s a Wonderful Life.

A vintage revival with two compelling meanings: faith and truth.

A spare and simple name that feels romantic and enchanting, too.

Once an alternative to fast-rising Amelia, Emilia is nearly as popular now.

A cheerful nickname for Christina or Katherine, or maybe even a bold given name.

The most popular name at Appellation Mountain is the #1 seed, facing off against the #16 name.

Check back next Saturday, March 13th to see if your favorites advance. And, of course, to vote in the next round of March Madness Baby Names 2021.