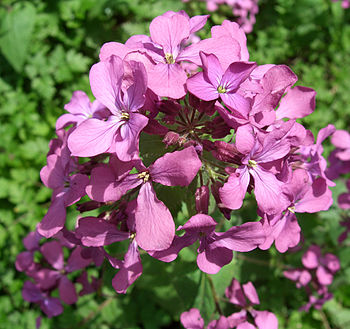 Looking for a virtue-name that out-virtues Grace, Faith, and Honor?

Thanks to Vicki for suggesting Honesty as our Baby Name of the Day.

Here’s the thing about Honesty: besides being an over-the-top virtue name, it is also a flower.

And a rather pretty one, too, at least some of the time.  Perennial honesty is an herb found in Europe.  Annual honesty is pictured above, a flowering plant found in Asia and the Balkans.

If any floral name is a possibility, then Honesty has potential.

But wait, there are more reasons to consider Honesty a given name:

The real stamp of authenticity might be this: Saint Honestus was a third century evangelist, martyred in a Christian persecution in Spain.  He was also called Honest and Honesto.  So Honesty isn’t too far off from a name with some history of use.

Saints and flowers aside, Honesty is a very powerful word.

It comes from the Latin honestatum.  Today it means to be truthful and fair.  Originally, honesty was about character, integrity, and honor.  At one time, it implied elegance, too.  Now the word is more humble, but still has all of the force of the virtue.

There’s something about Honesty that is gentle.  In the 1970s, Avon had a perfume called Sweet Honesty.  And Elton John recorded a song called “Sweet Honesty” in the 1960s – though it is not one of his better-known songs.  And in 1974, Olivia Newton-John scored a huge, career-making hit with “I Honestly Love You.”  So that’s pop culture’s influence, which isn’t nothing – but doesn’t necessarily make it feel more like a given name.

I’m tempted to call it a Puritan name – except that I can’t find a single early colonist actually named Honesty.  John Bunyan’s Pilgrim’s Progress, an enduring 1678 religious work, used names like Christian, Faithful, Prudence, and yes, Honest.  But most of the names Bunyan used were clearly descriptive, not names to be borrowed for actual children.  Alongside his virtuous picks were choices like Watchful, Timorous, and Despondency.

Maybe there weren’t any early colonists answering to the name, but it has caught on with twenty-first century American families.  In 2012, 225 girls were named Honesty, plus another 39 girls named Honesti and eight called Honestee.

There was also a birth announcement for Clementine Clara Honesty in October 2013’s Nameberry Babyberry report.

While Honesty had never cracked the US Top 1000 as of 2012, she’s poised to enter the rankings.  With choices like Genesis and Destiny in the Top 100, it isn’t a stretch to imagine parents considering Honesty.  She’s less old-school than choices like Temperance, but she’s not quite as novel as Serenity.

Overall, Honesty is quite the name.  She’s stunning in the middle spot, and she’s one to cautiously consider as a given name, too.  If girls can be named Hope, maybe Honesty is just as wearable.