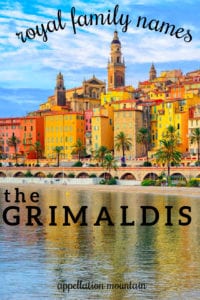 Don’t you just love a royal family tree, especially one with elaborate, language-spanning names? The Grimaldi royal family names might be the most intriguing in Europe.

The family originally hails from Genoa, but they’re most closely associated with the tiny, prosperous principality of Monaco.

Their roots trace to the twelfth century. The family intermarried with royals from all across the continent – and Hollywood, too.

This list is far from exhaustive, and there’s no particular criteria used to determine which make the list and which were left behind. Scanning the family tree over the years, these seem most interesting. Some feel very wearable today. Others might be more of a stretch.

ANASTASIA – There’s an air of tragedy surrounding Anastasia. But the name has been reclaimed in recent decades, and the meaning – resurrection – is stunning.

ANNA HIPPOLYTE – Hippolyte was an Amazon queen in Greek myth. It looks like “hippo light,” but the correct pronunciation is closer to heh PAHL eh tee.

ANTOINETTE LOUISE ALBERTE SUZANNE – It’s hard to imagine Alberte catching on in the US, but it feels all sorts of gorgeously French.

CHARLOTTE MARIE POMELINE – The first of the Grimaldi royal family names to attract attention on the site was Pomeline; it’s a gem of a rare family name.

CHRISTINE ALIX – We tend to view Alix as a modern borrowed-from-the-boys name, but it comes with history aplenty as a girls’ name.

CLAUDINE – All of the Claud- names are out of favor, but this one could be perfection in the middle spot.

ELISABETTA CHARLOTTE – While most of the Grimaldi royal family names favor French forms, here’s a good example of Italian influence.

FLORESTINE – A nineteenth century rarity probably inspired by Florestan, another one of those fantastic Grimaldi royal family names.

GABRIELLA – Twin sister to Prince Jacques, the current heir to the Monegasque throne, her full name is Gabriella Thérèse Marie.

GHISLAINE MARIE FRANCOISE – Françoise doesn’t seem terribly accessible in English, though several of the Francis names are enjoying a rise in popularity.

HONORADE – A rare French name found among the branch of the family in Antibes, Honorade is likely related to Honorata, meaning distinguished.

IPPOLITA – Hippolyte made it onto the family tree via the even more obscure Italian Ippolita.

LOUISE FELICITE VICTOIRE – Felicity is an American girl, but Félicité sounds like a mademoiselle.

MARIA DEVOTA – You might know that Sophia likely started out as a word misunderstood as a given name. Devota is the same; the martyr Julia was described as “Deo Devota” – devoted to God. She’s since become known as Saint Devota, patron saint of Monaco.

POMELLINA – The original form of Pomeline, as imported from Genoa by marriage.

TEDISE – This names takes us back to the 1300s. The bride of a younger brother, Tedise is barely a blip in historical records. Is this name a misprint, a fleeting rarity, a once-common name now forgotten? Whichever answer is correct, Tedise makes for an intriguing rarity.

ANDREA ALBERT PIERRE – Princess Caroline’s son, and a handy reminder that elsewhere in the world, Andrea is a boys’ name.

AUGUSTINE – This serious, saintly name gets a boost in the 21st century thanks to potential nickname Gus.

CATALAN – A masculine form of Catherine? A reference to Spain? Or something else? The fifteenth century name seems surprisingly wearable.

GASPARD, GASPARE – The -d ending is French; the -e, Italian. Either way this makes for an exotic spin on Jasper found among the Grimaldi royal family names over the ages.

JACQUES HONORE RAINIER – The only son of reigning Prince Albert II and the next in line for the throne.

HERCULE, ERCOLE – It might be tough to live up to the name of legendary hero Hercules. And it is tough to hear the French Hercule and not add “Poirot” automatically. The Italian Ercole is more obscure. They could be great in the middle spot.

HONORE – Like Hippolyte, Honoré has been worn by more than one royal, even if it is rare outside of Monaco.

LANCELOT – At least one member of the family answered to this bold, dramatic name in the fourteenth century.

LANFRANCO – A name all but lost to history, it also appears over the centuries as Lanfranc.

LUCIEN – One of the more wearable masculine monikers on this list, Lucien fit in with all of the Luke names we love right now.

RAINIER – A common name for Monegasque men, and once fairly common throughout Medieval Europe.

RAINIER LOUIS HENRI MAXENCE BERTRAND – How’s this for an imposing formal name combination? The late Rainier III, husband of Princess Grace, answered to this regal moniker. An obscure saint’s name, Maxence might serve as a possible alternative to Maxwell.

TANCREDE FLORESTAN ROGER LOUIS – Tancrede is a Germanic name found in Spain as Tancredo, Italy as Tancredi, England as Tancred, and France as Tancrède.

*Every name on this list belongs to a member of the extended Grimaldi family. However, not all of them used the title prince or princess.

What do you think of the names? Are you attracted to royal family trees, or do the Monegasque names strike you as too extravagant?