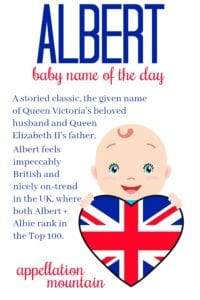 Albert is my pick for the new British prince’s name. It’s been worn by a world-famous royal, a popular song, and a genius before, so any child with this name would be in good company.

Could our Baby Name of the Day be about to make headlines?

One hundred years ago, this name was a standard go-to for boys born in the US. It ranked in the Top 20 into the 1920s, and remained in the Top 100 right through 1961. That means your average bearer of the name is likely to be all grown-up right about now.

In fact, Uncle Albert sounds exactly right. It’s the fun-loving uncle in Mary Poppins, who hosted a mid-air tea party fueled by laughter. And Paul McCartney scored a #1 hit with a song by the name in 1971 – and yes, Paul had a real-life uncle by the name.

The means appeals, too. It comes from the Germanic Adalbert – noble and bright. When it came to England, it met up with the similar Aethelbert, which has Anglo-Saxon roots.

Three saints answered to the name before the year 1000. Then came a string of Austrian Dukes and two German kings. Add in a Swedish monarch, a handful of distinguished bishops, margraves, princes, and such, plus historian Albert of Aachen, who chronicled the First Crusade, and it’s a name rich with achievement.

European royalty used the name for generations, but it’s rare in English circles until the future Queen Victoria married Prince Albert of Saxe-Coburg and Gotha.

It’s a fascinating tale – an 18 year old queen, cousins who ended up a love match, an unpopular foreign prince who won the respect of his adopted country, a long mourning following his death.

It appears as a given name or in the middle spot for plenty of their descendants, including Prince Harry.

Queen Elizabeth II’s father reigned as King George VI. But he was born Albert Frederick Arthur George, and known to his family as Bertie.

All of this makes it feel very British, indeed.

Besides the many descendants of Queen Victoria, there’s:

It’s a frequent place name, and has some fun uses, too. It’s the name of one of the University of Florida’s alligator mascots, a short-lived British automobile company, and a brand of tobacco that inspired the joke about letting Prince Albert out of the can.

And children of the 1970s remember the animated Fat Albert and the adopted son of the Ingalls family on Little House on the Prairie. The character didn’t appear in the original books; he was invented for the series.

Albert: By the Numbers

The British do like a good nickname name, with Charlie, Alfie, Freddie, and Archie all near the top of their charts.

Possible nickname Albie is rising through the English Top 100, as is Albert in full. Bertie is less popular in the UK right now, but that could certainly change.

In the US, this name is far more obscure. It’s slipped most years since the turn of the twentieth century, almost leaving the Top 500 – but not quite.

Could a new prince spark revived interested in the name? Almost certainly. If you’re after a rock solid classic that’s relatively underused, Albert might be the name for you – unless, that is, a new royal baby prompts the name to rise through the ranks overnight.

What do you think – will a new prince by this name mean a big surge in use?

Originally published on February 17, 2011 at the suggestion of Jenna, this post was substantially revised and re-posted on Thursday, April 26, 2018.