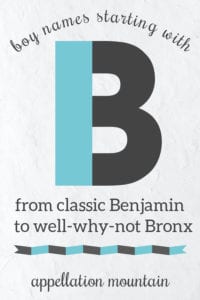 Ready for a bumper crop of boy names starting with B?

After all, B is for boy.

A handful of popular sounds dominate. There are all of the Ben names, and the Bo/Beaus. Brian has faded, but Bry- names remain in heavy rotation.

From surname names to noun names, the most popular to the fastest rising, there are boy names starting with B to appeal to every style. There’s classic Benjamin, cool Bowie, and well-why-not Bronx.

A surprising number of surname name and word name options make the list of B boy names, too.

MOST POPULAR BOY NAMES STARTING WITH B

A rock solid, Biblical classic of a name, Benjamin has history to spare. Ben Franklin makes it a Founding Father choice. Actors from Affleck to Whishaw make it familiar. Layer in athletes, politicians, writers, and more, and everyone knows a Ben.

A member of the Aiden club, Brayden claims authentic Irish roots. But, like the rest of the rhyming names, Brayden peaked a few years ago and is slowly declining. Still, the surname status of Braden might keep this one is use longer.

Speaking of surnames, Bryson has become more popular than you might guess. Bryce followed Brian up the popularity charts. Bryson feels inevitable. It’s actually a surname related to Brice, which traces it back to Saint Bricius, who served as Bishop of Tours in the 400s.

The second of many Ben names on this list, Bennett takes the sound in a twenty-first century surname direction. Strictly speaking, Bennett evolved from Benoit, the French form of Benedict. It’s the most popular of the ending-with-ett boy names, not too far ahead of Barrett and Beckett.

Take a blue-buttoned blazer straight from Brooks Brothers, pair it with the cowboy boots of country music’s Garth Brooks, and you’ll understand why this name appeals to so many parents. It’s the original preppy hellraiser name, and it’s also the fastest rising boy name of the year.

Another English surname, Braxton has raced up the charts thanks to our love of the letter X. Just ask Paxton, Jaxson, and Daxton.

So many Ben names! Bentley leans a little bit lux, thanks to the high-end British automotive manufacturer. But it’s also down-home, thanks to country music’s Dierks Bentley.

Literally the French word for handsome, Beau reads like a strong, capable name. Maybe that’s because early fictional Beaus like Geste (who joined the French foreign legion) and Beau Maverick (one of several cousins on Western television staple Maverick) made it so. It’s hard to pin down the popularity of Beau, thanks to so many Beau/Bo names, and the popularity of both spellings as a nickname.

An Old English surname, Brandon and Brendan (#564) were favorites in the 1980s and 90s. Today they feel like modern traditionals, well-established choices for our sons. It’s hard to believe that they were barely heard in the US before the middle of the twentieth century.

Yet another surname name, this time originally from a Scottish place name. It’s a likeable choice, bright and upbeat.

FAST RISING B NAMES FOR BOYS

The NFL’s Baker Mayfield helped put his unusual occupational name on the map. But it also helps that we’re so wild for ends-with-r boy names.

The hottest of the ends-with-s surname names for boys, Banks has been a name on my watchlist. A little bit money, a little bit river bank, it appeals to parents for lots of reasons.And sure enough, it debuted in the US Top 1000 this year.

Baylor owes something to the success of names like Taylor. There’s also football powerhouse Baylor University in Texas. (The school has also been wildly successful in basketball and baseball.)

Cuddly and fierce, an animal name gaining in use.

Surname name Bellamy seemed like a possibility for a daughter. But then sci fi series Teh 100 gave the name to a hero played by Australian actor Bob Morley, and everything changed.

Fiery Blaze has ranked in the Top 1000 for a few years, but now it’s the original, saintly Blaise that appeals. It strikes a balance between a bold sound and a traditional pedigree.

Oh, those Bo names! Bode – as in Olympian Miller – made this list previously. But now it’s the more phonetic Bodie on the rise. Meaning-rich Bodhi has also become a mainstream favorite.

An English surname related to Bridge – originally for someone who lived near one, or worked as a bridge keeper.

Brixton is a place name, a fashion label, and a mash-up of stylish sound popular in boys’ names today.

Scottish surname Brody is a Top 200 favorite at the moment, bringing alternate spelling Brodie along for the ride. One possible reason for the rise? Ultimate Disc League – that’s frisbee! – player Brodie Smith is a YouTube celebrity, known for his elaborate trick shots.

RARE B NAMES FOR BOYS

Every one recognizes Balthasar – or Balthazar – but no one is using it. Actor Balthazar Getty is one notable.

The name of the 44th president of the United States, this Arabic name means blessing.

A New Testament name, sometimes Barnaby in English – but seldom heard in the US either way. With names like Atticus and Benedict rising, Barnabas feels more mainstream than in earlier generations.

An Old Testament name, Boaz benefits from the zippy letter z. It also has a great meaning: swift.

To brace is to support; as a surname, it likely was given to those who made armor. It fits right in with other short, strong names like Case, Chase, and Jace.

Short for Abraham, this name brings to mind Dracula author Bram Stoker in the US. In the Netherlands, though, it’s a long-time favorite, recently ranking in the Top Ten.

The New York City borough became an unlikely candidate for a child’s name when Ashlee Simpson and Pete Wentz welcomed Bronx Mowgli in 2008. It’s gained steadily in use since then.

A seaside resort in England inspired the name of Brooklyn’s Brighton Beach. Chances are that neither place explains the name’s appeal; instead, that’s about the “bright” sound.

SURNAME NAMES BEGINNING WITH B

An unusual English surname, Ballard sounds unexpected – but just on the right side of wearable.

The California town makes this name feel slightly counter-cultural, and rather intelligent, too.

Another name linked to a frontiersman – Daniel Boone – the name comes form the French word bon – good, ultimately from the Latin.

A tough guy name, but also a nature one – breakers are heavy sea waves that “break” on shore.

Cousin to Briggs, but with an added dimension. Mountain man Jim Bridger is a folk hero in much of the American West. Accordingly, this name has reached the Top 100 in several states, including Utah.

Bert and Burt sound like given names, and they are. Burton has a different source: an Old English place name meaning “fort town.” It leans a little daring, thanks to snowboarding innovator Burton, the world’s first manufacturer of snowboards.

A poetic surname, as in Lord Byron.

WORD NAMES BEGINNING WITH B

An edible name with roots in the Greek word for king.

A nature name as reasonable today as River.

A shining light, and a sound that fits right in with Brandon and Bryson.

Like Rowan, a tree name that seems wearable for a son.

Blaise is a saint, but it’s fiery Blaze that ranks in the current US Top 1000.

Blue is the color most strongly associated with boys, making this a natural possibility for a first – or perhaps an unexpected middle.

It’s a lot of name to live up to, but in our age of Legend and Maverick, Bravery might be more wearable than ever before.

First a nickname for a reliable person, Tennessee Williams used it for a character in Cat on a Hot Tin Roof. Paul Newman played the role in the 1958 movie adaptation.

The brink is the very edge. While it’s a noun – in foreign relations, there’s brinkmanship, and we talk of being “on the brink of” things. But it’s not quite everyday speech, and that might work well for a word name.

Like Bear, Bronco is an animal name – though this one is a little more specific. It refers to an untrained – or perhaps strong-willed – horse.

What are your favorite B names for boys? What would you add to this list? 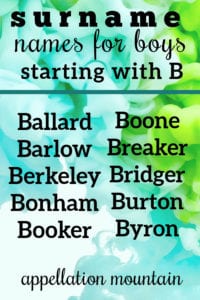 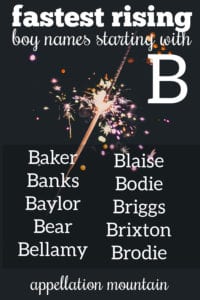