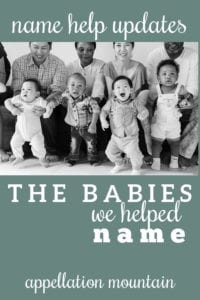 Two years ago, I wrote a post rounding up recent name help updates. While I do my best to share these on social media, they’re easy to miss.

When parents choose a name suggested in the post or the comments, I’ll admit it’s a thrill. But each and every one of the name help updates is valuable, even if the final choice ends up being wildly different than what the parents initially imagined. (These are sometimes some of the best!)

Time for another round-up!

Clare was looking for help naming twins! The new additions joined Simon Wallace and Eleanor Lacey. She wrote: We loved the suggestion of Arthur immediately, and knew that was our son’s name. I’d almost suggested it, but worried it might be too old-fashioned, but the comments here convinced me that wasn’t true. It fits him perfectly!

For Louise, we almost went with Helen, but realized it was too close to Eleanor. Frances was our favorite for a while, but the whole Franny thing bothered me. We eventually came back to this list, and really warmed to the sound of Louise, especially with Carroll (a family name) as her middle.

Karin was looking for help with a family naming tradition that she didn’t want to continue. And they didn’t – not exactly, at least. Beckett William’s name represents a fresh start and a connection to his family history.

They had her name all picked out, but then grandma – who grew up on a farm – suggested that Daisy might be a cow’s name. The #namehelp community encouraged them to stick with the name they love. Happily, Daisy is here now, and no one has said moo about it …

They had Larkin Louise, Hunter Andrew, and Parker William. But Rachel worried that her kids sounded more like a law firm that a sibset. #namehelp convinced them to go for it, and use the name they loved.

She says: “It’s not exactly Gary Jr., but it suits our son perfectly.”

Brenda was looking for a longer, not-too-popular name, and I think she got it exactly right.

She wrote:  She is called by her full name, as well as the nicknames Gwen and Gweni. I liked the nickname Evie too, but that one didn’t stick. But I love that this name is so classic, unique and elegant, but also with plenty of short and sassy nickname options too. I did debate a bit on the spelling, but ultimately I decided to stick with the real, traditional spelling. Thank you again to everyone for all of the great suggestions – picking just one name is hard …

Kara wrote that Georgia was almost Hattie, but they decided three names ending in the y/ie sound was a little too matched for them … but now they call Georgia Georgie most of the time!

They were looking for a classic girl’s name, but Casey works with kids – and, as she put it “the world already has plenty of Sophias.” They loved Margaret, but a negative association took that off the list.

Ultimately, after two days’ discussion, their daughter is Marie. And Casey says, “it fits her SO, SO well.”

Melissa wasn’t sure how to spell a family name she wanted to use, regardless of gender. They welcomed son Riley Matthew.

Melissa noted: “We were pretty set on Rylie Elizabeth for a girl, but thought a boy would be just Riley. But then, when we met our son, we thought he needed a middle name, too. Matthew just came to us. Thanks for all the help!”

They were looking for an Italian girl name to go with brothers Luca and Matteo. We helped them narrow it down to Arianna, Gianna, and Sienna. Kara tells us that they ultimately settled on her favorite: Sienna Clare.

Tiffanie had such powerful reasons for naming her older son Leo Ocean. They settled on the very handsome and strong Stone Shaw for his brother. 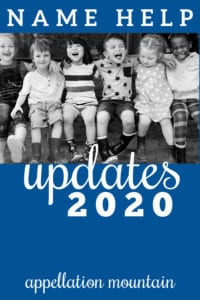 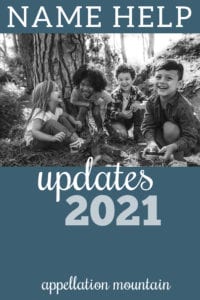