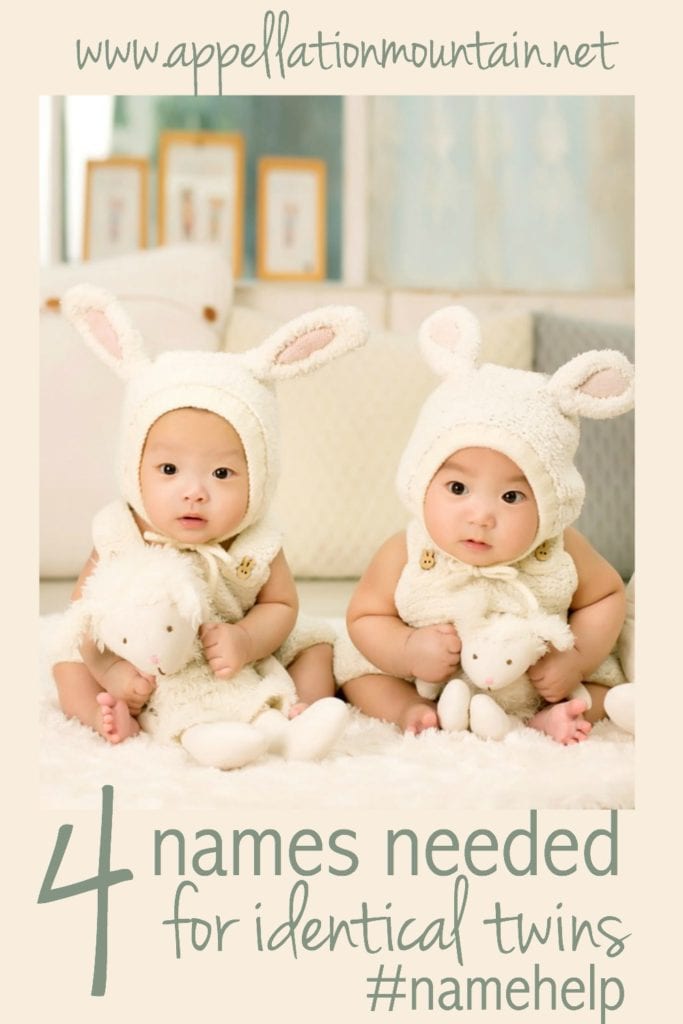 I need help naming identical twins who are coming around the end of June. We do not know if they are boys or girls, but definitely they’re the same sex.

Our first daughter was stillborn. We planned to name her Marguerite, nicknamed Daisy, for a girl, and possibly Cassius (family name) for a boy. But then her name came to me in a dream right before she was born: Anna. Her name won’t really be part of the sibset in most situations, but it does matter to us.

Our two-year-old is named Elsa. We were not aware of Frozen before we chose the name, and were a little taken aback by the association, but have not yet met other Elsas so I don’t think it’s as trendy as I worried it would be. We also did not know of the Elsa-Anna connection but it has made the name particularly special to me. The two runners-up for Elsa were Nora and Lydia.

Rather than a traditional middle name all our children have my last name and then their father’s, so we’re just looking for firsts. Both names are long. Their father’s long last name starts with a B and ends with -en, so we’re looking for names that are shorter, don’t start with B, and don’t end in -n.

Swistle often gives this wise advice about naming twins: choose your next two favorite names, as if you’re naming two children in two separate pregnancies. Which makes all the sense in the world, and I think it’s great advice. Except. I don’t think I could do it. I think naming twins must be a little bit different. I think I’d want a subtle link between the two names, but also be more sensitive about avoiding names that are too obviously matched.

Still, I’m going to take Swistle’s approach here, and hope that we can find links afterwards.

Let’s start with the girls.

It sounds like you’d like to avoid two more -a ending names. I hear what you’re saying about multiple, two-syllable, a-ending names sounding singsongy. But is it really a dealbreaker? Emma, Ava, and Mila; Ella, Sarah, and Laura. I can say lots of similar combinations without it feeling like overload. And you seem to be drawn to a-ending names, right? So it seems like a shame to discard them all.

Well, except for one. Let me suggest Thora, because it’s a strong name for a girl that rhymes with Flora, shares Thea’s Th, and is a strong, Scandi name. It comes from Thor, as in the comic book hero, but more importantly, the Norse god.

That leaves Ingrid, Astrid, Tess, and Margot from your original list. Ingrid and Astrid are great names with Norse roots – though I’m not sure if they’re too close for twin names. Tess is short for Theresa, and Margot is short for Margaret, so I wonder if that adds some appeal. Clare is another non-a ender. The French spelling Claire is much more popular at the moment, but both are spare, sophisticated picks for a daughter.

Let’s see if we can add a few more suggestions:

I looked at the most popular names in Sweden and Norway for inspiration, and here’s what leapt out at me: more than 30 of the Swedish girls’ Top 50 ended with a, and most of those where two syllables. The numbers are similar for Norway. So … it’s no surprise you’re drawn to all of those a-endings!

Let’s talk about combinations for a minute:

I’d love to hear what readers think of Ingrid and Astrid. Are they too Scandinavian with big sister Elsa? My instinct is yes – that’s the kind of combination that will have people asking you if you’re from Sweden.

Now, on to the boys. It seems like your style is even bolder when it comes to boys – many of these are not in the current US Top 1000! Though they’re all generally familiar as given names.

In this case, I’m not sure we need to add anything, especially because there’s no conflict with a-ending names.

It also sounds like Casper is the name to match, with the nickname Cas.

So what goes with Casper?

That’s not to say that other names on your list aren’t great fits, but these jumped out at me.

Readers, what would you suggest to Whitney for her twins? How do you feel about additional a-ending names if the twins are girls?