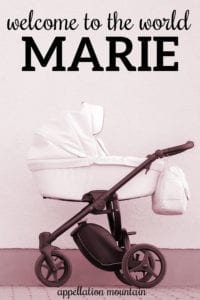 UPDATE: She’s here! Casey writes: We loved the idea of Josephine, but not with our (J) last name. Margot and the other Margaret names were great ideas, but unfortunately, it still felt too close for comfort. After pretty much ignoring it on the original list, we came back to Marie two days after she was born. And it fits her SO, SO well. Thank you, thank you, thank you!

We’re expecting our first child in October, and we’re looking for a traditional girl name. I love Margaret, but unfortunately, that’s the name of a family member my wife has a difficult relationship with.

We agree on Elizabeth, but not on a nickname. Katherine has come up, but Kate would probably be Katie, and that’s too close to my name.

I think we’re in a negative pattern, where we both look for reasons names won’t work. I’m still kind of stuck on Margaret, even though I know we can’t use it. My wife really likes Sophia, but I work with children, and the world already has plenty of Sophias.

Her middle name will be my wife’s last name, which is long and Italian. We’re using my two-syllable, starts-with-J, ends-with-son, very common last name for our daughter.

Congrats on your daughter!

Also, it’s great that you can identify that awkward place: you’ve both gotten in the habit of rejecting names, when you’re supposed to be falling in love with a name!

I’m wondering if there’s a subtle style divide between you and your wife? Sophia and Margaret both count as classics. But backpacking the Grand Canyon and a luxury resort in the Maldives are both travel. The gap between Sophia and Margaret isn’t that vast … but I think it’s worth trying to find names that are slightly more feminine, while still feeling substantial.

I think Beatrice splits the difference between Margaret and Sophia beautifully. It’s classic, but with a certain romance. The -trice ending is far more familiar in the US today, but if you’re wild about Trixie as a nickname, the -trix ending works, too.

This might be a little too out-there. But Cosima has deep roots, and it reminds me so much of Sophia.

Louise feels like a sister for Margaret. But I’d name Sophia’s sister Louisa … or maybe Eloise. I think all of them work as substitutes.

There’s something antique, maybe even dainty about Frances. And yet, it’s a capable, classic name, too.

This would be my top pick for you. Except. Could you agree on a pronunciation? And would it bother you to have to reinforce that pronunciation? If you’d like to use a nickname, that’s an easy way to work backwards to a pronunciation. Like Nell? Then it’s heh LEN uh. Prefer Laney? It’s heh LAY nuh.

Josephine shares Margaret’s traditional style. And yet, I think the sound edges a little closer to Sophia.

MARY or MARIE or MARIA or MARIANNE

At first glance, any Mary name is easily dismissed as over-used. Except they’re not. Not even a little! Mary and Maria both fail to make the US Top 100. Marie sits in the 500s. And Marianne? Doesn’t make the Top 1000. (Though Mariana and Marianna do.) Any of them might hit exactly the right note.

Short and strong, Ruth shares the no-nonsense style of Margaret. But Ruthie makes it very wearable for a child.

Overall, my favorite for you is Josephine. It’s long, like Margaret; lovely, like Sophia; and while it’s easily shortened to a nickname – take your pick! – it can be used in full.

My only hesitation is your surname. I love the way Josephine J—n sounds together, but alliteration isn’t for everyone. If that’s an issue for you, I wonder if you’d consider Marie? I think it hits the same notes, but without the repeating initials.

Readers, over to you: what would you suggest for parents who like Margaret, but can’t use it, and maybe like Sophia, too?