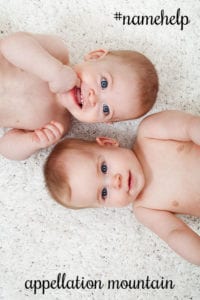 Welcome to the world, Arthur Branden and Louise Carroll!

Clare writes: We loved the suggestion of Arthur immediately, and knew that was our son’s name. I’d almost suggested it, but worried it might be too old-fashioned, but the comments here convinced me that wasn’t true. It fits him perfectly!

For Louise, we almost went with Helen, but realized it was too close to Eleanor. Frances was our favorite for a while, but the whole Franny thing bothered me. We eventually came back to this list, and really warmed to the sound of Louise, especially with Carroll (a family name) as her middle.

We appreciate all the help and great suggestions!

My husband and I both come from big families, so we have lots of nieces, nephews, and cousins, creating a list of can’t-use names a mile long. We have two children, Simon Wallace and Eleanor Lacey. Wallace and Lacey both have significance to us. The first names are names we liked.

Now we’re expecting boy-girl twins, and we have a lot of rules, and it feels really hard to come up with names.

I don’t think we’re fussy, it’s just that every name that we would consider is either taken already or violates a rule. (For example, I do like Isaac, Peter, and Isabelle.) We’re lucky enough to see lots of our family pretty often. (Two of my husband’s siblings have kids in the same school where Simon will start in the fall, and my brother just got married and moved a few blocks away from us.)

Big families are great, but yes – it is easy to feel like every name is spoken for, especially if some of your siblings started their families first.

Still, I think you know what you want: traditional names that can’t be easily shortened. That’s a pretty clear direction. It’s just a question of working through the options until you find two that don’t conflict with your surname – and aren’t already taken.

I’m also going to assume that most of the more common names – William, James, Joseph, John, Katherine, Margaret, etc. – are already spoken for, and focus on names that are a little less popular.

Arthur – Like Simon, Arthur is a traditionally masculine name with tons of history. But it’s not Top 100 today, and so I wonder if that makes it just different enough? From King Arthur to Arthur Curry, there are plenty of dashing examples of this name wearing well.

Benedict – I know you’re wary of nicknames, but if your Eleanor isn’t Ellie, then there’s no reason why Benedict would have to be Ben. And I think it pairs perfectly with your old kids’ names.

Conrad – Nothing sounds quite like Conrad, I think. It’s another name that we all recognize, but few of us are using.

Malcolm – I suppose Malcolm could shorten to Mal, but it’s a mere two syllables. It works perfectly in full.

Vincent – From saints to world-changing artist van Gogh, Vincent has plenty of noteworthy namesakes. Like Gregory, Vincent works best when it’s not shortened.

Dorothy – Storybook Dorothy feels vintage and adventurous. It’s cousin to Theodore – they both mean gift of God – but relatively rare.

Louise – Like Eleanor, Louise is tailored and traditional. It’s classic, and while lots of Lou- names are wildly popular these days, Louise isn’t nearly the chart-topper that Lucy or Luna has become.

Margot – Margaret almost begs to be shortened (though I do know at least one who doesn’t), but Margot? It works beautifully in full.

Miriam – I thought about Mary and Marie, but I think Miriam is the name that fits best with Eleanor and Simon.

Rosalie – You said no to word names, but maybe Rosalie is different enough?

Vera – Short and sweet, Vera fits with names like Ava, but isn’t nearly as popular.

Overall, I think my favorites are Conrad and Margot. They’re not likely to be shortened, and they feel compatible with each other, and with Eleanor and Simon, too.

What would you name boy-girl twins to go with Eleanor and Simon?