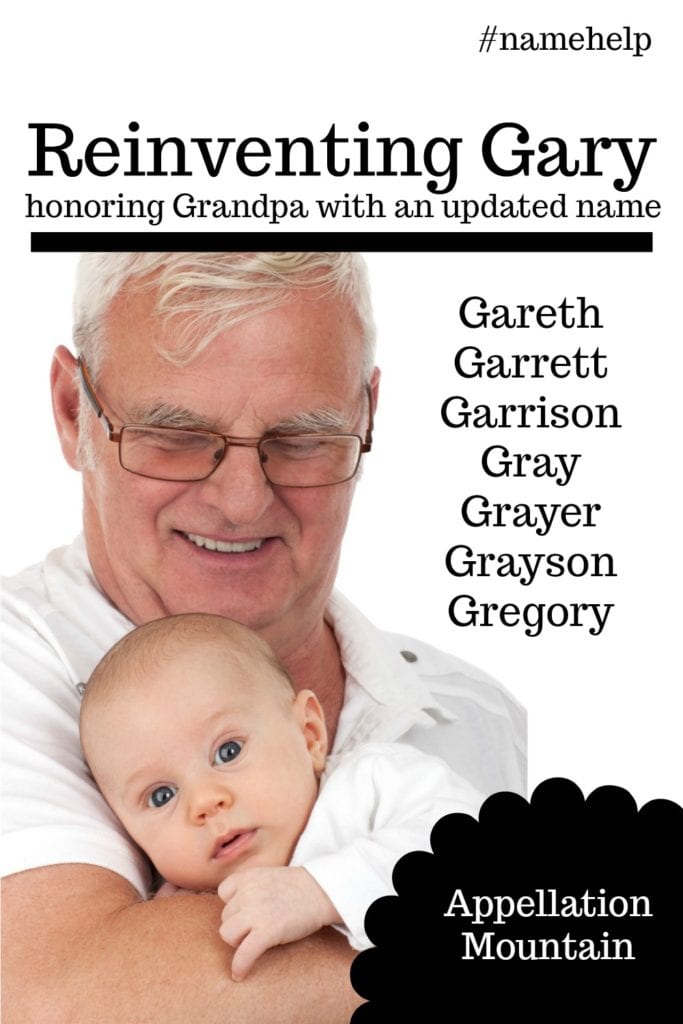 Updated: We named his Grayson! It’s not exactly Gary Jr., but it suits our son perfectly. Thanks for your help and all the great suggestions!

We want to name our son, due in August, after my grandfather. His name is Gary. We thought about using Gary as a middle name, but it doesn’t feel like enough. But can you name a baby Gary in 2017, or is that kind of like naming your baby Wilford Brimley?

Our son will be the first great-grandson in our family, and my grandfather is still a big part of our lives. So it’s important that Pops feel like the name is for him.

Our daughter’s name is Sienna Rose. We liked the way Rose sounded with Sienna, and my boyfriend’s grandmother was named Rosalie, so that made it even better.

Before we knew Sienna was a girl, we considered Carter, Mason, and Cameron.

My grandfather’s last name is one of those long Polish -ski names, so that’s not an option. He doesn’t have a middle name, and other than Pops, he doesn’t really have a nickname, either.

While Gary gets a lot of press as a name nearing extinction, that’s not quite the truth. Gary has appeared in the US Top 1000 every year since 1900. It comes from a Germanic element meaning spear. Look around, and you’ll find dozens (and dozens!) of names related to Gary. Believe it or not, Oscar, Roger, and Jarvis are all cousins – though some are more distant than others.

You have a few options if you’d like to honor grandpa Gary:

I suspect that you’d prefer the third option. First, you’ve written in for #namehelp. That suggests you have some very real hesitations about using Gary. Second, your daughter’s name is light, feminine, and very on-trend for a child born in this decade. It’s tough to imagine Sienna’s brother being Gary; or, more to the point, it’s tough to imagine the same parents choosing Sienna and Gary. And the boys’ names you considered last time reinforce that impression.

Reinventing Gary: Or Not …

If I’m wrong, let me assure you that Gary works just fine in 2017. Might a few people raise an eyebrow? Sure. But criticizing baby names feels too much like sport these days. If you feel strongly that Gary, as a given name, best honors your grandpa, go for it.

One more thought: if Gary hadn’t caught on in such a big way mid-century, Gary could fit right in with so many popular names now. Henry, Wesley, Brody … Gary stands out because we associate the name with older men – our dentist or favorite high school teacher or, in this case, your beloved grandpa.

As for using Gary as a middle, I kind of love two-syllable, ends-in-y middles, like Riley, Mary, and, yes, Gary. Kate Hudson’s middle name is Garry, in memory of her uncle.

But back to the third approach! Let’s talk names that work as Gary honor names.

I initially asked this question on Facebook and Twitter. These names came up most frequently as the best candidates for reinventing Gary for your son.

Gareth – Gareth feels vaguely British, and indeed, it’s been far more popular in the UK than the US. But we all recognize the name. It comes from King Arthur’s Knights of the Round Table, which is always a pleasing association.

Garrett – Garrett evolved as a surname from names like Gerard and Gerald, both cousins to Gary. It picked up some popularity – and a Western, cowboy vibe – thanks to Pat Garrett, the sheriff who shot Billy the Kid.

Garrison – If Gareth leans English and Garrett old West, then Garrison isn’t quite either. It feels a little preppy and polished, a brother for Emerson or Harrison. But to garrison is to store or protect, and so a garrison can refer to a fortress. It also can mean the troops themselves. In an age when we name children for weapons, that’s not necessarily a dealbreaker. Plus, writer and humorist Garrison Keillor keeps it familiar.

Gray – Reverse the ‘a’ and the ‘r’ to get Gray, a promising Gary update. Short, modern, and unexpected, I’ve heard of a few Grays named after Garys.

Grayer – If we’re working with Gray, then Grayer emerges as another option.

Grayson – The downside to Grayson: it’s such a popular boys’ name, no one will imagine it honors a grandpa Gary. Or is that the upside? If subtle appeals to you, then Grayson might work.

Gregory – If Gary feels like a grandpa name, I tend to think of Greg as a dad name. And yet, more than one person suggested this as an expanded form of Gary, so I’ll leave it here for your consideration.

My sense is that Garrett or Garrison makes a lot of sense for you. It clearly relates to Gary’s gar sound, and yet it feels fresh and modern, a fitting brother for Sienna Rose.

But let’s have a poll, because I think it’s helpful to get a quick snapshot of how others would approach the same challenge.

I should also note that more suggestions are welcome. Names like Garrick and Garence came up during our initial discussion, and one of those might be exactly what Shay is after!

Readers, please vote, and please let us know how you feel about reinventing names for the new generation. The best approach? Or does it make it less of an honor name?