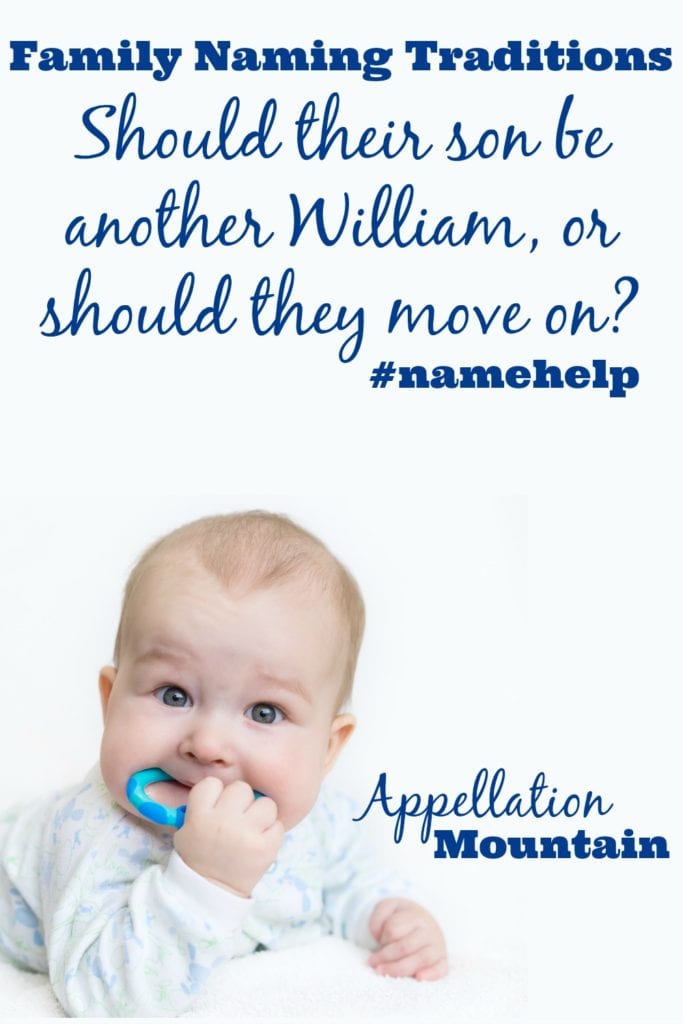 UPDATE: They named him Beckett William, keeping the family name, but updating the tradition … just a little.

I love my husband’s family, but I hate this wacky tradition they have when it comes to naming their sons.

They name all of their sons William. None of them are called William in real life.

That’s right. My husband is named William Craig legally, but I only knew him as Craig for months. Months! No one knows he is William, except for insurance forms and tax documents. His brother, dad, and two uncles? All named William, but known by their middles instead.

There’s also a cousin William, who is actually Will, and doesn’t have kids of his own yet.

I strongly prefer that we use William as a middle name, or not at all. My husband likes the idea of keeping the tradition, at least with this son. (Even he agrees that naming two boys William in the same family is too much.)

I like Beckett, Hudson, Jackson – but maybe too popular?!, Holden, and maybe Blake. (But Blake with our last name sounds too short.)

We also have a daughter named Everly Aerin – no family connection, just a named we loved!

What do we do?

Our last name sounds like House with an R.

Please read on for my suggestions, and leave your own helpful thoughts in the comments.

Wow! Family traditions can complicate baby naming, but this one is a doozy.

If I understand it correctly, naming your son William and calling him William is off the table. That leaves:

Option #1 preserves family tradition, but feels unreasonable to you. Option #2 maintains the family name, but alters the pattern carried over two – or is it three? – generations.

I use my middle name in everyday life. It occasionally complicates things. In addition, our daughter answers to a nickname very different from her given name. Again, it makes things weird every once in a while. But overall? I’m guessing your husband finds it a small inconvenience, and maybe a fun story to tell. Or at least that’s my take.

But let’s revisit the question. If you asked, “Is it okay to continue this tradition?” then I would say yes. Especially since your husband agrees that this is a one-son-and-done case.

Your question makes it clear that you’re not wild about the tradition. I love family names, and can argue in favor of using them.

But good reasons abound to avoid family names, too. The fact that one partner dislikes the family name – or even the idea of family names – serves as a very good reason to avoid the practice entirely.

And yet, you’re arguing in favor of adapting the tradition. That raises an important note. My fellow name blogger, Swistle, once wrote:

… traditions end up being most pleasing and least burdensome when they’re FLEXIBLE.

I wonder if it is all about presentation. It’s one thing to say, “It is ridiculous to name our son William, but call him Middle instead.” It’s another thing to explain, “I love your family, and respect your tradition, but I prefer to adapt this tradition by using William as a middle name.”

And then you can move on to the far more interesting task of choosing the name you’ll actually call your son!

Because here’s the thing: compromise is the key to naming children. (And so much in relationships, right?) Compromising by naming your son First William seems like the only reasonable approach to this situation.

Readers, am I wrong? Are there other approaches I’ve overlooked? Have you ever dealt with conflict over a family naming tradition?