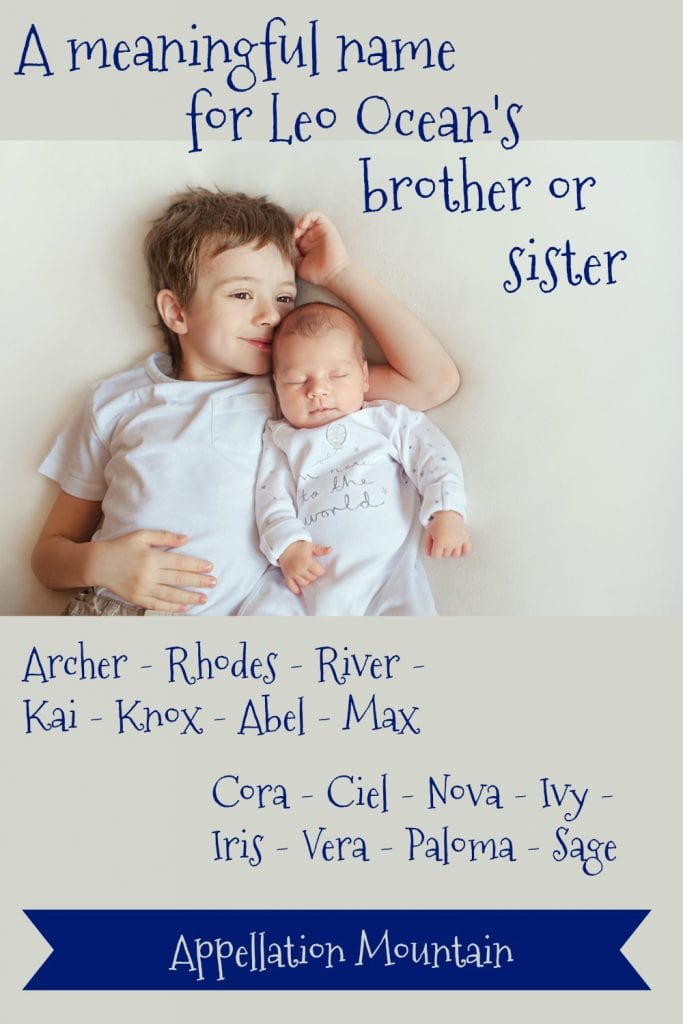 Welcome to the world, Stone Shaw! Congrats to Tiffanie & family, and thanks for the update.

PS – If you have a #namehelp update, please email appmtn@gmail.com. We’d love to celebrate with you and your family.

My son’s name is Leo Ocean. I basically took my two favorite boy names and used them both, placing the “safer” of the names in the first name spot. My son answers to both names together or separately, using mostly “Leo” at school and mostly “Ocean” at home.

Names matter to me A WHOLE LOT. I obsess over name lists in my free time. The problem is, my style is too diverse and I cannot hone in on one name!

Another big problem is that I have to find a very deep and personal connection in order to choose a final name. My son’s name, for example, was chosen very thoughtfully. He was adopted at 3 years old from a fragile situation. I chose a name that would make him feel strong and powerful (Leo) and still vast and delicate (Ocean). That type of symbolism is what I cannot seem to uncover for my second child. I fear no other boy name will ever mean so much to me.

We decided to keep the sex of the baby a surprise. To prepare I have unisex names and a few girl names. Although my gut tells me it will be a boy. Names I tend to stay away from are all of the -ayden names, names with difficult spelling and names with negative meanings.

Boys: Indigo, Rhodes (love the nickname “Ro” but not Rowan or Roman)

I sometimes hesitate to answer questions about meaning because, well, meaning tends to be highly personal.

And yet, it sounds like you’re looking for names that have more universal meanings. It’s not about honoring a beloved uncle or finding names from your favorite books. It’s choosing a name that conveys a far more easily recognized meaning. I think we can help with that!

Rhodes – Rhodes brings to mind strength, probably because of the ancient Colossus of Rhodes. There’s also the association with Rhodes Scholars. Several theories explain the origin of the Greek island of Rhodes’ name, including rose and pomegranate. I think the first two associations are far stronger.

Ivy – Ivy tends to connote wisdom and scholarship, thanks to the Ivy League. In Celtic tradition, it also symbolizes enduring love and friendship, because of the way the plant grows.

Max – Max manages to combine two things: the idea of greatness – think maximum – and a completely traditional name for a son.

It sounds like you’d prefer to duplicate the Leo Ocean pattern, using a more familiar first with an uncommon middle. That means that Ivy works wonderfully for a daughter and Max for a son; but I tend to think Rhodes might be more like Ocean than Leo.

Let’s see if we can add a few generally meaningful names to the mix, all somewhere around the 1oo to 300 mark in the US.

Abel – A Biblical boy name that sounds capable, thanks to homonym able.

Kai – The Hawaiian word for ocean, and a nice mirror to Leo’s middle.

River – Another nature name, like Ocean, but one that is considered far more mainstream.

Knox – Shares the sound of Max, but feels a little more modern. While it means hill, the cultural association in the US is with treasure – as in the gold depository at Fort Knox.

Archer – Archers hit their mark, tying this name to ideas about achievement and skill.

Cora – Cora likely means maiden, but tends to be associated with the Latin cor – heart.

Willow – We think of Willows as weeping, but they symbolize healing, too.

Nova – From the Latin word for new, Nova is strongly associated with all things science, but especially the stars.

Vera – From a Russian word meaning faith, we tend to associate Vera with the Latin verus – truth.

I’m not sure any of these unseat Ivy, but I feel like Nova might appeal to you.

Max Rhodes sounds too much like a phrase to my ear. Maybe Max Lyric, for something poetic and unexpected. Or Max Wilder or Max Briar, for middles that take the name in a more outdoorsy direction.

For girls, I think Ivy Rhodes has potential. For something more feminine in the middle spot, there’s Ivy Paloma – wisdom and peace. Paloma is the Spanish word for dove, hence the symbolism.

Nova Florence combines the new with the Italian city famed for the arts.

I also love the idea of Cora Sage – heart and wisdom.

Depending on how you feel about the seasons, I think Winter could make a great middle, too: Ivy Winter, Cora Winter.

Another bold middle name choice: Ciel or Cielo, the French and Spanish words for sky, and also heaven. Cora Ciel might be my favorite.

So if I had to choose, I’d lean towards Archer Rhodes and Cora Ciel. But readers, I know you will have some fabulous ideas!

What would you name a brother or sister for Leo Ocean?