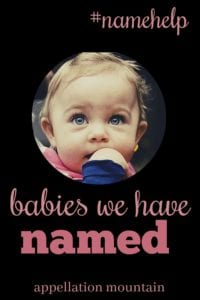 Curious about babies we have named?

After all, #namehelp posts have been running for ages. The first one was posted all the way back in October of 2014. In other words? Some of those babies we have named are walking, talking, and probably headed to preschool in a few weeks.

Babies We Have Named: Vincent Ford

Babies We Have Named: Clover Mildred

A mom started out looking for strong names for girls, and ended up using something a little different. Baby number seven turned out to be lucky Clover!

Babies We Have Named: Quinn

Giacor was expecting her first, and looking for a Southern name for a girl, and advice about using family names for a boy. As it happened, they had a son, and stuck with James Joseph V. But they call him by the one of the nicknames we discussed in the post – Quinn. Such a good solution!

Naomi chose a gorgeous name for her third child, a sister for Lauchlan and Cordelia. I’m so glad they chose it – it was my favorite!

Babies We Have Named: Sullivan Kate

Sullivan “Liv” Kate wasn’t on Emilie’s original list, or on my suggestions. But I think it’s the perfect solution to her hunt for a unisex name for a daughter.

Babies We Have Named: William Michael

Kate and her husband went with William “Will” Michael for their first child together. Michael is dad’s name, and William comes from Kate’s side.

Babies We Have Named: Brooks Roosevelt

Melissa adored her daughter’s name, Eliot Montgomery, so much that she thought they’d never top it! But I think the name they chose works beautifully well: Brooks Roosevelt.

Babies We Have Named: Cressida Caye

Cressida Caye’s middle name mirrors her older sisters: May and Shae. But it also potentially allows the family to use the nickname Cece, which is what prompted her parents to ask for help in the first place.

Babies We Have Named: Rose Bethany

Jane Ashley and Claire Samantha were joined by little sister Rose Bethany. The middle name is a nod to grandmother Beth.

Babies We Have Named: Betsy Rupert

And that’s just the very first year of babies we have named! We’ll pick up with November 2015 onward in the next installment.

Got an update to your #namehelp post? Email it to appmtn (at) gmail, or post it here and I’ll include it in a future edition!