My husband and I were only expecting to have one child together, so we picked a name for our daughter that fit the pattern set with his two older children from a previous relationship. His older two children are son Laramie Arden and daughter Malarie May. Our daughter together is Naomi Shae.

We decided to have another and are forgoing the pattern. We’ve already picked a name we love for the first name – Cressida! We’re saying it just like it’s spelled, Cress-ih-dah.

There are two problems.

My husband likes Kay because it follows the patterns of the older two girls, and I like the alliteration of the two hard “kah” sounds, but I just don’t love Kay. I’m also not sure what nickname we could draw from this.

I have been trying to get to Cece as a nickname by finding another C middle name. I love the sound of Cressida Christine, but we’re not religious and I worry about the religious origin of Christine. I’m open to names that start with completely different sounds as well!

Do you have any thoughts on middle names that could be used to suggest an alternate nickname? Or even other nicknames we could pull right from Cressida?

We’re getting a little desperate as we have less than six weeks left. Thanks for your help! 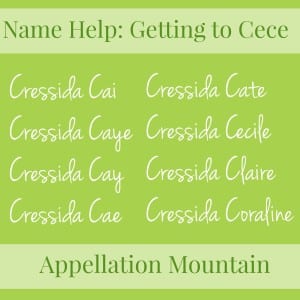 I love the list of girls’ names you considered. And I’m delighted that you made the decision to break the pattern. There’s nothing wrong with sticking to a pattern, of course. But if none of the names that you love work, it’s best to move on.

Cressida is a gorgeous name, but Cressy? I share your hesitation about that nickname!

I do think Cress has some appeal. But that’s probably because I devoured the first few books in this YA series, The Lunar Chronicles. It’s a collection of fairytales set in a dystopian future. Cress is short for Crescent Moon, and she’s the Rapunzel-like figure. Also, a ninja with all things tech.

But Cress would inevitably lead to Cressy, so I don’t think you can go there.

Cece is a great alternative. Some well-meaning types will almost certainly tell you, “just don’t let them call her that!” But I think the more practical, diplomatic approach is to offer a nickname you do like.

A few other possibilities that are hiding in Cressida: Resa, Rida (like Rita, but with a d), Ida, Iddie, Essie, and Sidda.

I do think Cece is your best bet. You don’t necessarily need a C middle name to get to Cece, either. The soft ‘c’ sound is in Cressida. Cressida Jane could be Cece just as easily as Cressida Christine.

Of course, your daughter still needs a middle name, so let’s look at some options:

Cressida Cai  – I thought of this as soon as I saw Kay suggested. Cai sounds like Kai and rye, so it breaks the pattern. But Sir Kay in Arthurian legend was also called Kai or Cai, possibly from the Latin name Gaius. Cai is the Welsh spelling, and typically masculine, but not unknown for girls.

Cressida Cay or Cressida Cae or even Cressida Caye – If Kate can be spelled Cate, then there’s no reason Kay can’t also take a C and be spelled Cae, Cay, or Caye. Cay adds a nature name element to the name, since cay is another word for key, as in Key West. And, of course, it fits your pattern exactly while giving you the initials C.C.

Cressida Cate – Almost just like Kay. Or Cay. But not exactly.

Cressida Cecile – Cecilia is a famous saint, but I don’t think this name feels religious at all – and Cecile comes from a Roman family name, so no religious roots. When I was thinking of alternatives to Christine, Cecile immediately came to mind.

Cressida Claire – Is this too plain, or maybe too obvious? Claire – this spelling – is currently in the US Top 100, and is one of the most natural ways to get to the initials you like.

Cressida Rae, Cressida Bay, or Cressida Jay – None of them get to the initials C.C., but they continue the May/Shae sound. Other possibilities with the long ‘a’ sound that don’t quite rhyme: Jane, Lane, Gray, and there must be a dozen more!

Cressida Elise – I noticed Eloise on your shortlist. Elise doesn’t have the same spunkiness of Eloise, but the sound is close. If none of the C names feel like a good fit, Elise could be a great alternative.

Readers, are there are other middle names that you would suggest to go with Cressida? Or are there other Cressida nicknames that might work?

UPDATE: She’s here! Thanks to Amber for stopping by to let us know that Cressida Caye arrived in June 2015. Wishing the family all the best.