We’re expecting our third child in a few weeks. If it was a boy, he would have been David. (It’s been our favorite boy name since we started having kids!) But it’s a girl, and we’re stuck.

Our last name is long, Polish, starts with a K, ends with a -ski, almost like Jane Krakowski, the actress from 30 Rock. (Which has been a little weird with our older daughter’s name, but too late now.)

Our daughters are Jane Ashley and Claire Samantha. Jane because I’ve always loved it, and Ashley for my husband’s sister, who passed away before Jane was born. Claire was a name we agreed on immediately, and Samantha is for my grandfather.

We really like short names with strong sounds, but names that are definitely meant for girls. One possibility is Kate, but is Kate too popular? We’ve already met two other Claires around the same age as our daughter.

My mother-in-law is Beth, which could work. But I’d rather keep the family names as middles.

Lastly, we’ve thought about Mae or May, but is that too short?

So do we go with Kate? Or are there other names we haven’t thought of yet?

Read on for my reply, and please share your thoughtful suggestions in the comments!

At first, it seems like this should be easy. But the longer I thought about it, I realized that the list of names that really fit your criteria isn’t all that long!

We’re looking for a name that is: 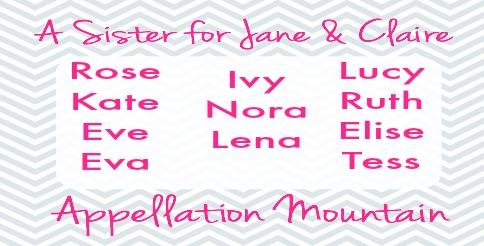 So no Reese or Sloane, but also no Isabella or Louisa.

It sounds like you’re also looking for a name that’s not too popular – or at least one that is less common than Claire. Claire ranked #44 in 2014, while Jane came in at #322, so there’s a range.

Let’s pause for a quick word on popularity. There are lots of lists of names – the national data, state data, and, of course, Kelli’s brilliant Playground Analysis that looks at combined spellings. But there’s also something that I think of as hyper-local popularity. We often have a lot in common with our friends, neighbors, and the other parents at nursery school/playgroup/swim lessons. It’s no surprise that we like the same baby names, too.

In other words, when you’re among friends and loved ones, there’s a greater chance that you’ll hear the names you like repeating. So while looking at statistics can be helpful, it can also be maddening, when your relatively unusual name repeats anyway.

Now, on to the suggestions. I’ve stuck with shorter names, but not necessarily just one syllable. When I think about your name (Sarah almost-Krakowski), it seems like a two-syllable first name really does work beautifully. But if you’d prefer to stick with a single syllable, there are some great options there, too.

Rose – Classic Rose is often tucked in the middle name spot, but Rose is great as a given name, too. Rose is feminine, straightforward, and strong. Plus, all three names have distinctly different sounds, even though they’re all just one syllable. Jane, Claire, and Rose – I think that’s perfection.

Kate – Kate seems like another strong contender. Kate ranked #207 in 2014, compared to Rose at #194. Neither seems overly popular. Then again, there are lot of girls named Kaitlyn – choose your spelling – and Katherine, currently at #82, is often shortened to Kate. Layer in countless Kaylas and Kaylees, and the Kay sound is very common. Still, I don’t know if that really takes away from classic Kate. Even if you hadn’t mentioned it, I’m sure I would have suggested the name!

Eve/Eva – Like Mae, Eve is a true mini name. Three letters, one syllable, a very spare sound. I wonder if Eva might appeal to you more? Jane, Claire, and Eva. I think they work together nicely. One hesitation: Eve and Eva might share some of the same pitfalls that Kate shares. Names starting with Ev- are very in vogue at the moment.

Nora – Eva makes me think of Nora. Except that Nora is just inside the US Top 50 right now, so that might be slightly more popular than you’d like. But doesn’t Nora sound like a sister for Jane and Claire?  A possible alternative to Nora might be Lena, which ranked #279 in 2014.

Lucy – This is the name that instantly came to mind. I can easily imagine sisters called Jane, Claire, and Lucy. Lou, Liv, and Lux are shorter L names, but none seem quite your style. Lucy has the same vintage-classic vibe as your daughter’s names. All three are at home in a storybook or a science lab.

Ruth – At first, Ruth might seem a little fustier and dustier than Jane and Claire. But vintage, buttoned-up Ruth is very much on the comeback. Ruth ranked #314 in 2014. If you’re considered that Mae is a little short on sound and Kate is too common, Ruth could be a great alternative.

Elise – Gentle Elise is a form of Elizabeth that hits the sweet spot in terms of popularity – less in fashion than Claire, slightly more familiar than Jane.

Tess – One last thought – Tess! Theresa and Terri are very much out of favor, but nickname Tess feels quite current. Tessa ranked #221 in 2014. Tess doesn’t rank in the US Top 1000, but I think it would be immediately understood as a girl’s given name. Jane, Claire, and Tess.

Readers, we have an update from Sarah! She writes: Thanks so much for the help!! We were stuck on Kate or Mae until we went to the hospital, but when she was born, she was so obviously a Rose! We almost named her Rose Elizabeth, the middle name for my mother-in-law. But my mother-in-law dislikes Elizabeth, so we named her Rose Bethany instead. We’re all madly in love – and she wouldn’t have her name without you!