UPDATE: She’s here! Scroll to the end of the post to discover the great name Renee and her husband chose for their new addition!

My husband and I are expecting our second daughter in late November, a little sister for Georgia Louise.

The name Georgia is so perfect for us. There are Georges in both of our families, plus my maternal grandmother’s middle name was Georgina. We love the name because it’s spunky and strong and we hadn’t heard it on anyone except a neighbour our age. We know now that it’s more common than we thought … not super happy about that but no regrets about her name because it suits her perfectly.

We’ve given up trying to find a name as epic to honour family.

I like names that age well and would rather err on the side of too dusty than too cutesy.

Our children will have my husband’s surname which is Hick but add an Sc to the front. It’s a nightmare to pair! I had to give up one of my favourites (Holly) for this reason and most one-syllable names are out as they’re too abrupt (so long Tess and Quinn.)

Here is our current list, along with some questions:

I’d love to hear your thoughts on this! We’re open to suggestions, though it does feel like we’ve scoured every possibility.

Read on for my reply, and please leave your thoughtful ideas and suggestions in the comments.

Georgia Louise is lovely. It does sound like the stars aligned when you chose your daughter’s name!

Which makes you yet another victim of We-Already-Used-Our-Favorite-Name syndrome.

And yet, you’ve got some great options on your list. Before we take a look at them, let’s talk about your questions.

Should we worry that this name is a dog name?

Okay, that’s easy for me to say. My favorite baby name is *not* also the name of my in-law’s beloved deceased pet. However, what I do know is this: the overlap between popular baby names and popular pet names is huge. Maggie is popular for dogs. So are Charlie, Max, Bella, and Daisy. I know dogs named Molly, Luna, and Jake. We’d all have to rule out an awful lot of great names if the canine top ten were off limits.

Can we use my sister-in-law’s mom’s name?

Let’s say you live in sunny California. Your brother and sister-in-law live in Texas. And her mom? Well, she’s long since retired to Florida. 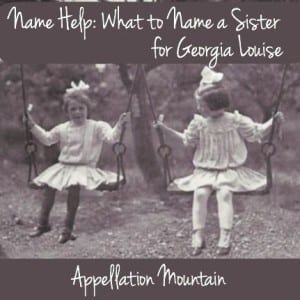 But if you all live in the same small town and bump into each other at the grocery store? That’s dicier. Even if you all attend the same family gatherings a few times a year, that can be potentially awkward, for all the reasons you’ve identified.

It doesn’t mean you have to cross the name off your list. But if that other Margo were someone I’d see often? I might.

Still Maggie and Margo could definitely stay on your lists.

And now, a question from me: what’s the reason you’re ruling out names that are feminine equivalents of classic masculine names? Do you fear being stuck in a pattern? Or is it something else? Because I do think Frances is a great sister name for Georgia, and there are others, like Harriet, that could be great, too.

Here’s my take on your list, starting with my favorite choice for your daughter.

Adele – Georgia and Adele are a sweetly vintage pair. They’re both formal names that could be shortened – but don’t necessarily invite nicknames. Adele goes nicely with your challenging surname. A perfect fit – except if you were really sold on Adele, I feel like you wouldn’t be writing.

Frances – Is your rule about no-more-feminine-forms one that was made to be broken? Because, like Georgia and Adele, Georgia and Frances are delightfully old-fashioned, but with lots of spirit. They sound like sisters from the 1880s – and yet are very much a modern match-up, too. (As for the former neighbor named Frank, who’s married to Georgia? I wouldn’t fret.)

Maggie – I love the way Maggie stands up to your surname. Georgia and Maggie sound like sisters. And while I’m a fan of formal names, there’s plenty of history for using just Maggie. Assuming you can overcome the canine connection – and I think you should! – Maggie is a great possibility.

Margo – This would be my #1 choice except I’m not clear if your sister-in-law’s mom is really a dealbreaker or not.

Cleo – It’s funny to talk about such an ancient name not aging well. After all, the most famous of the Cleopatras died in 30 BC. But I know what you mean. Still, I think Cleo is more substantial than Lulu or Gigi. No one really expects Cleo to be short for anything. And Cleo’s heyday, at least in the US, was the 1910s – meaning that the name is a vintage revival, not an only-in-2015 oddity. All together, I think Georgia and Cleo are good together, but Cleo does feel different from your other choices, so I wonder if it’s really singing to you?

Roseanne – Another lovely, graceful possibility. It’s been ages since Roseanne was on television, so I think the name is quite wearable. I was tempted to suggest just Rose – until I trying saying it with your surname. Doesn’t really work, does it? And yet, something about Roseanne gives me pause. Maybe it’s this: with all the family associations, Roseanne ought to feel like the obvious, go-to name for Georgia’s little sister. So if you haven’t embraced it, maybe that’s because it’s not quite right. I wouldn’t worry about your tendency to shorten it. Plenty of families have one child with a nickname and one who uses his or her full name. But, like Cleo and Adele, I feel like if this was The Name, you wouldn’t still be deciding.

Annarose – If Roseanne isn’t quite it, do you like the names better in reverse order? Annarose is gorgeous and unexpected, too.

Dorothy – Most of the names on your list are two syllables, but seeing Annarose made me think about the possibilities of three-syllable names.

Helen – Hazel is out, so how ’bout Helen? Every bit as vintage and classic, but so underused.

Instead of coming up with more suggestions, let’s have a poll. I’d love to see which name comes out on top!

Readers, which name gets your vote? 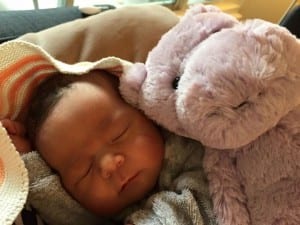 UPDATE: Hi Abby! Wanted to update on Georgia Louise’s baby sister. She’s here! smile emoticon Our shortlist wasn’t doing it for us, so we tossed it and brainstormed ways to tie-in to her great-Grandmom Betty (they happen share a birthday and maybe even a feisty and sweet personaliy) so… Betsy Rupert! The middle name is an ode to the park where my husband and I met and we’ll never get to use the name on a son. So Lil Betsy Roo she is. Thanks to you and all your readers for talking us through our name dilemma!