It’s time to talk about naming a girl!

Naomi and her husband are expecting baby #3, a little sister for Lauchlan Ezra and Cordelia Ruth.

We stumbled quite accidentally into a family-name theme. Our son was given my mother’s maiden name as his first name, mainly because we liked the name.

Our daughter’s name had been my favourite for a long time, and my husband loved Cora, so it was perfect. We only realised after she was born that her name was an anagram of sorts of her grandmothers’ names (Carol and Carole).

We’re now expecting our third baby – a girl! – and struggling with whether to continue this theme. We have a list of names we love, but none have any connection to either of our families.

We currently live in Glasgow, Scotland, but we’re both originally come from the south east of England. Our tastes run a little outside the norm for Scotland (where Isla, Freya and Sophie have taken over), but our circle of friends and colleagues have children with similarly unusual names.

Read on to learn more about their dilemma, as well as my suggestions – and please add your thoughts and ideas, especially if you’re in the UK!

Can I first say that I love your children’s names? Literary, meaningful, and easily recognized without being at all common – exactly what so many parents are after!

I’m confident that you’ll find a great name.  Let’s start by looking at your current lists.

Names that Naomi and her husband are considering right now:

And here’s the list of family names that they’re not inclined to use, but might appreciate a name that nods to one of these.  (Naomi mentioned the way Daisy and Margaret are connected, and of course Cordelia/Carole are linked only by sharing letters and sounds.)

Their last name is three-syllables, and starts with an S. While they love longer names, they also prefer to have nickname options.

The middle name will likely be Eve, or possibly Lydia or Mary.

Okay, so where does this leave us?

Names From the Shortlist

There are some great possibilities on your list already.

Names Inspired By Your Family Tree 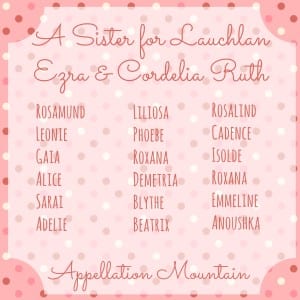 This is a fun challenge!

Gosh, I feel like I’ve made it harder for you to choose, not easier! Let’s say this – from your original list, I love the idea of Rosamund Eve and Leonie Eve. And from my suggestions, the ones that most stand out are Adelie Eve, Isabeau Eve, and Demetria Eve.

Update: She’s here! And her name is gorgeous – Alba Rosamund Eve. Alba was inspired by this post, which ran a few days before the Name Help column. What a lovely, lovely name – congratulations to Naomi and her family, and thanks to all who offered their kind thoughts.