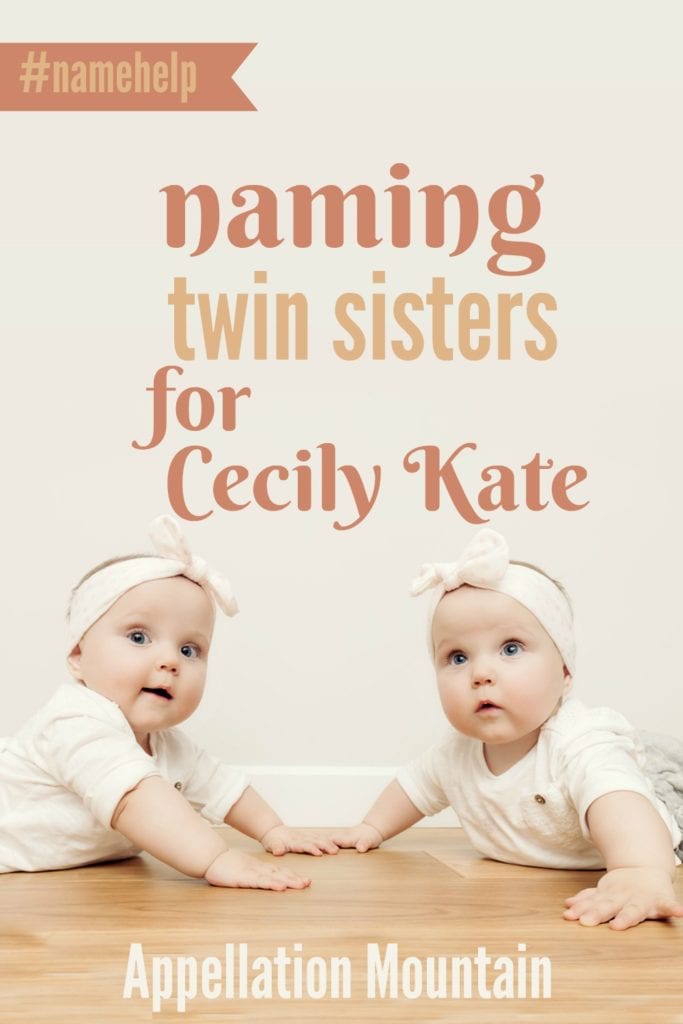 They’re here! Welcome Maisie Marin and Georgia James! Kara writes that Georgia was almost Hattie, but they decided three names ending in the y/ie sound was a little too matched for them … but now they call Georgia Georgie most of the time!

We have a daughter named Cecily Kate, and she has twin sisters coming this fall.

I feel like we’ve read every baby name list on the internet, but nothing seems to stick!

We like less common names that still feel timeless, and it’s a bonus if they have a strong meaning behind them (we tend to lean towards water, nature, or light).

At the top of our list right now are Laurel, Marin, Lux, Iris, Hannah, Georgia, and Evangeline, but we also like Portia, Harriet, Emilia, and Maisie.

I’d love for one of the girls to have my dad’s middle name, James, but if it doesn’t pan out, that’s okay, too.

I think if the twins were b/g instead of g/g, it’d be easier. Everything on our list just feels like a singleton name.

Our last name starts with P, and has a double L in it, so we’re trying to avoid singsong names like Ella/Stella.

Thanks in advance for any help you can give!

I have three pieces of advice, all of which sound like they conflict, but I promise they work together. All of these might apply to naming siblings in general, but twin names tend to be said together more frequently. Plus, issues of fairness and individuality may come up more often.

The lovely C in DC – a twin mom herself – said it best. Twin names need to have equal “weight.” Both have a family name (or deeply meaningful name), or neither does. Both have a similar number of syllables, or both have a formal name with nickname, or … you get the idea. There’s no right way to do it, but it’s important to find balance.

So that’s the first principle. The second piece of advice comes from Swistle, also a twin mom: name your twins as if you’re naming your next two children. In other words, don’t get too hung up on finding names with a clever hook, or even two names that share the same initial. If it happens naturally, great! But no pressure.

And yet, I think that advice depends on whether you’re a cohesive namer in the first place. I’ve worked with twin parents who had two older children; they chose to stick with a very similar style for their twins. It helped narrow the decision process. But I’ve also talked with plenty of twin parents with older children who didn’t have an obvious style established, so it can present a challenge.

Now, to the names.

Your list is packed with great possibilities, and yet, some of them don’t pair as well with Cecily. Cecily strikes me as somewhere between traditional and romantic. It’s very different in style than Lux. Or Marin.

Lux and Marin might make great middles, though, especially if the other sister has the family names James.

That leaves Laurel, Iris, Hannah, Georgia, Evangeline, Portia, Harriet, Emilia, and Maisie. They’re all promising, but I’m not sure I could choose two from that list.

Let’s look for more names like the middle set.

Adelaide – Like Evangeline, it’s long and lovely. It also hits the familiar, but not too common, mark.

Emmeline – This strikes me as a promising Emilia-Evangeline.

Eliza – If you like Emilia, I wonder if you’d consider Eliza? It has the same traditional, but romantic feel as Cecily.

Genevieve – Evangeline reminds me of Genevieve, but I think they’re slightly too close to use as twin names. Or maybe not?

Hattie – Hattie started out as a nickname for Harriet, but it often stands on its own today. (In fact, Hattie ranks in the US Top 1000, while Harriet remains off the list.)

Helena – Harriet, Hannah, and Emilia together make me think of Helena. It’s a pitch perfect sister name for Cecily, and I like Helena James quite a bit. One drawback: people pronounce Helena at least three different ways.

Vera – Vera shares some of Evangeline’s sounds, but is a little bit on the shorter side, like Iris.

Okay, time to mix and match.

Eliza and Evangeline – Both sound like sisters for Cecily; they’re linked by the shared first letter, but still sound distinct.

Iris and Georgia – They’re almost two noun names, and yet both have such long histories of use that it doesn’t seem obvious at first. Visually, Georgia looks much longer than Iris – but sound-wise, they’re both just two syllables.

I like pretty much all of these combinations. My favorites are Eliza James and Evangeline Lux, with Hattie James and Maisie Lux coming in at a close second.

But this is one of these moments when it’s great to have a community of name enthusiasts available, because I know I haven’t exhausted all of the options.

Readers, what would you name twin sisters for Cecily Kate?