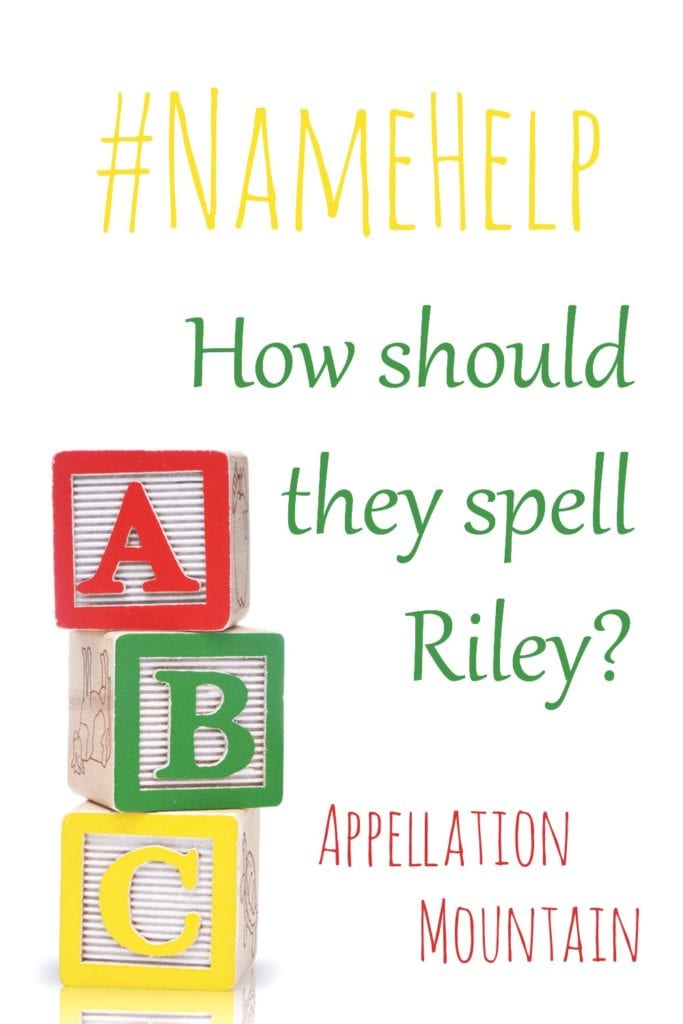 Name Help is a series at Appellation Mountain. Most Saturdays – or the occasional Monday! – one reader’s name questions will be discussed.

I’m a 41 year old newlywed, due with our first baby next month. (And, oh, hi, we just moved across the country, too.) We have the car seat and the crib, but I feel like choosing a name is getting forgotten.

There is one name we agree on. It’s my mom’s maiden name, and it just so happens to be a name found (a few more generations back) on my husband’s side, too. Perfect, right?

Nope! My mom’s name is spelled Reily. Pronounced like Riley. But not Riley. The name on my husband’s side is O’Reilly.

I’m 99.99% certain that this is going to be our one and only child. (But hey, sort of thought I’d missed out on the whole motherhood thing, so who knows?) We’re not finding out the sex in advance, and I’d rather choose one name that works no matter what.

So do we spell it Reily? Reilly? Riley? O’Reilly is out, right? I saw Rylie on Pinterest, and I want to hate it, but I don’t.

We’re giving the baby both of our last names, which is probably why I like Rylie – it sort of makes it obvious which name actually is the kid’s name, right?

Please read on for my response, and share your helpful suggestions in the comments!

Here are all of the positives: first, you agree! The number of parents who still disagree on the child’s name after the baby is born … well, it’s a big number.

Second, the name you agree on works well for a son or a daughter, so you’re set either way.

If you use Reily, one of two things will happen:

The experience with O’Reilly would probably be similar. Except databases can be merciless. How do you feel about seeing your child’s name written Oreilly on official forms? (For the record, I don’t think the limitations of databases justify ditching our favorite names. But it sounds like O’Reilly isn’t your favorite to begin with.)

The possible spellings currently or recently ranked in the US Top 1000 are as follows:

Riley has some serious momentum for girls recently – with exactly that spelling. Credit Disney Pixar’s smash hit Inside Out, as well as Girl Meets World. (Spoiler alert: Cory and Topanga tied the knot, and now daughter Riley is the center of the show.)

That doesn’t make it unwearable for a boy – on the contrary, it’s been in such steady use for so many years, that it’s just plain ordinary to meet a boy called Riley, too.

It sounds like you’re craving clarity and simplicity at this super-hectic time in your life. The simplest, most obvious option is Riley. Why?

Let’s look at the three surname names question. I do sometimes see birth announcements for Hudson Bailey Hayes and think “Hmmm … law firm or baby name?” But it is very, very common nowadays, and no one in your child’s generation will bat an eyelash at such a name.

That said, there’s no reason you couldn’t add a second middle name – provided the thought of choosing one doesn’t send this whole process back to square one! Riley Smith Jones is absolutely fine, but if you wanted to add an extra middle name – Riley Elizabeth Smith Jones, Riley William Smith Jones – I think that works nicely, too. Still, I’m not sure that’s your style at all – but it’s worth a thought if you’re really bothered by the string-of-last-names.

So I’m leaning strongly towards Riley MiddleName LastName, given your circumstances, but I’m wondering if others agree, so let’s have a poll.

Update: Congratulations to Melissa on the birth of Riley Matthew! She writes “We were pretty set on Rylie Elizabeth for a girl, but thought a boy would be just Riley. But then, when we met our son, we thought he needed a middle name, too. Matthew just came to us. Thanks for all the help!”