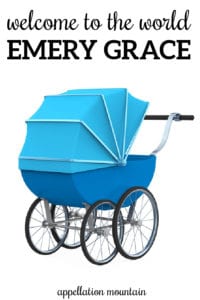 UPDATE: Welcome to the world, Emery Grace. Rachel writes: Reading that it was really okay to keep going with our “theme” made me realize that Emery was truly my favorite name. Thanks for all the encouragement!

We have Larkin Louise, 6, and our twin boys, Hunter Andrew, and Parker William, almost 3. We’re expecting another daughter in September, and we like last names as first names.

But if we name four kids with last names, does it sound like a law firm? A friend of mine said something about another friends’ kids’ names sounding like it belonged on letterhead, and then hurried to say, “Oh, but I like your kids’ names.”

I Googled law firms and found names like Baker McKenzie and Sidley Austin, which, okay, yes, I really like Baker for a boy and Sidley for a girl!

Now I’m wondering if we should we try to find more of a name-name?

Our current list is Marlowe, Emery, and maybe Collins. Wondering if I should add something traditional and name-y, or if you have any other suggestions. But names like Emma and Sophie don’t sound right with our kids’ names, either, do they?!

Now, time for a confession.

The law firm thing? I’ve probably said something like that.

I mean … that’s the way professional services firms get their names – law and accounting practices, especially, but consultants, engineers, heck, even Baskin Robbins! List the founding partners’ surnames, and there you go.

So Larkin, Hunter, and Parker? Yeah. I can see it on letterhead.

But I can also see it on any family tree. Because surnames-as-firsts has become perfectly mainstream. At least a quarter of the current boys’ Top 100 and maybe a dozen of the girls’ Top 100 all qualify as surname names.

It’s also good to note that the line between surname and given name has always been blurry. And, as time goes by, we re-categorize things. For example, Ryan started out as more of a surname name. (Hello, Jack Ryan.)

So I wouldn’t worry about changing your style. Unless, of course, you happen to fall in love with a name that doesn’t fit.

Right now, both of your favorites do fall into the same category as Larkin.

Between Marlowe and Emery, I might rule out Marlowe. It’s a great name, and I adore it with Larkin. Except there’s a strong AR sound in Larkin, Parker, and Marlowe, which feels a lot of repetition.

Let’s look for some more options in the key of Emery and Collins.

Briony isn’t a surname – or, at least, I’ve seldom heard it as one. It’s a nature name, borrowed from a climbing vine. It’s bigger in the UK than the US. Saoirse Ronan’s first big breakout role was in 2007’s Atonement, playing a character named Briony. So it is very possible to find names that sound like surnames … but aren’t really.

Back to the more conventional suggestions! Campbell is relatively rare as a given name, but it’s seen a little bit of use for girls and boys in the US in recent years. The -bell ending makes it especially wearable as a girl’s name.

Delaney peaked a few years ago, but it’s held steadily popular since then. I think it’s a good example of an on-trend name that isn’t really rising or falling in use. Like your older kids’ names, it’s instantly familiar. But the sound is just different enough that it stands out, too.

We love Emma names. And choices like Madison and Addison have been big for our daughters, too. Put the two trends together, and Emerson feels like an obvious choice for a daughter. If Emery’s not quite right, maybe Emerson is?

If Collins is close-but-not-quite, would Hollis appeal?

Quinn is one of those names that feels more like a first than a last these days, simply because it’s become pretty common since the 1990s. I think it has potential, but maybe Quinlan sounds more like a sister for Larkin?

Larkin sounds like a surname, but also like a nature name – even though it has nothing to do with birds. Waverly, too, straddles the categories, thanks to the beachy first syllable “wave” in a conventional surname.

If you love Marlowe, but agree that the repeating ‘ar’ sound isn’t ideal, Winslow might substitute.

Overall, I’m most drawn to Hollis and Waverly. They both sound a little bit like nature names – holly and waves – so that echoes Larkin’s name.

But has anything really topped Emery? I’m not convinced.

And I’m still in love with Marlowe, too, though I think Emery sounds a little better when the names are said together.

So I’ll say Emery is my top choice from your list, and I love Hollis for you, too. But let’s turn it over, because I know we’ll get some great suggestions from the audience.

Readers, what would you name a sister for Larkin, Hunter, and Parker?