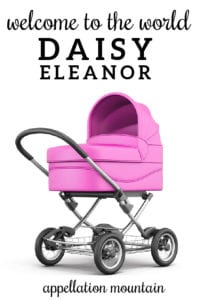 UPDATE: Gina reports that they stuck to their guns and named their daughter Daisy … and none of the grandparents have said anything about her name since. Don’t you just love a #namehelp happy ending?

My husband and I are “those” people – we got married right after we met, and yes, we’re already pregnant. I wouldn’t have it any other way, but it means I don’t really know his family. (We live in the same town as my parents and older brother, but his parents/grandparents live on the other side of the country.)

Our daughter is due in June, a few days before our first anniversary. We have a great name picked out: Daisy Eleanor. (Or maybe Elinor? I’m a big Jane Austen fan.)

A few days after the call, my husband’s mom asked if we were really set on the name. She grew up on a farm, and they named lots of animals Daisy, including a cow. (Maybe more than one cow? I’m not sure I have the story straight.) But it was pretty clear that she was trying to ask nicely if we knew that her first grandchild was going to have a cow name.

I tried to laugh it off, but now I’m wondering: is this a problem?

Congratulations on your new daughter.

And I’m sorry your attempt to spread joy has led to worry!

Daisy Eleanor/Elinor is a great name. I don’t think you should change it – at all.

Imagine your decision after twenty years of marriage.

Most couples name their children early in their relationships. It’s just the nature of life, right? And you’re about as new to this as it gets!

One of the trickiest parts of a new marriage is navigating our relationships with our families of origin. Yup, even when they’re terrific people who only want the best for us. And even when we’re doing our best to be kind and thoughtful – which surely describes your reasons for sharing your daughter’s name early.

As time goes by, it’s much easier to shrug off differences in our preferences and styles. You and your husband will find your groove, and will eventually feel like your own family, with traditions and practices that mix both of your backgrounds and build on your shared experiences to come.

Since you’re in it for the long haul – all of you! – that means that a dispute today is almost certainly forgotten well before Daisy graduates from high school.

Recognize that negative reactions from our families can be a good sign.

I certainly don’t mean to imply that we should behave like rebellious teenagers.

Names are subject to considerations of style. And style changes across generations – in clothing, in household furniture, in music.

But somehow we believe that there are “normal” names and “weird” names, overlooking the obvious: Gladys and Eugene, Tammy and Keith, Dustin and Heather were all chart-toppers not that long ago. And now they’re … well, not.

Every now and then, a grandparent-to-be will dismiss a name because of a fictional character on a short-lived television series. Or an athlete that hasn’t played the sport in three decades.

Google tells me that your husband’s family is correct. Lots of cows were named Daisy over the years, including a few that probably qualify as bovine famous. But it’s been in the US Top 200 for girls since the 1990s. (I’ve called it a Sweet Spot name – not too popular, not too out-there.)

That means that we’ve all met girls named Daisy – or wouldn’t be surprised to meet a girl called Daisy. It falls solidly in the “human name” category these days.

The dividing line has blurred.

Even though I consider Daisy a perfectly reasonable name for a child, it’s worth noting that lots of human names are big for pets. In fact, pet names are people names – and vice versa – in a way that feels very different than a few decades back.

We’ve known cats and dogs called Jake, Sadie, Max, Gwen, Elle, Rosie, and yes, even Daisy. My daughter shares her name with SO many cats called Cleo/Clio. I’ve shared my name with a horse.

And so the correction reaction to such a coincidence in 2020? That’s a great name! Whether the bearer in question goes by four legs or two.

I think you know your daughter’s name. Daisy feels summery and light, but Eleanor is a rock solid, traditional middle name to anchor it.

And for what it’s worth, I think you should spell it Elinor. While unusual spellings can be a headache, it’s far less of an issue with middle names. And Elinor Dashwood is a great character to inspire your daughter.

Okay readers – over to you! What advice would you give to Gina and her husband? 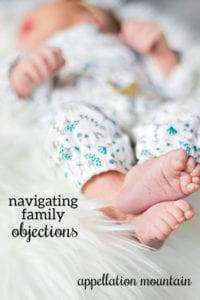 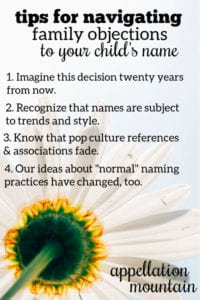