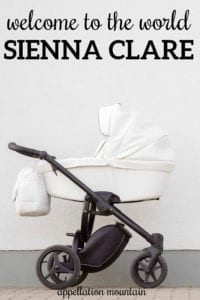 Kara writes: we narrowed it down to Gianna, Arianna, and Sienna. He really wanted Gianna, but I had my heart set on Sienna. When we saw her, it just fit.

After two sons, we’re thrilled to have a little girl on the way in March!

Our boys are Matteo Henry and Luca William. Yes, my husband is Italian. I am part-Italian, too, but my husband was the one who really wanted Italian names for our boys. (I liked them, too – but I’d say I liked the names, more than the connection to our roots, if that makes sense.)

Our last name is very common and super Italian. It sounds like Ross-with-a-y.

Because our last name is common, it’s easy find people who share our boys’ first and last names. That’s okay – as long as it’s not someone very famous/infamous.

For girls, my husband keeps suggesting outrageous names – Bianca, Ludovica, Benedetta. They’re pretty, but I think they’re just too, too much.

Can you and your readers help us find some names that are Italian, but maybe not THAT Italian?

You know, it often feels like we’ve narrowed our lists when we say “Italian names.” But it really doesn’t help that much, right? Because within that broad category, we still have to decide: traditional or modern? Popular or rare?

With foreign names, we have added layers of complexity: can we find a name that’s easy to spell and pronounce in English? Will it seem too imported for our American kids?

I can imagine how easy it is to feel stuck!

Let’s look back at Matteo and Luca for some insights. No question these are Italian boy names, with Italian spellings. But they’re also pretty common in the US – and I wouldn’t be surprised to hear parents whose roots aren’t in Milan or Naples or Rome declare they chose the names because they just liked them.

Looking at the Italian popularity lists, plenty of familiar names appear – but they won’t seem especially Italian. Alice, Emma, Greta … I don’t imagine them as sisters for Matteo and Luca.

Instead, let’s talk about:

Anna – Okay, Anna isn’t any more obviously Italian than Alice or Emma. But I wonder if it would appeal to you both? It’s at-home in Palermo or Pittsburgh, a classic girl name that’s rarer than you might expect in the US. In Italy, it hovers just beyond the Top Ten.

Antonia – Or maybe Antonia? Anthony is the go-to Italian boy name of an earlier generation, but literary Antonia feels far more current. Another thought: the elaborate, but lovely, Antonella.

Francesca – Benedetta and Ludovica would be pretty unusual here. But Francesca is a long-time Top 500 girls’ name. It’s never been wildly popular, but I wouldn’t be surprised to hear it, either. And it sounds exactly right with your Matteo and Luca.

Gemma – Emma doesn’t feel especially Italian. But Gemma? I’d say it does. The poet Dante’s wife was Gemma, way back in the late thirteenth century. It translates to jewel, but in an age with girls named Ruby and Pearl, that feels like a bonus.

Gia, Gianna, Giovanna – Giovanna is the feminine form of John in Italian. It’s shortened to Gianna and also Gia. Any of them have potential as a given name, though I suppose Gia feels less specifically Italian.

Maddalena – I see you’re not big on Benedetta, but I wonder if an elaborate, Italian twist on a more familiar name would appeal more? Maddalena is the Italian form of Madeline. They both reduce to Maddie, a name that’s been well-used in the last twenty years or so. And yet, it could be just different enough to make it fresh and accessible at the same time.

Siena, Sienna – I’m not sure if you’d find girls named Siena or Sienna in Italy today. Siena is a place name, known for the distinctive red-brown color of clay found there. Sienna, the name of the color, has become quite popular for girls in the US, nevermind the Toyota mini van by the same name. I think it feels Italian, which might be more important.

Silvia – This is the Italian spelling of Sylvia, an ancient name that goes all the way back to the founding of Rome. (Rhea Silvia was mom to the founders, Romulus and Remus.) I’m not sure it’s very current right now, though Sylvie – the French form – is a favorite with Appellation Mountain readers.

Veronica – This name was common in Italy long before it became known in the English-speaking world. And yet I’m not sure if it feels like a heritage choice?

Viviana – Viviana, on the other hand, has all of the vibrant sounds of Italian names like Matteo and Luca. Like your sons’ names, it’s related to a cluster of very current choices. And while it might get mixed up with Vivian if you shorten it to Vivi or Viv, I think that flexibility could be part of the name’s strength.

Overall, I like Francesca, Viviana, and maybe Antonella best for Italian girl names. But I wonder if you’d prefer something a little less dramatic, like Gemma or even Siena/Sienna?

Readers, what would you suggest as an Italian girl’s name to go with brothers Matteo and Luca? 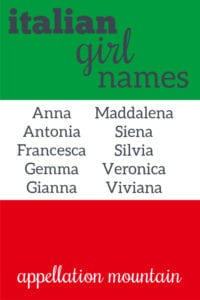