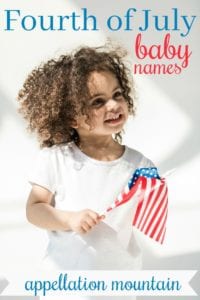 Fourth of July baby names can be subtle or direct, modern or storied. These are my ten favorites of the moment, but I’m pretty sure this list changes every Independence Day!

With Hamilton still sweeping the nation, I’d almost put Alexander in this spot. After all, George is the king we rebelled against – and the most famous George of our time is heir to that very same throne. And yet, this name still stands tall as our very first president. While he wasn’t perfect, Washington remains widely admired for his leadership, intelligence, and humility. His name speaks to the possibility of the American experience – and the perils along the way. If classic boy names are your style, George feels like the obvious choice for a baby born on Independence Day.

Legendary first lady Eleanor Roosevelt makes this name plenty patriotic. But there’s so much more to it! After all, Eleanor of Aquitaine was queen of France and then England, wealthy and powerful in her own right before her marriages. Other women in the medieval era answered to Eleanor, too. It’s the influential Mrs. Roosevelt who puts it on this list, known for her tireless work on social issues, and commitment to human rights. That makes Eleanor an understated patriotic pick.

We all know that Betsy Ross stitched the first US flag, commissioned in secret by George Washington in 1776. A year later, the fledgling nation adopted it as the official design. Ross’ full name was Elizabeth, but we never call her that today. And Betsy actually ranked as an independent given name most years into the 1990s. (Fellow Elizabeth nickname Betty made it all the way to the Top Ten in the 1920s, 30s, and 40s!) Today, Betsy feels vintage, a little bit cutesy, and undeniably Americana.

Plenty of cities factored into colonial America. Independence Hall stands in Philadelphia; New York City was already growing; and familiar places like Charleston, Savannah, Baltimore, and Providence were established early days, too. But somehow Boston feels especially tied to the early nation. Credit the tea-tossing rebels, maybe, or all the history that unfolded in the city over the years. I think that makes it a fitting choice for a child born on the Fourth of July.

Presidential surnames are popular, though we know that not every Carter or Reagan is named for the political figure. Lincoln, though, towers over many holders of the office, known for successfully navigating the Civil War. It stands out among Americana boy names as both mainstream, and clearly tied to the nation’s history. Plenty of places are named in his honor, including cities in Nebraska and Massachusetts, too. And nickname Link is all sorts of video game-inspired cool.

A celebrity baby name – the youngest son of Brad Pitt and Angelina Jolie, twin to Vivienne – Knox benefits from that stylish ‘x’ ending, shared with his older brothers. But Knox is also notable as a US army base in Kentucky, which just happens to hold the national gold reserves. The idea of a building full of gold has captured the imagination over the years, but the idea of Knox and treasure also adds a certain meaningful layer to the given name. And it certainly makes it a subtle patriotic choice, too.

Perhaps because his tragic death is much more recent, Kennedy feels like a presidential name in a way that Taylor or Monroe does not. But Kennedy owes much of its success to similar-sounding girls’ names. First came Kimberly, then Courtney, and eventually – inevitably, perhaps – Kennedy. A handful of pop culture figures titled this into wider use, too.

If presidential surnames are fairly familiar, the Founding Fathers have never quite caught on. There’s Franklin, of course. But how about Revere, as in Paul, he of the midnight ride? We all the basics: the silversmith was part of a network designed to alert the troops if the British attacked. Longfellow immortalized his ride across the Massachusetts countryside to rouse the militia. The surname almost certainly comes from the French word for river, but it’s also another word for respect. It all makes this a promising, and nicely patriotic, name for a son.

As in red, white, and … Of course, a baby named Blue today might make some wonder if you’re Beyonce fans. Or big into the Jurassic World franchise. (It’s the name of a velociraptor who figures in several key plot lines.) While the color symbolizes many things, one of them is the United States flag, which makes it a good fit for this list, especially if he has a sister called Scarlett or Ruby. Okay, maybe not …

Liberty fits in nicely with so many stylish word names of the moment: Trinity, Serenity, Melody. But it’s one of the best Fourth of July baby names, too. There’s the Liberty Bell, symbol of American independence. Patrick Henry’s “Give me liberty, or give me death” speech moved the young nation to rebellion. And the Statue of Liberty greeted countless newcomers to our country. (Including at least one set of my great-grandparents.) So while freedom isn’t exclusive to Americans, this word seems especially tied up with our national identity.

What would you name a baby born on Independence Day? Oh, and just for fun: find your Colonial name below! 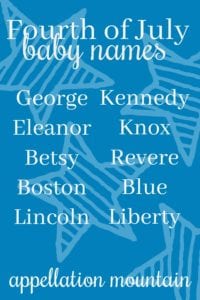 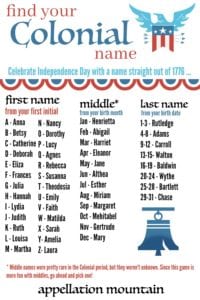