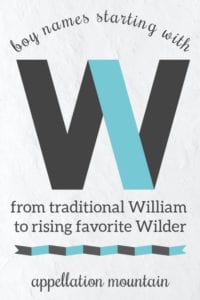 Ask for baby boy names starting with W, and many people will reply William. It’s a venerable classic, worn by many distinguished figures over countless centuries. Billy is everybody’s little brother, or maybe the rebellious 80s rocker Billy Idol. In more recent generations, William is far more likely to shorten to Will.

Other Wil- names abound, though none rivals regal and storied William.

But W boy names also include many new favorites. Think W names almost no one was using until the last twenty years or so.

A surprising number fall somewhere in between. The history books give us Wyatt Earp and Winston Churchill. Once they felt like the only Wyatt or Winston … but that’s no longer true.

Speaking of surnames, plenty of boy names starting with W fall into this category. But there are other W choices for our sons, too, overlooked gems that might be very handsome on a child born today.

It’s the sixteenth most popular initial for boys born in the US during the year 2021.

If you’re willing to head to the end of the alphabet, W boy names offer something for everyone.

From William the Conqueror to the current Prince William, we’ve associated this name with kings for centuries. Shakespeare was a William; so are actors, comedians, musicians, multiple US presidents, and too many athletes and public figures to count. Factor in middle names, and William is everywhere. There’s also sweet William, a pretty flowering plant popular for gardens. That’s the beauty of a rock solid classic name – it’s anything and everything, impossible to pigeon-hole.

For ages, Wyatt appeared on the fringes of the US Top 1000. There was really only one Wyatt: sheriff Wyatt Earp, a lawman and marshal in the Old West. But in the 1950s, television embraced the Western, and as depictions of Earp increased, the name’s use rose. It entered the US Top 100 in 2004, and has remained a favorite with parents ever since.

Waylon brings to mind country music legend Jennings. He was originally called Wayland, but his mother changed the spelling when he was still a child, to avoid confusion with a Baptist college by the name. As the musician’s career took off, so did the name. It’s more popular than ever now, nearly two decades after the musician’s death.

Wesley’s something of a shapeshifter. It’s buttoned-up and serious, as in Methodist theologian John Wesley. But Wes is also creative and cool – think Wes Anderson. And Westley, with a t? Well, he’s the romantic hero of The Princess Bride. The name has teetered on the edge of popularity since the 1980s, dipping in and out of the Top 100, but never quite catching fire.

Back in the day, processing wool required walking on it – hence, the occupational surname Walker. It’s fairly common, putting the W in George W. Bush. It climbed in use following the debut of 1993 television series Walker, Texas Ranger, featuring Chuck Norris as a former Marine turned lawman. Most recently, singer Walker Hayes scored a smash hit with “Fancy Like” and boosted his stylish name even more. Walker could be a banker or a NASCAR driver, a preppy hellraiser name that’s nicely versatile.

Walter has been around. A Germanic name brought to England by the Normans, Walter has been worn by plenty of notables. Think Cronkite and Disney. It ranked in the US Top 100 into the 1970s, but faded towards the end of the twentieth century. It’s edged up slightly in the last five years, suggesting we might be ready to revive this storied name.

Another English surname turned given name, Wade is a bit like Warren. It’s not traditional, but neither does it feel trendy. It did rise in the middle of the twentieth century, along with brief boy names like Scott and Todd. But today, Wade benefits from a certain nature name/active verb vibe … and, of course, superhero Deadpool.

Originally an English surname, we’ve been thinking of Warren as a first for ages. It peaked in the 1920s, when Warren G. Harding was elected president. Since then, it’s been used in a low-key way, a name that feels traditional, if not quite classic. Warren is a solid citizen.

A fast-rising favorite, Wilder feels outdoorsy and capable. It’s among the cool boy names defining names for this generation.

Forever wedded to legendary statesman Winston Churchill, this name succeeds for other reasons. The first syllable – win – is compelling. Though it actually comes from the Old English wynn – joy. It sounds polished, but accessible.

A surname name connected to plenty of notables – think author HG Wells or pioneering journalist Ida B. But Wells also picks up on two things: first, our love of -s ending boy names. And, just as importantly, Wells mixes a certain nature name vibe with the image of well-being.

This surname means son of Walter (via nickname Wat), and Watson has been around for ages. The most famous bearer is John Watson, medical doctor turned companion and chronicler of Sherlock Holmes. The fictional duo debuted in 1887, but Sir Arthur Conan Doyle’s characters have been re-invented for every generation.

Another spelling for popular Weston, possibly inspired by the hotel chain.

A surname meaning Will’s son, and an alternate way to get to Will, while avoiding mega-popular William.

A Princess Bride-inspired take on Wesley, with extra credit to Weston.

If it works for Batman …

Probably a spin on Weston, dropping the T.

Because boys can be just Max and just Jack and just Gus … just Wes works, too.

Thirteenth century Scottish hero William Wallace pushed his surname into use for boys. His story has been re-told over the centuries, most recently in 1995’s Braveheart. As the name has caught on, it’s transitioned from heroic surname pick to more of a traditional favorite for boys. After years out of the rankings, Wallace returned to the US Top 1000 in 2018.

Wilder, with the volume turned up to eleven.

A surname name meaning wooded valley, Walden can also serve as something of a literary and environmental choice. That’s thanks to Henry David Thoreau’s Walden; or, Life in the Woods. First published in 1854, the writer and philosopher’s message has resonated with every generation since.

The first of Martin Handford’s Where’s Wally books debuted in the UK in the late 1980s. When they came to the US, we asked Where’s Waldo instead. The world traveler, hidden in crowd scenes, remains widely known. But as a given name, Waldo is seldom spotted.

A surname name derived from Walter, Walton feels a little more modern than the original. But it also has a gentle quality, maybe because of the lingering romance of 1970s television series The Waltons. (Among other things, the show deserves credit for launching Olivia.)

This name was once a mainstream favorite. In fact, the dad on Leave It to Beaver was Ward Cleaver. It’s a cousin to Warden, and shares the meaning – guard – but has since faded in use.

It means guardian, but we tend to associate Warden with prisons. Perhaps that’s why it went unused for years. Today, the tough guy image has some appeal, possibly thanks to reality television mega-family, the Bates, who have appeared on an Up TV reality show for nine seasons and counting.

Elle Woods followed her boyfriend Warner to Harvard Law in Legally Blonde. He turns out to be unworthy, but the surname still has potential. It’s an English take on the German Werner, but Warner sounds scrubbed up and preppy, a name at home in Nantucket Reds.

The surname name might bring to mind actor Warwick Davis. It’s a distinctive sound that’s both masculine and polished.

Weaver fits with occupational surname names like Carter and Hunter, but Weaver also feels like a subtle virtue name. To weave is to craft and connect, an appealing image for a child’s name. (Incidentally, Webb, Webber, and Webster are all related to Weaver, too.)

An elaborate surname name with easy nickname Wells. It’s also a place name (think New Zealand) and an aristocratic English one, thanks to the Duke of Wellington. (He defeated Napoleon at the Battle of Waterloo.)

Also spelled Wendel, this name was a staple in the US Top 1000 right into the early 1990s.

It’s just plain fun to say Wheeler, a surname once given to those who made wheels. While it sounds unlikely as a given name, it’s not more of a stretch than Walker.

A longer surname name, Whitaker fits with picks like Sullivan. The meaning is “white field,” but the first syllable makes us think of wit and wisdom. The spelling Whittaker is also in use. Since Whitney leans a little more feminine now, Whitaker feels like a potential update.

Fun fact: Wilbur means “wild boar,” but we think of Wilbur as the gentle pig at the center of Charlotte’s Web. Or maybe the hapless owner of talking horse Mister Ed. Either can explain why the name fell out of use by the early 1980s. But before that, Wilbur was a very different name – a Top 100 pick in the 1910s, the name of one of the Wright Brothers. Could it reclaim that style again?

British parents are embracing Wilfred, an Anglo-Saxon name that nearly died out until a revival in the 1800s, along with names like Alfred and Edwin.

Another -s ender with a distinctive sound, Wilkes comes from William, or any of the many Wil names.

Another William spin-off, this time made famous by nineteenth century playwright Wilkie Collins.

Another English surname, and cousin to William, Willard was popular in the 1910s. It’s also the given name of Hollywood A-lister Willard Carroll Smith Jr., better known as Will Smith.

The Dutch form of William, made familiar by actor Willem Dafoe. It’s instantly recognizable and yet fits with unique boy names, too.

Depending on your age, Willis might forever be Arnold’s big brother on Different Strokes. But as that memory fades, Willis is simply an English surname name derived from William, out of favor in the US since the 1980s. But if Ellis is rising in use, why not Willis?

Another surname name that could shorten to Will.

A place name and surname, Winchester might bring to mind the firearms company. Or maybe it makes you think of the historic city in Virginia … or the original, in England, first settled by the Romans.

Winslow Homer makes this name artistic. The o-ending lends it a vibrant, upbeat appeal. And Winslow, Arizona, immortalized in an Eagles song, adds another layer of interest.

Yes, it’s used for girls in big numbers. But Winter feels every bit as fitting for a boy, a nature name in the key of River.

With the added ‘e’ Wolfe seems like more of a surname. Wolf puts it in the company of Fox and Bear. And that’s it exactly: Wolfe is slightly more conventional than some modern animal names, but still quite daring.

The hero of Disney-Pixar’s Toy Story franchise, voiced by the beloved Tom Hanks, Woody might be short for Woodrow, Woodson, Woods, or maybe Elwood, Linwood, or other -wood name. Woody Harrelson makes it more of a tough guy name.

If you’re into baseball-inspired baby names, then this is the perfect for Chicago Cubs’ fans.

Andrew Wyeth became one of the best-known painters of twentieth century America, the son of famous illustrator NC Wyeth. It’s a name that feels creative and unexpected.

Along with Wiley, Wylie probably started out as a surname derived from William. Today it leans a little Wile E. Coyote. But in an age of Riley and Wesley, Wylie seems very wearable.

Would you consider any boy names starting with W for a son? What are your favorites? 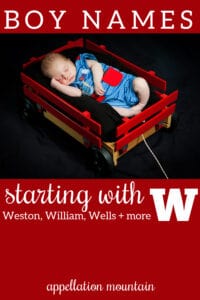 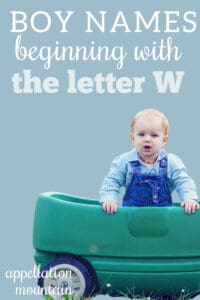