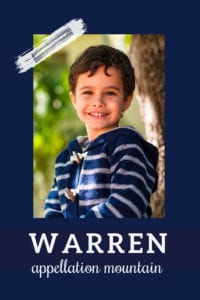 The baby name Warren feels traditional, but not quite classic. And it could be prime for revival, too.

Thanks to Photoquilty for suggesting our Baby Name of the Day, and to Sarah for requesting an update.

The baby name Warren conjures up a host of solid citizens.

It’s a given name and surname at home in the history books. Not William or James, but somehow tough to tie to a particular era.

The baby name Warren charts in the US Top 1000 every single year.

Of course, it peaked at #24 in 1921. Odds are the Warrens you know will be well past driving age, and possibly post-retirement.

That’s still a ways from the Top 100, but it’s also far from obscure.

So where does the baby name Warren originate?

It may be a French place name whispered down the alley from La Varrene to Warren. After all. plenty of Norman names transformed in English. La Varenne is the name of two tiny towns in France; it probably originally referred to the type of soil in the original settlement. (Varennes is even more common on the map in France and beyond.)

Or possibly it comes from an occupational name. The Old French warenne meant game park – an enclosed space for breeding animals. It may have derived from the Gaulish word varros – fence post – or the Germanic element war – to protect. There’s even an Germanic name, Warin, in use by the 1100s.

Eventually, rabbits became the most common animals bred in warrens, and so a warren is also used to describe close living quarters. (Apparently bunnies don’t need much by way of elbow room.)

In any case, we’ve been using the baby name Warren as a first – and last – for generations.

Warren Gamaliel Harding won the presidency in 1921, so it is tempting to group this name with Carter, Kennedy, and Reagan. Except … if you know your American History 101, Harding is linked to the Teapot Dome scandal.

His election helped boost the already-popular name to its peak. But he might be the reason the name fell, too.

Other associations with the baby name Warren include:

Financial guru and noted philanthropist Warren Buffet. He remains a widely-respected figure, known as the Oracle of Omaha. (As in Nebraska. Omaha is his hometown.)

Hollywood leading man Warren Beatty. The actor lends the name some glam. After all, Beatty has been nominated for four Best Actor Oscars … and that’s just a start.

Rapper Warren G. scored a smash hit in 1994 with “Regulate.” And honestly? Warren G. might be the more familiar Warren to parents today. Born Warren Griffin III, the rapper helps make the case that this name will endure.

The first version of this post, published in 2009, described the baby name Warren as midway between “Walter and Calvin.” That still sounds about right.

Neither trendy nor out-of-step, familiar as a surname and a first, the baby name Warren is completely unexpected and instantly familiar – all at the same time.

What do you think of the baby name Warren? 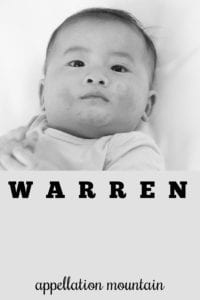