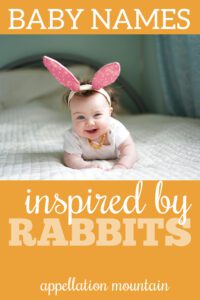 Looking for an Easter-themed name for a new baby?  Have you been craving Cadbury eggs since the pregnancy test came back positive?

Okay, it’s a little – or maybe a lot silly – to think about narrowing your possible name list down to famous rabbit names.

But believe it or not, it isn’t a bad list.  They’re zippy, retro, daring, even classic.  You could safely name triplets from the list and no one would guess that you were inspired by the furry little creatures.

It probably helps that I’ve left Bugs, plus Flopsy, Mopsy, and Cottontail off the list, but famous rabbit names are often pretty recognizable.

On the plus side, they symbolize lots of positive things – fertility, yes, but good fortune, too.

Read on for some of the best names worn by bunnies over the years.

Basil – Basil Stag Hare is a character from Brian Jacques’ Redwall series.  This makes him a warrior bunny, despite the scholarly name.

Benjamin – That other bunny from the mind of Beatrix Potter, Benjamin is quite well known.  There’s also a minor Sesame Street character known as Benny Bunny.

Baxter – Arthur the Aardvark has a BFF named Buster Baxter.  He’s a bunny.  Let’s hear it for alliteration!  I wouldn’t suggest Buster as a given name, but Baxter feels like a jazzy possibility.

Dylan – I’ve never seen The Magic Roundabout, but I understand that it is a children’s classic in much of the English-speaking world, originally produced in the 1960s.  Dylan is their guitar-playing bunny, named after none other than Bob Dylan.

Edward – Have you read The Miraculous Journey of Edward Tulane?  It’s a charming tale of love and growth and change and serendipity.  And it makes me love the name Edward, nevermind the sparkly vampires and all of those British kings.

Frank – He’s part of the plot of Donnie Darko – a creepy bunny in a cult classic.

Harvey – He’s the bookend to Donnie Darko’s Frank.  The Jimmy Stewart movie Harvey was a playful tale of the reclusive Elwood P. Dowd and his invisible rabbit friend.  All ends happily.

Hazel, Holly, Dandelion, Silver, Bluebell – There are great names for girls borrowed from bunnies, too.  This quartet all come from Watership Down – and they’re all bucks – boys – in the book.

Luna, Io – The Japanese anime Jewelpet hasn’t reached the US, but it just might.  Luna and Io are two rabbit characters from the series.

March – Would this work?  I was inspired to add March to the list thanks to Alice in Wonderland’s March Hare.  He’s mad, of course, ranging from a daffy delirium in the 1951 animated classic to an eccentric cook in Tim Burton’s 2010 reboot.  Looking for something more subtle?  The March Hare’s given name is Thackery.

Max and Ruby – Here’s one that you’ll probably recognize if you have small children.  Rosemary Wells’ popular children’s books have become an animated television series called Max and Ruby.  It’s a Nick Jr. staple.  Other bunnies making appearances on the show answer to Louise, Martha, Valerie, and Morris.

Oswald – Before there was Mickey Mouse, Walt Disney created this rabbit.  Oswald was a smash in the 1920s and lived on in comic books into the 1950s, along with his adopted sons Floyd and Lloyd.  Today, Disney is reviving the original version of the rabbit, making him famous once more.

Peter – He’s the granddad of all famous rabbit names.  From Peter Rabbit to Peter Cottontail, this name screams long floppy ears.  Except that Peter is an unassailable classic, too – a rock, literally.

Reese – Where is there a bunny by this name?  In the candy aisle, of course.  Have you spotted the Reester Bunny?  If you’re a chocolate and peanut butter fan, you probably already know that not only does Reese’s make peanut butter eggs, they also make peanut butter-filled bunnies, which puts Reese on the famous rabbit names list.  Sort of.

Roger – The animated rabbit at the heart of Who Framed Roger Rabbit? wears a noble name, with roots in Norman England.

Romarin – Do you know The Bellflower Bunnies?  It’s another animated series, originally produced in Montreal as La Famille Passiflore.  In French, the rabbits are Romarin, Pirouette, Agaric, Mistoulef, Dentdelion, Onesime, and Zinnia.  In English, they’re Poppy, Violette, Periwinkle, Mistletoe, Dandelion, Bramble, and Zinnia.  Romarin strikes me as the most interesting of the bunch, but many of these have potential.

What’s your favorite Famous Rabbit name?  Are there others that should be on this list?  And is Roger ready for a comeback, or is he still stuck in dad name limbo? 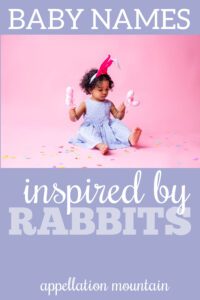