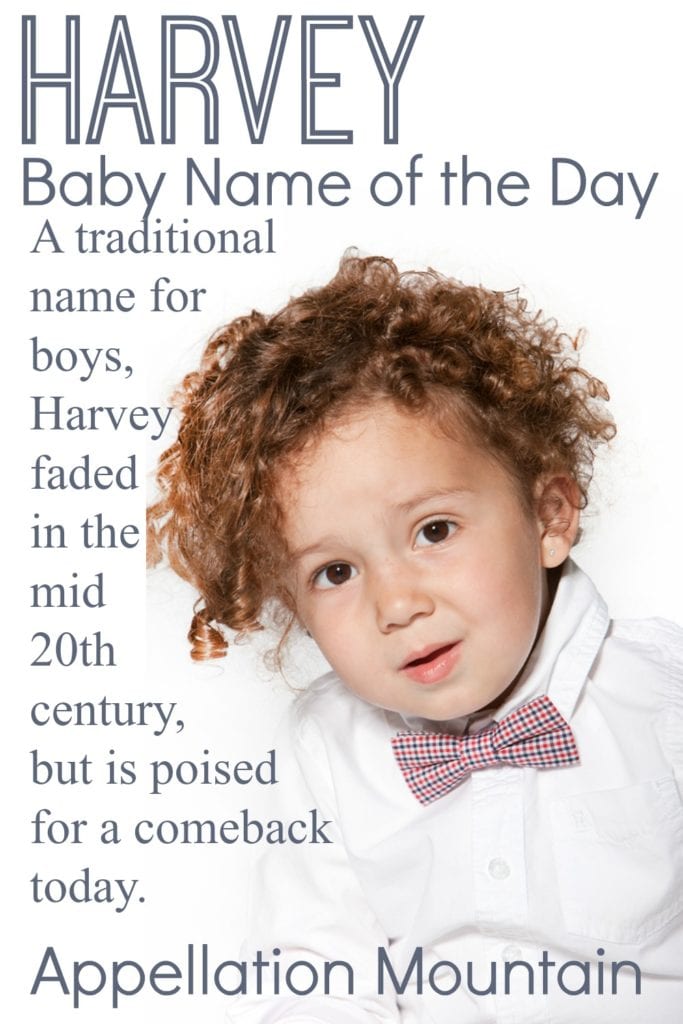 Originally from Breton – a Celtic language spoken in the Brittany region of France – Haerviu comes from the words haer – battle – and viu – worthy.

The first famous bearer of the name lived his days as a hermit. Legend tells us that the future Saint Harvey was blind, but able to talk to animals. He’s depicted telling frogs to hush up or using a wolf to plow the fields. The sixth century monk is also known as Hervé, the French form of the name.

Normans brought the name to England, but it faded in use for centuries. By the 1800s, it had made a comeback, along with other once-forgotten choices like Ethel and Alfred.

In the US, the name appeared in the Top 100 from 1880 through the 1930s. Plenty of famous bearers can be found in the history books and pop culture, including:

It’s also a common surname, usually derived from the same source as the given name.

In 1944, Mary Chase penned a play by the name. Her story told of an invisible rabbit, seen only by an ordinary guy named Elwood P. Dowd. Jimmy Stewart played Elwood in the 1950 movie adaptation. The movie is considered a classic, and plenty of other movies, books, and shows refer to the rabbit.

In 1977, Harvey Milk became the first openly gay man to hold public office in the US, as a member of the San Francisco Board of Supervisors. A former colleague assassinated him in 1978. Sean Penn played the politician in 2008 biopic Milk, bringing greater attention to his legacy.

Then came Suits. The legal drama debuted in 2011 on USA. Gabriel Macht plays Specter, a winning attorney with all the charm and good looks to match.

While not quite a role model, Specter’s character inspires – handsome, intelligent, and principled, even if flawed.

Harvey: On the Rise

Harvey returned to the UK Top 100 in the late 1990s. It seems like Ryan in the US – familiar, steadily used, if not especially stylish.

In the US, the name’s return to favor begins around the same time Suits debuted. In 2010, parents gave the name to 186 boys. By 2013, that number more than doubled to just over 400. And last year? Nearly 700 newborn boys answered to Harvey, returning the name to the US 500.

Harvey Beaks, a Nickelodeon animated series, also signals the name’s rise. Beaks is a good-hearted young bird enjoying all sorts of adventures in his forest home. A generation of future parents is growing up with the name.

Factor in the letter V, and this name sounds like a future favorite.

Crushed that Henry is so popular? Consider this storied, vintage name instead.