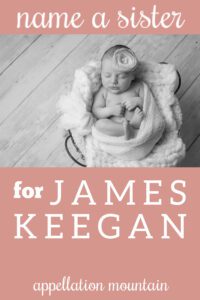 Our son was born at 32 weeks, before we’d settled on a name. He’s doing great now, but our worry heavily influenced the name we chose – James Keegan, my (late) dad’s name and my husband’s (late) grandmother’s maiden name. I know it sounds kind of woo-woo, but we feel like they were his guardian angels.

He’s James, not Jimmy or Jim, though sometimes we do call him Jamie and BabyJay at home. But everyone else calls him James. I like that the name is strong and traditional and doesn’t sound like the hero of a romance novel, but I do sometimes wish it were a little more exciting.

Now we’re expecting a daughter, and we have decided a few things:

But that is all that we’ve decided. We have a very long list of names that sound like they would be okay, but they’re mostly names of friends/family kids and so would be weird to use: Violet, Maren, Georgia, Ivy, Eloise, Belle.

It’s like we just can’t think of anything that we could actually use!

I hear you. In order to use a name we have to hear it. And sometimes, until we hear it in use by an actual child in real life, a name doesn’t feel like a possibility. It’s old-fashioned or too different or just not really sure.

So it’s natural that you’re having thoughts that go like this: “Oh, the neighbors just named their baby Ivy. I love that name!”

Except, of course, you probably won’t use the same name as the family next door. So you’re forever back at square one.

I’m going to suggest some names that share the qualities that seem most important to you:

Let’s see if any of these work!

A SISTER FOR JAMES KEEGAN

She went chasing rabbits in Lewis Carroll’s enduring story. But the name has been worn by world-changing women, too, like nineteenth century activist Alice Paul.

Crisp and tailored, Claire qualifies as a classic. But it’s not quite in the same category as Katherine and Mary, so perhaps it strikes the right note for James’ sister.

A traditional – and powerful! – word name, Hope combines a strong sound and a rich meaning.

Margaret is too classic and too nickname-rich for you, I’m sure. But how ’bout Margot? It’s been around for ages, but it feels fresh and modern, too.

Top 50 favorite Nora is very popular, indeed. And sure, Cora and Flora and Aurora share much of the same sound. But Nora feels nicely distinctive, a strong name with history galore.

Classic Theodore has become a fast-rising favorite for our boys. The high-energy Thea is Theo’s feminine counterpart, a sparky name that straddles the traditional and the modern.

Tailored Vivian comes from the Latin word for alive. If you love Violet and Ivy, Vivian might be the perfect choice.

The first name I thought of was Ada, and it’s still my top choice for James Keegan’s sister. Ada Caroline, maybe? Or Ada Vivian?

Readers, what would you name a sister for James Keegan?