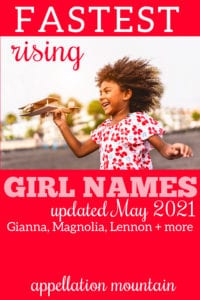 Every year, we talk about the fastest rising girl names. But we usually mean the names that gained the most in terms of rank. Which name leapt from #755 to #373? (It’s Haisley. More about that name later in this post.)

Make no mistake, it’s fascinating to look at names new to the Top Ten or 100. And, of course, the Top 1000 generates tons of buzz, too.

But this list is about something slightly different – and every bit as significant.

These are the fastest rising girl names in terms of actual births. And that might be an even better measure of which names are truly white hot right now.

The list ranges from trendy inventions to classics on their way back to the top, with absolutely everything in between.

Hawaiian and Hawaiian-flavored -lani ending names have been a big trendlet in recent years. Kailani is part of the club.

Another -lani name, Milani owes something to Melanie’s recent revival, too.

Another spin on fast-rising favorite Alaia.

With Nova near the top of this list, Novah follows right along.

Most Lily names have fallen slightly in recent years, but Lilith climbed. In a year that saw Mazikeen enter the US Top 1000, that’s probably down to the character’s appearance on Netflix series Lucifer.

It’s the year of the -lani names, no doubt.

A lovely, romantic-sounding name, Delilah was boosted by a hit pop single in 2006. The success of so many Lyla and Layla names helps, too.

A surname name, Kinsley follows Kennedy and similar choices up the popularity list.

A name with multiple origins and meanings, Ayla succeeds Kayla and picks up on the same sounds as Alaia and other fast-rising names on this list.

Camila continues to post steady gains, the latest English-Spanish crossover is boosted by celebrities like Camila Cabello and Camila Mendes.

After debuting in the US Top 1000 back in 2013, Lennon has continued to gain for girls, a mix of the musical and surname styles.

A lovely floral name, Magnolia is every bit as elaborate as favorites like Amelia, and shares that stylish -lia ending.

A favorite rising quickly with Spanish-speaking parents, Aitana comes from the name of a mountain range.

A name with multiple origins and meanings, Remi has risen like a rocket.

A classic name with plenty of appeal, Natalia is perfect for a daughter born at Christmastime – or any other season.

A sharp and stylish Irish name, with a little boost from Thandiwe Newton’s Westworld character.

A Kailani cousin, popularized by the singer Kehlani.

A synthetic surname, mixing Hailey with Paisley for a name that’s all 2021.

Long an obscure Scottish choice, actor Isla Fisher put this name on parents’ radar. It’s been white hot for years. Could Isla be headed to the Top Ten?

An irresistible modern sound with an equally upbeat meaning: joyful.

A feminine form of John, Gianna soared to the top of this list following the tragic death of Gianna Bryant and her dad, Kobe. 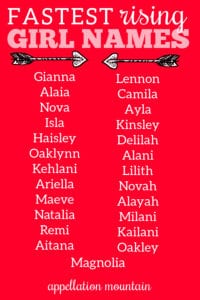