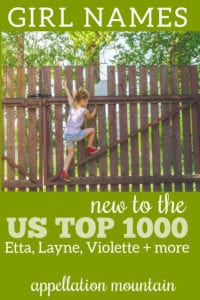 Every year, the US Social Security Administration releases their Top 1000 lists – the most popular names given to newborn girls and boys in the prior calendar year.

And every single time, some names leave the rankings. That opens up space for newcomers.

All sorts of influences push names in – and out – of favor. Style and sound, pop culture, current events. There’s no shortage of mysteries, either, names that bubble up, coming into greater use for reasons that seem elusive.

Some of those names are brand new to the list, never before seen. (Think Wrenley.) Some are back on the charts after a long absence. (A warm welcome back to Loretta.) And some fall somewhere in between, teetering on the edge of the Top 1000 in recent years, either on their way up or out – and it can be tough to tell which is which.

We love Aria and Arya. This is a spelling that might make it less Game of Thrones and more Indian heritage pick.

An Irish import that only takes a little bit of thinking to pronounce correctly – it’s closer to Ashlyn and Ashlynn, names that also appear in the current US Top 1000.

A Spanish language name associated with the Virgin Mary. It means “altar of the sky.”

Goddess of the hunt, Artemis is a name that fits right in with so many mythological favorites, like Calliope and Iris.

A re-spelling of popular tree name and place name Aspen.

From a French surname meaning “beautiful friend,” sci fi series The 100 gave this name to a male character. It feels like an obvious unisex choice, though.

Somewhere between a surname and a Bryn-Leigh smoosh.

An Italian place name, in the headlines thanks to the tragic death of Kobe Bryant. Capri was his youngest daughter with wife Vanessa.

The French feminine form of Dennis, Denise peaked in the 1950s and 60s.

The Spanish language version of Denise, young actor Denisse Peña from Netflix’s Cable Girls might help explain the name’s rise in use.

Traditionally short for Andrew, actor Drew Barrymore made it feel like a viable option for girls. (It’s a family surname for the Barrymores.)  Drew charted in the Top 1000 in the 1990s, as the actor became a household name. But Drew’s return to the Top 1000 might be thanks to another actor, Drew Sidora. The That’s So Raven alum recently joined The Real Housewives of Atlanta.

An alternate spelling for the more popular Giovanna.

A retro mini name, Etta feels like a successor to the powerfully popular Emma.

It means earth in Sanskrit, but it could also be a phonetic take on Isla.

Another phonetic take on Isla, or maybe a modern invention.

Another cousin to Jayden, Kaylin, and company.

A phonetic respelling of Gianna, inspired by the tragic death of Kobe Bryant and daughter Gianna.

A musical name that owes a little to the success of Kaylee and Kaitlyn, too, Kadence had left the Top 1000 after 2018, only to tip back in this time around.

Another Hawaiian -lani name, just like so many trending choices.

A phonetic spelling of fast-rising Leilani.

We love Lane for our sons. Elaine and Lainey rank in the girls’ Top 1000. Now so does Layne.

A Laura name, Loretta peaked in the 1930s and remains famous thanks to legendary country singer Loretta Lynn.

A feminine form of Marcellus – ultimately the source of former favorite Mark – Marceline can bring to mind Adventure Time (she’s a vampire queen), a small Missouri town (home to Walt Disney – and inspiration for Main Street in his parks), or Angelina Jolie’s late mother (though she was Marcheline).

A Spanish contraction of Maria Soledad, it’s teetered on the edge of the rankings for the last several years. Folk etymology lends Marisol some additional appeal: it looks like the phrase mar y sol – sea and sun.

A successor to Madison and Harlow alike, it’s surprisingly Marlowe hasn’t ranked in the Top 1000 all along.

If we can name our daughters Khaleesi, why not Mazikeen? She’s a character on Lucifer, and, like her boss, a demon who trades hell for Los Angeles. The sound is appealing, but the meaning – damagers? Not so much.

It could be a simplified spelling of Melanie, or another -lani name.

This spirited Irish surname debuted in the US Top 1000 for boys and girls alike in 2020. One possible influence? The 2018-19 reboot of television series Murphy Brown.

A beguiling name in the key of Maya, Naya’s return to the rankings likely reflects the tragic 2020 passing of actor and Glee alum Naya Rivera.

Noah is traditionally masculine and Noa, more conventionally feminine. But now Noah appears on the girls’ list, too – about 874 spots higher than on the boys’ side.

Disney’s Raya and the Last Dragon wasn’t released until early 2021, but it had been expected in 2020. The buzz was enough to put this name into the Top 1000.

Another lovely Rose name, with an ending that mirrors chart-toppers like Amelia.

It could be masculine or feminine, Hebrew or Irish. It’s a shapeshifter of a name, all in a single syllable.

A Kardashian baby name, with a little bit of backstory.

A little bit bird-inspired, with a lot of surname style, too.

A Latin American take on the Arabic Jamila, meaning beautiful.

An alternate spelling for the Swahili Zuri – also meaning beautiful.

A Slavic cousin to Zoe.

What are your favorite new girl names 2021? 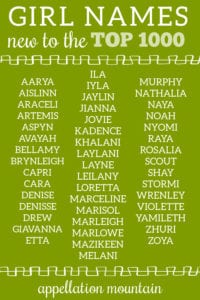