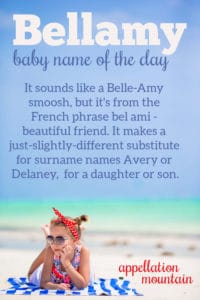 Bellamy recently debuted in the US girls’ Top 1000. Could it be the next Avery, Isabella … or is it a little bit of both?

Our Baby Name of the Day comes from this list, with thanks to Danielle for the original suggestion.

At first glance, this looks like a smoosh name, combining Belle and Amy.

Or it’s a twist on the long-time Top Ten favorite Isabella.

It could also be yet another three-syllable, ends-with-y name, a successor to Avery and Delaney.

Or maybe the name owes its rise in popularity to all three factors. The elements remind us of familiar feminine favorites, we’re wild for -bel names, and the general structure of the name reminds me of countless choices, from Kimberly to Kennedy.

But back to Belle + Amy for a minute, because it turns out this name started out as a surname. A French one, derived from the elements bel – beautiful – and ami – friend.

So that’s all kinds of lovely.

Plenty of people have answered to the surname – and sometimes the surname as a first – over the years, including:

The twenty-first century gave us two notable figures with this name as a first.

We met the Novogratz design family – Robert, Cortney, and their seven kids – on Bravo in 2009. Their reality series, 9 By Design, lasted just a single season. But they remained in the public eye for their eclectic, trend-setting style. That extended to their kids’ names: sons Wolfgang, Breaker, Five, Holleder, and Major, plus daughters Tallulah and Bellamy.

In 2010, the year after the series aired, 48 girls were named Bellamy – nearly triple the prior year.

Actor Bellamy Young – born Amy – started her career around the same time, with roles in CSI: Miami and then the part of First Lady in Scandal.

Like any surname, it’s not fair to assume it’s only meant for the girls.

The 100 debuted on the CW in 2014. Set in a post-apocalyptic future, the young survivors at the heart of the story include (male) Bellamy and his sister Octavia. It’s proved powerfully influential, helping Octavia into the Top 1000, boosting Lincoln, and even making Clarke unisex – at least occasionally.

Likewise, Bellamy gained in use for girls and boys, beginning in 2014. But the groundwork has been laid for parents to perceive this name as feminine. And so it started to appear on more shortlists, somewhere between Everly and Marlowe.

The Next Big Thing

It’s easy to imagine this name appealing to parents who love names as different as Annabelle and Sloane, Maren and Rowan. It offers so much: a powerful meaning, an appealing sound, the right mix of tailored, unisex sensibility and a sense that it’s just feminine enough.

Overall, if you’re after a modern name with deep roots, Bellamy is one that can satisfy.

What do you think of Bellamy? Do you like it better for a son or a daughter?

First published on September 20, 2011, this post was revised substantially and republished on July 31, 2019. 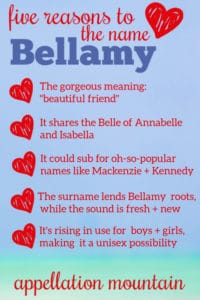