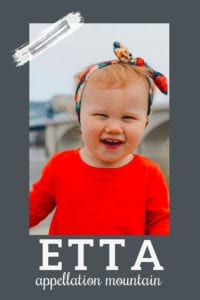 Like Ella, Etta comes from names that include the sound. Henrietta comes to mind, but there’s Rosetta and Benedetta, Marietta and Coretta. The list goes on.

Oh, and one more -etta ending name – Jamesetta. As in Jamesetta Hawkins.

The future singing legend dropped her surname, re-arranged her first and became a legendary singer. A six-time Grammy winner, Etta has been inducted into the Rock and Roll Hall of Fame, Grammy Hall of Fame, and Blues Hall of Fame. She recorded her first studio album in 1960; her last, in 2011. Even if you don’t know her name, you’ve heard her songs.

You might expect that Etta James would inspire parents. Except her fame came late. She didn’t receive widespread acclaim until the 1990s.

Then again, there are lots of reasons the numbers don’t show a rise in the baby name Etta during the twentieth century.

Back in the 1880s when the US rankings first begin, we can see the baby name Etta ranked in the US Top 100.

One infamous Etta from the late nineteenth century was Etta Place, part of Butch Cassidy’s Wild Bunch as the companion of Harry Longabaugh, the Sundance Kid. They robbed trains – lots of them – between 1899 and 1901. While Etta never took part in their heists, it seems she was part of their inner circle. Her real name is unclear, but some speculate it might’ve been Ethel, which fits with the time period and Etta as a nickname. Etta Place often appears in various movies and such about the outlaws.

The name fell in use steadily right through the 1960s. Even if Etta James had been a break-out star from her first recording, the name might’ve been a little dated.

By the 90s, the baby name Etta was given to only two dozen or fewer girls most years.

The twenty-first century has been the age of names like Emma and Ella – brief and complete. Rooted in history, but also with a minimalist aesthetic that feels right at home, these timeless choices have been go-tos for parents in recent decades.

It seems like the baby name Etta would fit right in, and it almost does.

Except Americans tend to say our Ts like Ds. Etta sounds something like Edda, and classic Edward isn’t particularly stylish right now. So Gemma followed Emma, but Etta remained stuck in limbo.

There’s no guarantee of what will happen next, of course. It’s clear that the baby name Etta appeals to plenty of parents as a retro mini name, one that’s just different enough.

If you’re after something that’s simple and straightforward, vintage but not too frilly, and still under-the-radar, Etta could belong on your list.

What do you think of the baby name Etta? 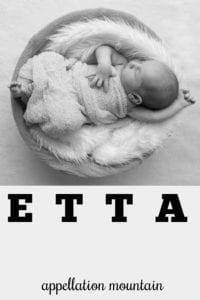