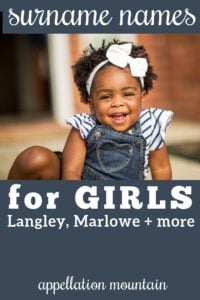 Surname names for girls have gone from sometimes-heard family custom to one of the biggest categories of baby names today.

Not every surname makes the list. We tend to favor English, Irish, and Scottish choices – regardless of our own heritage. Kowalski just doesn’t feel like a first name, even though Madison and Harper do.

Despite those limitations, the possibilities abound. And because we’re grown accustomed to hearing last names in the first spot, there’s plenty of room for innovation.

If surname names for girls are your style, but you’re looking for something a little less common, start with this list.

Beckett and Barrett are favorites for our sons, but Abbott shortens to Abby – which might make it one of those surname names for girls.

An English place name with a buttoned-up vibe.

Borrowed from actor Jennifer, who spells it with a single N, the name works because of easy nickname Annie.

A recent arrival to the US Top 1000, Bellamy combines a great meaning: beautiful friend – with that Bell sound we love.

Here’s proof that surname names for girls aren’t brand new: Blair has ranked in the US Top 1000 for girls since we met Blair Warner on The Facts of Life. Parents today, though, probably think of the original Gossip Girl’s Blair Waldorf. And for Disney fans, it’s all about legendary designer Mary Blair.

Cady sounds almost exactly like Katherine nickname Katie. But many will recognize it as the name of suffragette and reformer Elizabeth Cady Stanton – or of Lindsay Lohan’s character in Mean Girls.

Journalist Campbell Brown raised her name as a possibility for girls, a mix of Camila and Isabella with surname style.

Borrowed from the daughter in real life book-turned-movie The Blind Side, Collins also brings to mind actor Lily Collins.

Delaney reigns as the most popular of D surname names for girls. But how about Delancey? It’s a New York City street name, close, but with a softening ‘c’ sound.

An English take on a French surname, Destry was the sheriff in a famous American western. But it feels like a surname take on Destiny, and therefore just feminine enough.

If Chanel works, why not Dior?

Fictional detective Ellery Queen might make this name masculine. Except it feels like an Ella-Avery smoosh. Plus, Eleri is an unrelated name from Welsh legend.

It sounds a little like nature name Ember, but Embry evolved from either Emery or place name Emborough.

No matter the spelling, Fraser’s potential comes from two factors. First, we love -r ending names. Second, since the actual meaning is unknown, I tend to think of the French word for strawberry – fraise.

It means son of Gilbert, but the Gibson Girl epitomized feminine style in the late nineteenth and early twentieth centuries.

As colors go, Gray is gentler than bold Scarlett. It almost feels like a modern take on Jane or Claire, a tailored name that’s just feminine enough.

A Scottish form of Gregory, Greer Garson starred in Hollywood films in the 1940s. It’s felt feminine ever since.

Fashion house Halston defined the 1970s, but feels ahead of the curve in the 2020s.

The surname of Academy Award-winning actor Olivia de Havilland, it feels like a surname update to names like Evelyn.

As in Laura Ingalls Wilder, the hero of the enduring Little House series.

The spelling is open for debate; it’s Eisele in German, the version Lady Antebellum’s Hillary Scott chose for her daughter. But Isley looks a little sleeker, and it’s the version used by Rock and Roll Hall of Famers The Isley Brothers. All of the names seem to come from the Germanic element isan – iron.

One of the reasons James feels workable for a daughter is that it isn’t just a classic given name. It’s been used as a surname for generations, too.

Jameson ranks in the boys’ Top 100. Does the spelling Jamison work for a daughter? It looks so close to Allison and Madison, and Jamie has been used for girls since at least the 1890s.

From the surname of the artist, Frida Kahlo.

As in the fashionable London neighborhood and home to Kensington Palace, home to many members of the British royal family.

As in retired figure skating star Nancy Kerrigan, and another Irish surname with a built-in feminine nickname.

An attractive sound, Langley is forever associated with the Virginia city where the CIA is headquartered. That lends Langley a little

In French, laine means wool, so this probably started out as an occupational surname. That flourish of an -ier ending that feels right for a daughter. Plus, it leads to nickname Laney/Lainey.

Tree name Linden might have hewed too close to Lyndon B. Johnson in decades past. But as that association fades, Linden feels more like the nature name that it is – or else, an update for Baby Boomer favorite Linda.

Yes, it’s quite close to Madison. But the tragic story of Elvira Madigan, and the Mozart piano concerto that now bears her name, lends it something different.

It feels masculine – but then again, it shortens to traditional girl nickname Maggie.

An alternative to Harlow, one that benefits from midcentury girl name Marlo.

Originally a surname for a cheerful person, Meriwether brings to mind at least two distinct images. First, explorer Meriwether Lewis, of the Lewis and Clark Expedition, crossed the American west. Many decades later, Merrywether appears in Disney’s Sleeping Beauty as one of Princess Aurora’s godmothers.

Nealey comes with a few meanings, including “son of the poet.” It almost sounds like a feminine form of Neil.

A bird name in the key of Wren, Nightingale also brings to mind world-changing nurse Florence Nightingale, making it a hero name.

Ogilvie doesn’t sound quite like a given name. But with Everly and Avery so popular, I think Ogilvie might work. It started out as a surname meaning “high place.”

Palmer means pilgrim, a reference to the palm fronds medieval travelers brought home from the Holy Lands. It layers meaning on to a modern-sounding choice.

While it doesn’t come from pax, the Latin word for peace, this Old English name benefits from the association.

It sounds like Quinn-with-an-s, but Quince is a pear-shaped fruit … or a surname for someone who grew or sold them.

A Spanish name meaning country house, Quintana could be an elaboration of Quinn – but that might be a good thing.

It sounds like Eve-with-an-R, or Reese-with-a-v. An occupational surname for a steward or bailiff, you might think of writer Reeve Lindbergh, daughter of Charles and Anne Lindbergh.

Sigourney Weaver played the fearless Ellen Ripley in the Alien movies, adding her character’s surname to our list of strong surname names for girls.

From Saint Clair, Sinclair feels just on the right side of feminine.

While Sullivan is popular for boys, shorten Sullivan to Liv and it works for a daughter, too.

If Nate is masculine and Kate feminine, then Tate is … probably both. But it’s more popular for boys at the moment.

An obscure form of Taylor, Thayer might wear well in our age of Thea.

Valletta sounds long and lovely, but it is a surname, not a first name in the key of Isabella. It comes from the capital city of Malta, named after Jean de Valette – which traces its meaning back to the word valley, too, just like Vale.

The twice-married American socialite’s romance with the future King Edward VIII scandalized a nation – and caused a crisis for the monarchy. It also put her unusual family name on the list of surname names for girls.

An update to former favorite Whitney.

Inspired by actor Kate, with vintage nickname Winnie as a bonus.

A middle name shared by two of Matt Damon’s daughters, Zavala is a Basque place name. It’s unconventional, but it sounds feminine.

Are there any surname names for girls our your list? 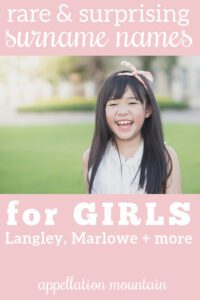 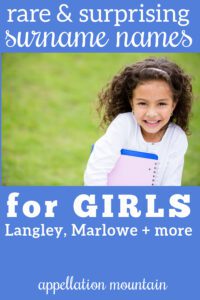