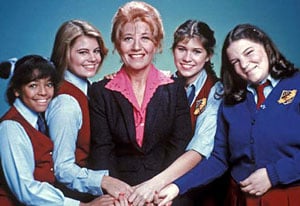 We’ve been talking 1980s names all week!  Last year, we wrapped up our timewarp series by looking at Girls’ Names from 1980s Movies.

This year, let’s turn to the small screen.

Television was different during the Reagan years: fewer channels.  A better chance that a struggling series might have a season or two to find its way.  A gentler sense of what was acceptable to show – and say – during prime time.  Married … with Children and Roseanne would challenge those assumptions by the decade’s end, but much of the 80s were a laugh-track sanitized safe zone, meaning that even elementary-school aged kids watched prime time in the pre-Disney Channel era.

Plus, no DVRs.  We had a VCR, but I don’t think anyone in my family ever mastered programming that puppy.  Most of the time, it was live television or nothing.

The upshot?  Today’s generation of parents came of age on these television shows, both as they aired for the first time, and later as re-runs on local stations.  But did the character names influence the names we would later choose for our children?

Alexis –  Before Dynasty debuted in 1981, Alexis had a long history of use for women – and longer still for men.  Alexandra, Alexandria were also leaping up the girls’ Top 1000 in the 80s, as were Alex and Alexander for boys.  But Alexis led the pack in 1981, thanks to Joan Collins’ portrayal of the villainous Dynasty diva.

Blair – The Facts of Life was set at the fictional Eastland School, an exclusive boarding school for the daughters of the well-to-do.  Blair Warner was among the most privileged of the set, a snooty rich girl who matured over the series.  The choice of Blair for Gossip Girl character Blair Waldorf has always felt like a nod towards prime time’s original pampered princess.

Clair – Many of the names on this list belonged to the younger characters, the girls that we wanted for our best friends, the girls with wardrobes to envy.  But Clair was also Mrs. Huxtable.  And while I envied Denise’s bohemian style, Clair was someone I could be when I grew up – great kids, amazing career, that house!

Daisy – Remember The Dukes of Hazzard?  I loved Daisy Duke’s Jeep, and admired her mechanical ability.  Names from Hazzard County have caught on more than you might imagine, and thanks to Jessica Simpson’s turn as Miss Duke in the 2005 big screen reboot, we recognize the character.  But Daisy feels sophisticated, too – credit The Great Gatsby – and also vintage, thanks to Downton Abbey.

Denise – I envied Denise Huxtable’s effortlessly cool style, but her name?  While it was pitch perfect for Cliff and Clair’s daughter, not even the incredibly cool Lisa Bonet could save her character’s name.  Denise fell throughout the show’s run, and continues to do so today.  But she’s the kind of stand-by that will have a comeback – eventually.

Dorothy – I had to do some thinking to remember The Facts of Life’s Tootie’s real name – Dorothy!  Kids have been dancing with Dorothy the Dinosaur on The Wiggles and playing with Elmo’s goldfish Dorothy for years now, and she’s slowly starting to make a comeback.  After decades of decline, Dorothy was up to #808 in 2013.  I think she’s finally left grandma territory.

Ellie – Does this one count as an 80s television name?  Dallas gave us the matriarch Miss Ellie.  If I hesitated to included mom-names like Clair and Kate, how can Ellie make the cut?  Let’s just say this: Ellie was regularly used as a nickname and given name in the early twentieth century, making her just right for television character.  But Ellie has made a major rebound since the 1990s – just as the generation of kids who grew up on Dallas welcomed kiddos of their own.  Ladylike Miss Ellie – born Eleanor -might not be the reason, be she sure doesn’t hurt the name’s appeal.

Fallon – This one has always struck me as overly dramatic, a name that screams complicated plot twists and impossible family dynamics.  And no wonder – Dynasty gave us poor little rich girl Fallon Carrington Colby.  Just like Alexis, Fallon was also catapulted into wider use thanks to the smash hit series.

Jo – The quartet at the heart of Facts included scholarship student Jo Polniaczek, a motorcycle-riding tomboy.  Jo was short for Joanna, but her character always reminded me of Jo March – Josephine – from that other famous feminine quartet Little Women.

Kate – Like Clair, the name of a grown-up, this time from Ricky Schroeder and Jason Bateman’s big break, Silver Spoons.

Kimberly – Kimberly Drummond had it all, even though her two not-quite-brothers were the stars of the show.  Diff’rent Strokes aired from 1978 through 1985, but Kimberly peaked before the first episode.  But here’s what I think is influential about Miss Drummond’s name: first, she rarely answered to a nickname, the forerunner of hundreds of girls named Isabella-not-Bella and Alexandra-not-Lexi.  Second, Kimberly was the flag bearer for three-syllable, ends-in-y or -ie names for her generation – the successor to Dorothy, the forerunner of Emily and Avery.  It’s an enduring style.

Kirby – Another Dynasty name.  Imagine Audrey Hepburn’s elegant and dignified character from Sabrina reinvented for an 80s prime time soap opera, and you have Kirby Anders.  The name had a brief spike in use for girls during the character’s run, but has trended boy over most of its use – and now seems to be ceded to the video game character.

Kit – I’m stretching here.  The car was K.I.T.T., and it stood for Knight Industries Two Thousand.  Plus, K.I.T.T. had a masculine voice – the buddy to Michael Knight in the ultimate 1980s buddy show, Knight Rider.  And yet, this generation of parents sees Kit favorably, a capable Campfire Girl reinvented for 2014, part-retro, part-new.  She’s more conventional than surname names like Sloane, less expected than Kate, and more daring than Katherine-called-Kit.  The talking car didn’t hurt this name.

Krystle – Oh, Krystle!  I’ll give you Crystal, a glittering nature name that owed something to years of Christine/Christina names topping the popularity charts, and something to names like Ruby and Pearl.  And you can’t not love Linda Evans as good-hearted, downright decent Krystle Carrington.  But that spelling!  It briefly popped into the popularity charts during the show’s heyday.  I can defend variant spellings, but this one drips of 80s excess.

Lucy – She was a teenaged bad girl when Dallas debuted in the late 1970s, and while she matured, Miss Ewing continued to endure dramas and disappointments, as befits a prime time soap character.  As a given name, Lucy’s decline stopped around the same time Dallas debuted, though she wouldn’t climb again until around the year 2000.

Mallory – The name has an unfortunate meaning, but Mallory Keaton was an appealing character on 80s sitcom staple Family Ties.  She was stylish and, even though she wasn’t a scholar, held her own against brother Alex P.  Mallory rocketed from obscurity to the US Top 100 during the show’s run.

Maggie – This was a go-to name for capable grown-up women on television sitcoms – think of Mr. Drummond’s new wife on The Facts of Life, and, of course, Growing Pain’s mom Maggie Seever.

Natalie – Could Natalie be among the most influential names from the small screen in the 80s?  Another member of the Kimberly club, Natalie ranked #68 in 1971 and climbed to #51 by 1982.  So … maybe.  But Natalie was already well-established before the world met Eastland School.

Olivia – Later in The Cosby Show’s successful run, Denise Huxtable married and came home with her daughter, Olivia.  The name was already on the rise, but as the show headed out of the 1980s, the name climbed into the Top 100 and continued to rise.

Samantha – When Who’s the Boss? debuted in 1984, Alyssa Milano was the young daughter of Tony Micelli, often called just Sam.  Now she’s a star in her own right, a veteran of small screen favorites like Charmed and Melrose Place.  As a given name, Samantha was already Top 50 when the show debuted, and would rank in the US Top Ten by the series’ end.

Sonny – A million years ago, pre-Big, pre-Castaway, a young Tom Hanks played cross-dressing Kip Wilson in sitcom Bosom Buddies.  Kip and roommate Henry were saving a few bucks by moving into a women’s-only residence in Manhattan, forcing them to dress as women.  Sonny was another – truly female – resident, and Kip had a crush on her – only Sonny knew Kip only as Buffy.  Hilarity ensued.  Years later, Summer has had a good run, and Adam Sandler named his daughter Sunny.

Who were your favorite female 80s television characters?  Which names have I missed?