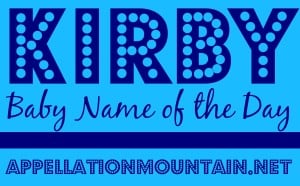 Thanks to Virginia for suggesting Kirby as our Baby Name of the Day.

Kirby is an English spin on Old Norse, a name that stepped off the map.  In Old Norse, kirkja is a church.  The Scottish word kirk traces its roots to the same origin.  The -by ending means settlement, so Kirby was a settlement near a church.

On sound alone, it is easy to imagine Kirby fitting in with Riley and Kylie.

Except that back in 1992, a little pink blob became Nintendo’s least likely video game hero ever.

The blob was originally a placeholder while the character was fully developed.  But Kirby, resident of Dream Land on planet Pop Star, worked best in his rough draft form.  He’s an optimistic, innocent little creature – but oh my, is he fierce.  Kirby can swallow anything and take on its attributes, so that little pink blob can fight like a ninja, or swallow so much air that he floats like a balloon.

His little pink self has appeared on tons of merchandise, and he’s starred in over 20 games since his debut.

The origins of his name are murky.  It was shortlisted at some point, by someone – and may have been influenced by John Kirby, an attorney who defended Nintendo in a 1984 lawsuit.

Even before the video game, Kirby was the name of an anthropomorphic vacuum cleaner in 1987’s Brave Little Toaster.  The movie was based on an earlier novel, and sequels followed.

All of this makes Kirby a good name for a cat, maybe, but how about a kid?

A few other associations to the rescue:

But is Kirby better for a boy or a girl?

Blame the small screen.  Dynasty, that booster of Fallon and Alexis and Krystle, introduced a character called Kirby in 1982, and she endured the usual mix of love affairs gone wrong and devious schemes that awaits any prime time soap opera character.

Maybe it is no surprise that Kirby fell out of the boys’ US Top 1000 back in 1996.  Today the name is out of favor for boys and girls.

But a handful of -by names are rather stylish: Ashby, Crosby, Colby, Jacoby, even Ruby.  So don’t count Kirby out – if you can get past the video game character, there’s lots to like about this one.

Do you think Kirby is wearable today?  Is it better for a boy or a girl?