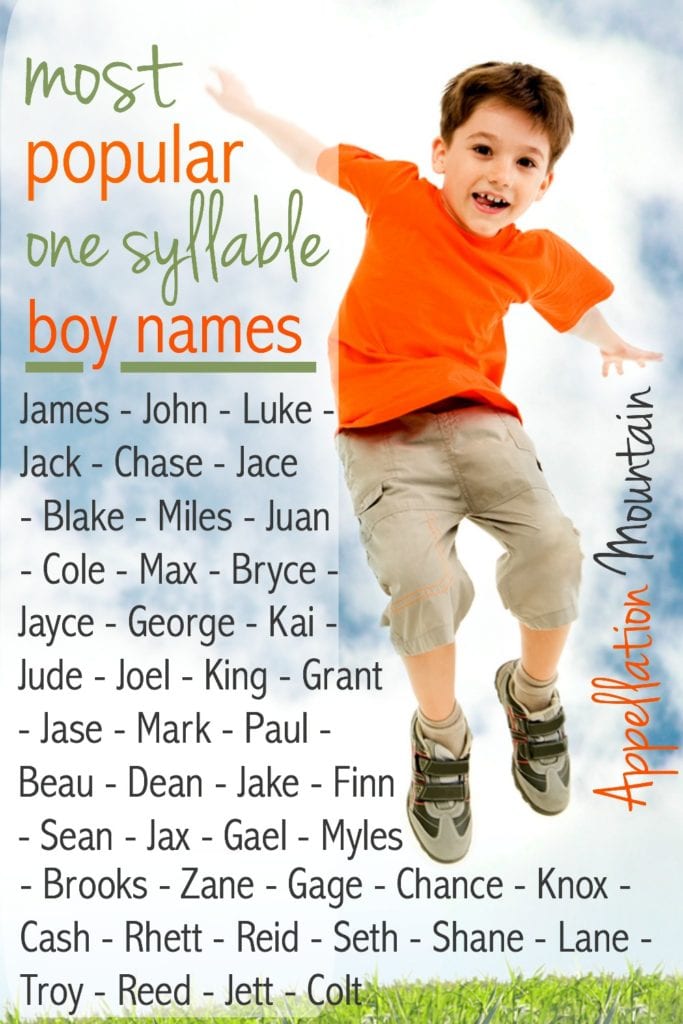 What are the most popular one syllable boy names in the US? The list mixes the truly traditional and the completely modern.

I originally planned to list the Top Ten. Or maybe I would cut the list after 25. But I kept reading until I’d sorted through the entire Top 1000. By the end, I had compiled a list of 138 popular one syllable boy names – much too much for one post!

The first installment follows – look for the next part soon.

#1 James takes the top spot. Classic and evergreen, James never feels out of style. But the name’s continuing status as top dog is good news for parents worried that girls might claim this name. (Ranks #7 in the US.)

#2 John no longer reigns as the go-to name for boys in the US. And yet, the name remains broadly influential and frequently used. (Ranks #26 in the US.)

#3 Luke combines Biblical roots with ties to a serious pop culture hero. It’s an easy choice for a son less expected than John – but only slightly. (Ranks #28 in the US.)

#4 Jack started out as a casual form of John, but has graduated to independent status. A default name for a man of action, Jack brings to mind pirates (Sparrow), government agents (24’s Bauer), and countless others. (Ranks #40 in the US.)

#5 Chase marks the first truly modern name on this list. The name mixes an active, upbeat sound with a prep school vibe. (Ranks #74 in the US.)

#6 Jace rhymes with Chase, but feels more edgy and modern – a sci-fi hero, maybe, or a cowboy at home on the range. Still, Chase and Jace could make the shortlists of the same parents. (Ranks #75 in the US.)

#7 Blake once brought to mind the silver-haired patriarch of Dynasty fame. The name surged in use following the television drama’s 1981 debut. Since then, it’s become a mainstream favorite. (Ranks #96 in the US.)

#8 Miles might be one syllable – or two. I’ve erred on the side of maybe and included it on this list. With ties to Plymouth Colony and jazz, Miles feels nicely Americana. (Ranks #107 in the US.)

#9 Juan stands at the most popular single-syllable Spanish import on this list. Latino language and culture has made a tremendous on baby naming, but Juan predates this phenomenon. It has ranked in the US Top 250 or higher since the year 1900. (Ranks #114 in the US.)

#10 Cole reminds me of Chase. It doesn’t feel crazy creative or completely novel, but the name was almost unheard of before the 1950s. (Ranks #115 in the US.)

#11 Max feels retro and modern at the same time. Add up all the Max names, and it might also seem more popular than rank implies. (Ranks #118 in the US.)

#12 Bryce succeeded names like Brian. But it’s no trendy innovation. Instead, Bryce traces his roots to a fifth-century saint. (Ranks #131 in the US.)

#14 George belongs with the regal names, an association reinforced by young Prince George Alexander Louis. But it’s not too grand for everyday wear – possibly one of the reasons Will and Kate chose the name for their son. (Ranks #136 in the US.)

#15 Kai surprised the naming world. The gentle nature name might be the most popular Hawaiian name ever used in the US – though the name has plenty of other possible origins. (Ranks #145 in the US.)

#16 Jude combines saintly and musical influence, a short name with style and substance. (Ranks #156 in the US.)

#17 Joel splits the difference between super-traditional Joseph and more modern names. It peaked around 1980, but remains in steady use. (Ranks #159 in the US.)

#18 King claims a longer history of use than you might guess. But the top-of-the-heap title currently stands at its most popular ever. (Ranks #163 in the US.)

#19 Grant might be stuck in permanent style limbo. The name never trends completely out of favor – but I’m not sure when it last felt fashionable, either. That might make it a good choice for parents intent on finding names unlikely to feel dated or trendy. (Ranks #177 in the US.)

#21 Mark remains a classic, but like John, no longer feels like a stylish choice for a son. Lengthen it to Marco or Marcus, and maybe … (Ranks #196 in the US.)

#23 Beau literally means handsome, and feels just unexpected enough to appeal to modern parents. That bright ‘o’ sound helps, too. (Ranks #203 in the US.)

#24 Dean makes the list of retro cool names, thanks to James Dean and Dean Martin. Rory’s first love on Gilmore Girls was named Dean; so is one of the Supernatural demon-hunting brothers and one of Harry Potter’s fellow Gryffindors. (Ranks #204 in the US.)

#25 Jake feels much more popular than the rankings imply, because long form Jacob topped the charts for so many years. But just Jake does possess a certain casual cool – think of Molly Ringwald’s Sixteen Candles crush, or hey, Jake Gyllenhaal. (Ranks #205 in the US.)

#26 Finn could be higher. Like Max, formal versions of the name abound. And yet, Finn feels complete, thanks to the figure from Irish legend, as well as plenty of famous Finns, from Glee to Huck. (Ranks #209 in the US.)

#27 Sean almost belongs with modern traditionals. The Irish import spent three decades in the US Top 50, and remains in steady use – even if it is more of a dad name now. (Ranks #211 in the US.)

#28 Jax can be considered yet another heir to long-time chart-topper John, via Jack, Jackson, and Jaxon. But it probably appeals to parents after something completely fresh and new, too. (Ranks #214 in the US.)

#29 Gael might be another not-quite-one-syllable name, but listening to Spanish and French speakers pronounce it, I think it belongs here. The name traces its origins to France, but is rising rapidly in the Spanish-speaking world. (Ranks #220 in the US.)

#30 Myles marks yet another spelling variant. Though since Myles Standish is usually written with the ‘y’ spelling, it’s not as nouveau as Jack/Jax. (Ranks #223 in the US.)

#31 Brooks belongs with one of my favorite categories of boy names: preppy hellraisers. (Ranks #232 in the US.)

#32 Zane once conjured up Old West images, thanks to author Zane Grey. Now it feels pan-global and thoroughly modern. Credit One Direction alum Zayn Malik, but also our affection for the letter Z. (Ranks #233 in the US.)

#33 Gage brings to mind measurements and machines. It’s an all-boy name boosted by a Stephen King character, and fading slightly in recent years. (Ranks #242 in the US.)

#34 Chance can’t be considered a virtue name exactly, but it does fit in with a long list of meaning-rich modern names, like True and Haven, that we’re hearing more and more. (Ranks #250 in the US.)

#35 Knox soared in the rankings after one of the Brangelina twins received the name. It’s an Americana choice for a boy with a cool sound. (Ranks #258 in the US.)

#36 Cash brings to mind singer Johnny and the almighty dollar. It’s a cool name, with plenty of edge. (Ranks #267 in the US.)

#37 Rhett combines romance with brevity. Clark Gable famously played Rhett Butler in Gone With the Wind, and yet this name doesn’t feel too tied to the fictional character. (Ranks #274 in the US.)

#38 Reid combines surname style with a modern sound. The only drawback? Combine this with Reed, and it’s more popular than it seems. (Ranks #277 in the US.)

#39 Seth seems like a grown-up name, thanks to Seth Myers, Seth Godin, and many an accomplished figure. But the name actually peaked around 2002, so could the best Seths be yet to come? (Ranks #278 in the US.)

#41 Lane might feel unisex, but the usage numbers give this one to the boys. Spell it Laine, and the opposite is true. (Ranks #296 in the US.)

#42 Troy claims ancient roots and a long history of use, but feels tied to the an earlier generation, thanks to 1950s and 60s teen heartthrob Troy Donahue. (Ranks #300 in the US.)

#43 Reed follows Reid, not far behind on the list. Combined, the names feel even more popular. (Reed ranks #329 in the US.)

#45 Colt mixes an Old West vibe with a short, modern sound. Colton has become a Top 100 mainstay in recent years, but just Colt remains relatively rare. (Ranks #337 in the US.)