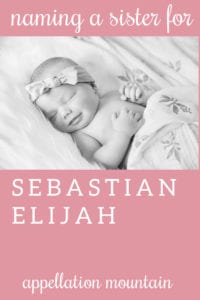 For as long as I can remember, I have loved the longest girl names. When I read that Queen Victoria’s first name was Alexandrina, I thought that’s what I would name my daughter. My best friend growing up was Nicole “Nikki” and I loved the idea of longer names, like Nicolina and Nicoletta. Other names I really liked were Cassandra, Gabriella, and Esmeralda.

We have a son named Sebastian Elijah, and we’re expecting a daughter in December. My partner is pretty indifferent about names, though he’ll sometimes surprise me by disliking a name I really love. (He shot down Elizabella, because he went to school with a mean girl named Eliza.)

The problem is that I feel like all the names I loved for all those years don’t seem like the right choice for my daughter now. Does that even make sense? I still like them, but they’re not her name. My mom keeps suggesting Olivia and Isabella, and while I think they’re pretty, I feel like I hear them a lot.

Congratulations on your new daughter, K!

I think I know exactly what you’re experiencing. If you start dreaming of names in 2005, but aren’t actually naming children until 2015, a lot can happen. Every year that passes increases those changes, so if you made your first “names for my future children” list in fifth grade, well … chances are you’ve heard an awful lot of names between then and now!

Names come in cycles. The most popular choices of 1999 sound they’re from another century in more ways than one.

But the style you’re describing – elaborate girls’ names, rooted in tradition, but with a little bit of a twist? They’re enduring.

It’s just a question of finding some fresh ideas!

Antonia is long, but Antonella turns it up to eleven. It sounds a little bit like Isabella, but is far less popular.

An Italian name meaning order, Cosima is related to another word for the universe – cosmos.

A floral name far more elaborate than Lily or Rose, but just as wearable.

A literary name from Shakespeare, long and elaborate Ophelia follows Olivia up the charts.

Most of your favorites seem to end with a, but mythological Persephone is one long, elaborate girls’ name with a slightly different sound.

Fiery Seraphina might be too close to Sebastian if you’re avoiding an initials repeat. But it’s also a great choice for underused girl names.

Vivian is far more popular, but the Italian Viviana takes this tailored name in a romantic direction.

My favorite for you is Antonella. It sounds like a logical successor to Alexandrina, with the -ella sound you’ve appreciated in Gabriella and Isabella, too.

If not Antonella, maybe Ophelia? Parents sometimes dismiss it because it lacks an easy, obvious nickname. But it sounds like that’s not a drawback for you.

Readers, what would you suggest for Sebastian Elijah’s sister? 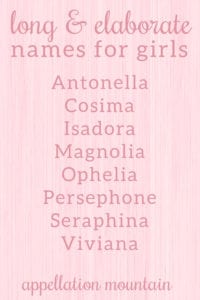