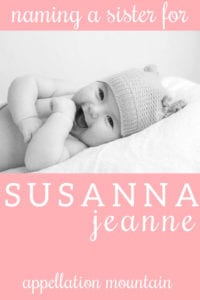 We have a three year old daughter, Susanna Jeanne, and we’re expecting another girl in March.

Our list for Susanna was pretty much Susanna and Penelope, and we went for the less popular choice. I’m so glad we did, because there are two Penelopes in her nursery school class already.

Jeanne is for my dad, Eugene, but I thought Jeanne was prettier than Gene/Jean.

This time, we’re talking about Louisa or Marina, but I feel like they’re not quite right.

My initial reaction is that Louisa and Marina both make great sister names for Susanna. I suppose you could end with up Sue and Lou, which would be way too cute. But … what are the odds that you’ll choose those nicknames?

But the more I thought about it, I wondered if Susanna feels like a summer name, all white sundresses and big, floppy hats. While Louisa and Marina feel like autumn. Maybe – just maybe? – there’s some essential lightness that defines Susanna?

I’m stretching, but I can almost hear why they’re not quite exactly right as sisters for Susanna.

Let’s see if we can come up with some ideas that are romantic and feminine, relatively rare, and have that same summery ease.

A SISTER FOR SUSANNA

Brief and tailored rather than flowing and elaborate, Blythe shares Susanna’s light, bright feeling, possibly because of the name’s meaning – happiness.

Relatively rare, but familiar thanks to actor Calista Flockhart, this name’s meaning also appeals: most beautiful.

Possibly Cordelia fits more with Louisa and Marina, but it’s an equally familiar name that’s seldom heard. Just Delia could be an option, too.

Take Georgia, mix in a healthy dose of Juliette, and this vintage rarity is the result.

Legendary dancer Isadora Duncan might be the most notable bearer of the name.

If Susanna’s name was almost Penelope, then maybe a similar choice would work for her sister? Persephone is the logical alternative. While it does rank in the current US Top 1000 at #924, that’s far from saturated.

Lots of the Rose names might be perfect sisters to Susanna, especially because Susanna means rose. (Or lily. Or possibly event lotus!)

A New Testament name, Tabitha has been used in small numbers for years – but remains relatively uncommon. If you like the idea of sticking with Biblical names, Susanna and Tabitha could be perfect together.

I think Susanna and Calista might be my favorite combination. It’s a good balance of gorgeous names no one is using, but everyone has heard.

Then again, you haven’t mentioned middle names. Is there a family member you plan to honor? Because something like Louisa Blythe could be downright gorgeous, too.

Readers, what would you suggest as a sister name for Susanna Jeanne?