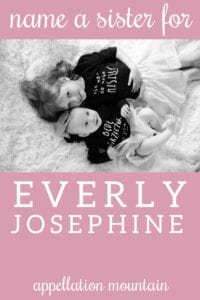 Name Help is a series at Appellation Mountain. Every week, one reader’s name questions will be discussed. We’re relying on thoughtful comments from the community to help expectant parents narrow down their name decisions.  Thank you in advance for sharing your insight!

We love our 4 year old daughter’s name, Everly Josephine. We call her Evie and even EJ and Evie Jo, but those last ones are mostly at home.

I do get kind of sulky, though, because I thought we were choosing something really different. And instead it’s the kind of name that everyone loves, and everyone else is using, too. There are two other baby Everlys in our neighborhood, and people keep mentioning more and more to me.

Because we’re Mike and Amanda, our names feel very ordinary, and I wanted something a little special for our kids.

My husband isn’t as bothered about this. His name suggestions for Everly were Julie/Julia and Sarah. Those are still the names he mentions, but he’s mostly willing to let me choose.

Evie’s middle name comes from my dad and his dad and my brother. (Which is part of the reason we’d never use it as a first name. There’s a good chance I’ll have a nephew Joseph IV someday.) We almost used just Jo, but decided the longer name was what we liked better.

There isn’t really an obvious middle name this time. Mike is a junior, so we talked about Michelle. But I feel like I might’ve chosen Josephine even if it wasn’t a family name, and Michelle would only be for my husband.

Can you help us find something that works with Everly, but maybe isn’t the next Sophia?

It’s so frustrating when that One Perfect Name turns out to be everybody else’s favorite, too! But it can sometimes happen fast. Everly didn’t even rank in the US Top 1000 in 2011. I’m guessing you chose the name around 2016, when it was rising ast – but not yet in the Top 100. Now it’s ranked #43, and lots of different spellings are also catching on. Everleigh ranks #94!

The good news? While this can happen to anyone – and any name – Everly’s skyrocketing popularity is the exception, not the norm. It often takes a decade or more for a name to climb from the 400s to just outside the Top 100. Plenty of names never make it that far!

Penelope comes in at #25. While it’s a great match for Everly, if popularity is bothering you, I’d probably skip it.

Likewise, Eliza sits just beyond the current Top 100. So while I think it would work well, it might be worth looking elsewhere.

I think all four names have potential, particularly Teagan. While Teagan shares many qualities with Everly – they’re both surname names with a unisex vibe, but used primarily for girls – it’s in a different category when it comes to popularity. Teagan reached the US Top 200 in 2016, but it’s plateaued there. In fact, the name fell to #192 in 2020. It’s almost certainly not the next Everly.

If not Teagan, then what?

While I don’t think you have to choose another surname-style name, it sounds like you’re drawn to high-energy choices.

Thoroughly feminine, Annika comes from the classic Ann. At first, that feels about a million miles from Everly, style-wise. But the bouncing, energetic sound of Annika feels like a match.

Georgia is a Top 200 favorite. Georgette doesn’t crack the current Top 1000. But both of them sound like sisters for Everly.

A nature name that mashes up the sounds of vintage June and 70s chart-topper Jennifer.

I’ve seen Delaney suggested as a sister name for Everly, and it feels like an obvious choice. And yet … I wonder if Laine or Lainey might be a better fit?

Just like Everly plays off traditionally feminine Eve, Eva, and Evelyn, Marlowe brings to mind Margot and Marlo. It’s just inside the current Top 1000, making it familiar but uncommon.

Another surname name … and one that repeats the -ley ending. Maybe not ideal? But I do think Presley is a distinctive and memorable surname name, both because of the sound and because, well, Elvis.

While we’re in celebrity surname territory, I’ve always thought that borrowing Kate Winslet’s surname as a first would be brilliant. It’s strong but playful, and nicknames Winnie and Win are fun, too.

A note on Michael-related middles:

Instead of Michelle, would you consider Michaela or Micaela? It’s another traditional feminine form of Michael, and while we’re used to seeing it spelled Makayla/McKayla/Mikaila, maybe hewing closer to Michael makes it more clearly an honor name? Micah might be another possibility.

I’m kind of loving Teagan Micaela, and because I’m wild about alliteration, Marlowe Micaela speaks to me, too.

Readers, what would you suggest to Amanda for Everly Josephine’s sister?