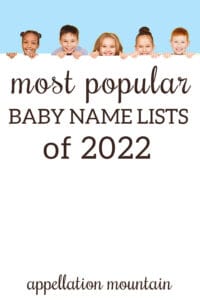 I love a good list of lists, don’t you?

Let’s take a look back at the twelve most popular baby name lists, as judged by page views, during calendar year 2022.

A brand new list this year, these names are lush and creative. They feel a little bit beyond the mainstream, and yet a few of them are Top 100 choices.

Gone are the days of Bob and Dave. This is the Sebastian generation.

Think the distant past was nothing but Mary, John, and Anna? Nothing could be further from the truth. These are the names I would’ve been blogging back in 1885, had I been alive. And, y’know, the internet existed.

Not too common, not too out there. It’s a winning formula, and these boys’ names that hit the spot attract plenty of attention.

Vintage, elegant, timeless Rose names, from the traditional to the completely unexpected.

7. THE GREAT BIG LIST OF BIRD NAMES FOR GIRLS

Birds are the new flowers.

Okay, if it’s not Sebastian’s world, then it belongs to Jack. Or Crew. Possibly Knox.

I get that “spunky” isn’t the best word. And yet, it stands in for a host of positive qualities: sparky, high-energy, determined, casual-cool.

Numbers are having a moment. There’s Broadway musical Six, and I’ve spotted new apartment complexes named Nine, Eight, and – there it is again – The Six. No surprise they feel more accessible as given names, too.

Every generation has its go-to one-syllable middle names. A generation of Lynn and Anne chose Grace and Rose for their daughters. But the possibilities go way beyond that handful of names.

Evergreen Elizabeth is consistently among the most popular of names for our daughters. But the nicknames in vogue change with every generation. And some rare possibilities could make this classic name downright daring.

There are lots of ways for a name to have deep meaning. But some come with powerful meanings built right in. This list offers up some of the best.

The very first post on this site drafted by my firstborn, Alex. Since this site started during his afternoon naps, it’s a milestone too significant not to celebrate!

Are any of these your personal favorites? I’m continuing to go through and update old lists, while looking for gaps that need filling. Is there a list you’d like to see on the site? Please let me know!