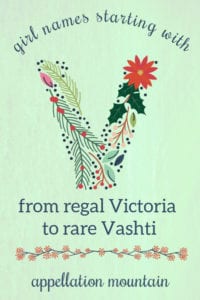 Girl names starting with V are having a moment.

Actually, it’s any girls’ name including the letter V. Just ask Ava, Olivia, and Evelyn. Or Everly, Avery, and Nova.

But V at the top works, too, and a handful of powerfully popular names make this list.

Despite a few blockbuster favorites, a great many girl names starting with V fly under the radar. It’s one of those letters filled with names that really seem like they ought to be more – much more – popular. But they’re not … at least not yet.

In fact, girl names starting with V rank 17th out of the 26 letters of the alphabet in terms of popularity. So while it feels like we’re hearing lots of this letter, maybe it’s not quite as ubiquitous as it can sometimes seem.

Let’s dive into this most stylish letter, and all of those gorgeous girl names starting with V.

GIRL NAMES STARTING WITH V IN THE US TOP 1000

Violet presents a contradiction. For ages, this dramatic purple flower was a “shrinking” Violet – painfully shy. But that doesn’t vibe with the sound or the flower’s beauty. Parents started to rediscover this ecovintage favorite from the early twentieth century. Then along came the Dowager Countess of Grantham on Downton Abbey as well as the second Incredibles movie featuring shy-but-heroic teenager Violet Parr, and this already-rising name returned to the US Top 100.

Regal Victoria brings to mind the long-reigning, era-defining queen. Previous generations probably thought of her as dour and aged, a joyless widow. But a recent re-telling of her story gave us Jenna Coleman as a very young Victoria, newly ascended to the throne and newlywed to the man she loved passionately. Couple that with a great meaning – victory – and a stylish sound. From retro Vicki to cool Via, Victoria nicknames abound, too. No surprise Victoria has become a favorite with parents.

A successor to Isabella, count Valentina among the romance language names with big, bold sounds. Like fellow V-name Victoria, Valentina also has a great meaning: strong, from the Latin valens. Saint Valentine layers on a sort of sentimental feeling, but Valentina’s sound is different enough that it works for daughters born on February 14th … or any of the other 364 days a year.

Most agree that Vivian comes from vivus – Latin for alive. But it’s also an Anglicized form of Irish mythological name Bébinn. Or, in Arthurian legend, the Lady of the Lake. With two Vs, it packs a double punch. Plus, Vivian manages to feel timeless – it’s vintage but modern, and at home in nearly any decade.

There’s something surprisingly timeless about Valerie. Technically, it peaked in the 1960s, but it’s been heard in plenty of decades. The Zutons, Material Issue, Steve Winwood, Amy Winehouse, The Monkees … it’s been a pop song staple for ages, too. It’s the English – and French and German – form of Valeria. It’s part of a cluster of Val names that feel surprisingly timeless.

Another name with Roman roots, Valeria comes from valere – to be strong. It’s been used in small numbers in the US For ages, but really never caught on until the twenty-first century.

It means faith in Russian, and coincides with the Latin word for truth. That’s an awful lot of meaning for a mere four letters. The spelling Viera is sometimes seen, too.

Invented by the writer Jonathan Swift, Vanessa comes from re-arranging the syllables of a friend’s name: Esther Vanhomrigh. That was back in 1726. It’s also a butterfly name, thanks to a genus of butterflies known as Vanessa.

The French feminine form of Vivian, it’s the given name of the youngest Jolie-Pitt sister, twin to Knox. With fellow French girl names like Madeleine and Genevieve so in favor, Vivienne fits right in.

A romance language take on Vivian.

Like Valerie, vintage Veronica crosses decades, defying easy categorization. It’s a mix of Greek name Pherenike and the Latin phrase vera icon – true image. It ranked in the US Top 100 in the 1970s, 80s, and 90s … but it feels more like an overlooked gem than a sister for Ashley or Jessica.

Originally a Roman family name, we’ve long associated Virginia with Queen Elizabeth I – the Virgin Queen – as well as Virginia Dare, the first English child born in the New World. Today, though, it’s mostly a place name, as in the US state.

A pretty place name that brings to mind waltzes, pastries … and okay, sausages, too. But Vienna’s name-like sound and appealing image is enough to overcome that last association.

This name means knowledge in Sanskrit. It’s sometimes listed as a name of goddess vati. In the Hindu religion, Saraswati is the goddess of knowledge, and known as the mother of Vedas.

Another spelling of Valerie.

A Spanish and sometimes Slavic take on VIolet.

A short name with multiple origins and meanings, including the Latin vita – life.

Colorado place name Aspen, is a fast-rising favorite, so why not Vail?

A poetic term for a valley, television’s Savannah Guthrie gave the name Vale to a daughter in 2014. It’s brief, feminine, and still unexpected.

The capital of Malta, Valletta was named for Jean de Valette, who fought off the invading Ottoman army in 1565. As place names go, it’s almost never heard – but has the makings of an appealing choice. Spelled Valetta, it’s seen some use in the US, but Valletta is almost unknown.

You might think of Valencia oranges; they take their name from the Spanish city. Like Valentina, this name comes from the Latin valens – strong. It’s a long and lovely sound that would work well for a daughter.

It’s unfamiliar as a baby girl name in the US, but Valeska evolved as a pet form of Valeria, particularly in German.

If you know your Norse mythology, then you know valkyries are a what, not a who – they’re battlefield spirits who escort the dead to the afterlife. But Marvel made Valkyrie a person, and a name. She’s an Asgardian warrior, first appearing in comics in 1970. In 2017, Tessa Thompson played the role in Thor: Ragnarok, and she returned in Avengers: End Game. We expect to see Thompson as Valkyrie on the big screen again soon.

Names ending with -ora had a good run in the late nineteenth century – just ask Cora, Dora, Nora, and Flora. Less common -ora enders ranked back then, too, like Elnora, Izora, and Clora, but never Valora. One possible explanation: it’s from an Esperanto word meaning valuable. But it seems equally likely that Valora is just another in the long sequence of -ora enders, inspired by Valerie and company.

A name with Sanskrit and Hindi origins, Vanita means either lady or lovely.

Made famous by Wheel of Fortune personality Vanna White, this name probably has an Italian origin. It’s short for Giovanna – though White’s birth name is simply Vanna.

This rare name is a Scottish take on Guinevere. It’s said that the legendary queen’s final resting place is called Vanora’s Grave, located in a small Scottish village.

In Russian, Vanya is short for Ivan. (Anton Chekov’s famous play Uncle Vanya makes this name more familiar than it might be otherwise.) But in some Slavic languages, Vanya is feminine. And it tracks with Anya, Tanya, and Sonya.

Maybe an inevitable twist on Cara and Tara, or possibly a short form of Varvara.

Swap Barbara’s Bs for Vs, and you’ll arrive at Varvara. Almost the same name, but with a whole different vibe. This spelling and pronunciation is favored in Greek and Russian, as well as several related languages.

This name appears in the Old Testament, the name of a queen of Persia. Some tellings of her story make Vashti wicked and selfish; others paint her as principled and fierce.

Like Varvara, Basil drops the B and becomes Vasily in Russian. That makes Vasilisa the intriguing feminien form.

A Welsh surname long used for boys in the US, it’s sometimes heard for girls in our Blair-Sloane moment. Spellings like Vaunne are seen, too.

The name of a star in the night sky, Vega appears in the constellation Lyra. It comes from an Arabic phrase meaning “falling eagle.” There are some traditional folktales associated with the star. It’s big in Spain right now, and rising in use in the US – though still quite rare.

Another Latin origin: Vela refers to the sail of a ship. In the night sky, it’s a constellation once considered part of the Argo Navis –  Jason’s ship from Greek myth. Vela is visible in the southern hemisphere.

A staple in the US Top 1000 during the first half of the twentieth century, Velda sounds old-fashioned today. Chances are it comes from Germanic names like Waldemar.

Vintage Velma ranked in the US Top 100 in the 1910s, the height of style. Chances are it is cousin to Wilma, via the spelling Vilma – which makes it a feminine form of William.

In 1935, author Enid Bagnold gave this name to the heroine of her novel, National Velvet. A young Elizabeth Taylor played Velvet in the 1944 movie version. It’s been used in small numbers ever since – though most probably think of the rich fabric, not the fictional character, first.

The Italian name for Venice, made famous by Benjamin Disraeli’s 1837 Venetia, in which it is the name of the title character.

Possibly a cousin to Vera, Veronica, or both.

A Latin word meaning truth, Verity fits right in with Felicity and other virtue names.

An Italian city, Verona is the setting for Romeo and Juliet. That alone should make it broadly familiar.

Ian Fleming named a character Vesper Lynd, as a play on West Berlin. But Vesper is the Latin word for evening, and, in Greek myth, Vesper is the personification of the evening star – or Venus, in Roman tradition.

The Roman goddess of the hearth, Vesta comes from the Greek Hestia, literally meaning hearth.

Either a smoosh of Vi and Anne, or possibly a slimmed-down take on Vivianne.

The French form of Victoria, made familiar by a minor Harry Potter character.

A feminine form of Victor, by way of the Latin name Victorinus. It’s an unusual name in the US today, but it has history, particularly in early twentieth century Spain.

The straight-up word name, instead of either Victoria or Victoire. While it’s rare as a baby name, it fits with so many bold word choices we love for our children, from Legend to Blaze.

The Italian form of Vincent is Vincenzo; Vincenza is the feminine.

The Latin word for the lovely purple flower, and a Shakespearean hero from Twelfth Night.

Bold and dramatic, Violante is a cousin to Yolanda. Both are likely related to the violet flower.

Speaking of Violet, this is the Italian form of the name. The Spanish, single-T Violeta remains more popular.

The French form of Violet, though some parents might simply prefer the extra -te ending, just like Juliette, without actually changing the pronunciation.

Viorica is Viola’s Romanian cousin, and very rare in the US. But, given our love of V and Violet, it might wear beautifully.

Another take on Vida.

From the Latin vivus, meaning “to live.”

The most elaborate of all the Vivian names.

The German Wiebke seems tough to wear in the US, but the Scandi Vivica – choose your spelling – crosses cultures beautifully. It can also be a Sanskrit name meaning wisdom, though that’s often spelled Viveka.

Originally a French masculine name, Vivien takes on a different meaning through use. First, Tennyson gave the name to the Lady of the Lake in his 1859 re-tellings of King Arthur’s story. In the twentieth century, Hollywood legend Vivien Leigh changed her name’s spelling from Vivian to Vivien to make it more glamorous.

Another form of Wanda, with a sharp V start.

What are your favorite girl names starting with V? 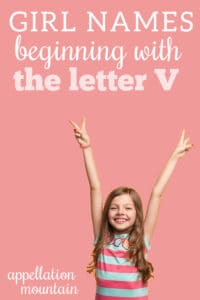 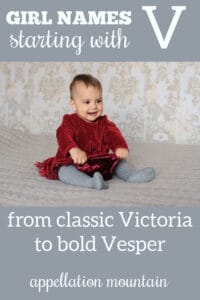