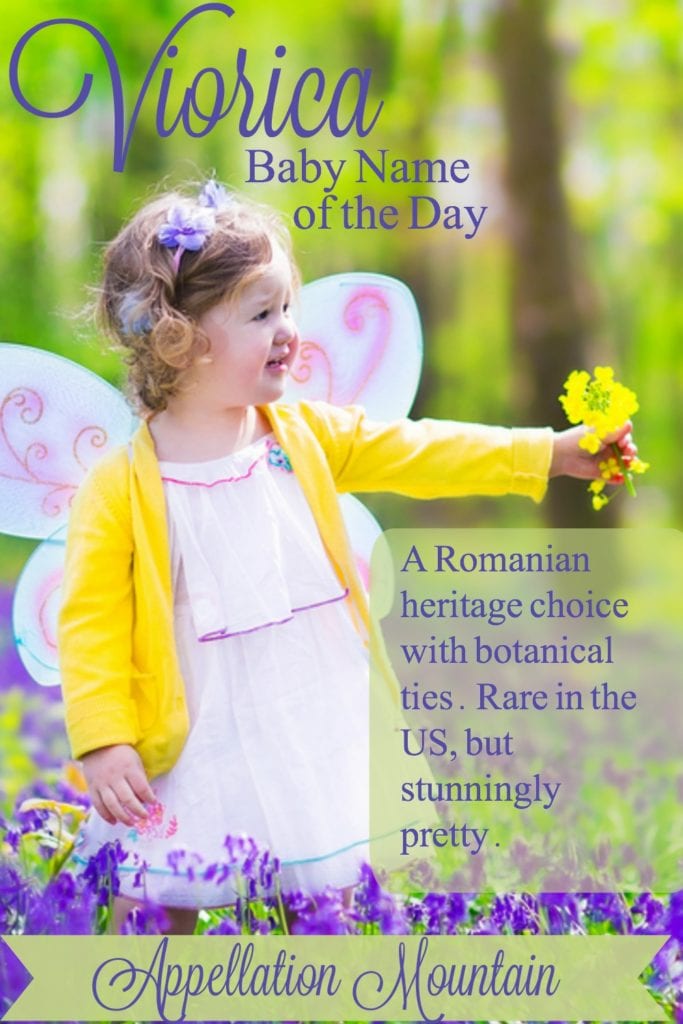 Our Baby Name of the Day first came up in this post.

Viorica: From Romania, With Love

Every famous bearer of the name comes from Romania, without exception.

There’s opera singer Cortez, whose international career flourished in the 1960s and 70s. An earlier opera singer, Ursuleac, made her name in the 1930s, singing for Richard Strauss.

Layer in athletes, politicians, and other performers, and this emerges as a traditional Romanian name used steadily from the 1930s into at least the 70s.

Viorica: From the Garden

The name sounds a little bit like Victoria. Except there’s no connection. In Romanian, Victoria translates as … Victoria.

Instead, it comes from viorea – bluebell. Viorel serves as the masculine form. The sound seems familiar in Romanian given names. For example, Mioara is a form of Maria.

Bluebells grow in Romania, and it’s easy to imagine a field of flowers inspiring a daughter’s name – though I’m not clear which type of bluebell flourishes there.

One note: translations of viorea vary. Some sources list it as Violet, though Violeta makes a more common Slavic name from the flower.

Romanian is considered an Eastern Romance language. Just like French and Italian, the language descends from Latin, thanks to Roman soldiers and settlers in the early centuries AD.

And yet it doesn’t necessarily sound like French or Italian. Modern Romania was called Dacia way back then. It centers around the Carpathian mountains, at the fringes of the former Roman territories. After the Romans left late in the third century, other tribes influenced the language. Goths and Slavs left their mark.

In fact, the oldest written document in Romanian dates to around the 1500s, which makes it a relatively young language in some ways.

I suspect that Viorica keeps company with many names from similar languages. Attempts to embrace national identity and restore lost heritage often result in the formation of new names. The names often come from vocabulary words – think of the Cornish Elowen or the Irish Saoirse.

At least one other floral name specific to the Romanian language flourishes: Brandusa, meaning crocus.

Or maybe the resemblance to the flower name is nothing but coincidence. Just as it sounds close to Victoria to my ear, others suggest it might be used as the Romanian equivalent of the German Friederike.

It strikes me that a German Friederike might have adopted Viorica as a similar sounding Romanian equivalent. That doesn’t mean there’s a linguistic connection.

Viorica: By the Numbers

The name has never cracked the US Top 1000. In fact, it has never been given to even five girls in a  single year in the US.

A handful of women appear in US Census records from the 1920s and 30s. Some surnames indicate likely Romanian heritage. One entry gives the woman’s name as “Viorica Violet” – fascinating! Did we understand Violet as the English translation of the name early in the twentieth century?

Another record, from Montreal, lists a woman as Veronique (Viorica). As with Violet and Friederike, perhaps Veronique served as a reasonable approximation of the name in a new language.

Overall, this name seems unfamiliar to most American parents – and, I suspect, to most people outside of Romania. But with that stylish V, a romantic sound, and ties to the garden, this could be a very wearable rarity – if only you don’t mind explaining the story.

Do you think Viorica works in English? Or is it just too different?