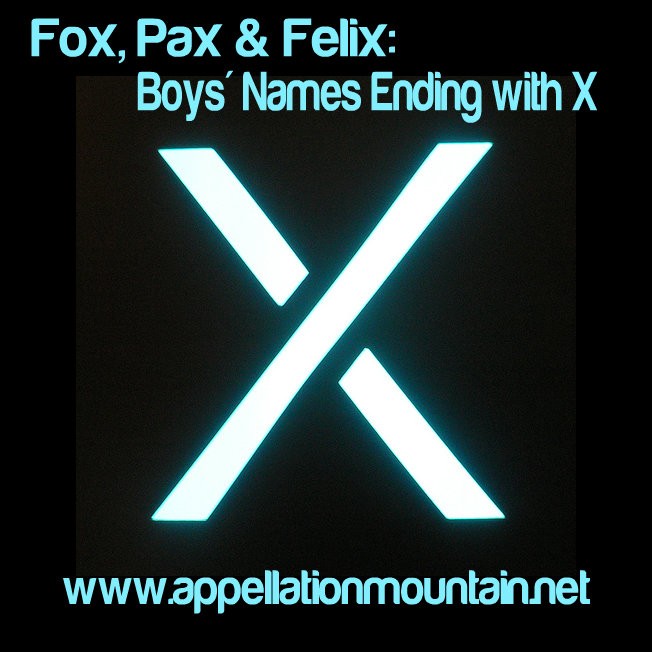 Boys’ names ending with x range from the mainstream to the edgy, the solidly masculine to the unisex. My unscientific guess is that more names ending with x are in use in 2013 than ever before. We do love those high-value Scrabble letters: z, j, k, v, x.

Besides its cool, edgy sound, X has plenty of positive associations. X marks the spot. The Winter X Games just wrapped up in Aspen a few days ago. For the games, and in many uses, X stands in for words like extra, extreme, and excellent. It’s a vibrant, active, boundary-pushing sort of vibe.

The Jolie-Pitts, starbaby namers extraordinaire, have a trio of sons with names ending with x. And the letter lends itself to use in short, complete masculine names with a modern sound.

Read on for some of the most intriguing and most-often used boys’ names ending with x.

Ajax – With mythological choices gone mainstream, Ajax can be seen as more than a cleanser. The Trojan war hero has yet to inspire many parents, but he could work well. Artist Marni Kotak chose the name for her son, whose birth and first year have been documented in a series of performances at Brooklyn’s Microscope Gallery. Unranked in #2011.

Alex – Arguably the most classic ending with x name on the list, Alex is both an independent name and the logical short form of the evergreen Alexander. Style-wise, Alex is eclipsed by Axel these days, but that x-ending keeps him in the game. Ranked #95 in 2011. Alexander ranked #8.

Bronx – Singer-actress Ashlee Simpson surprised the world when she and musician husband Pete Wentz chose the New York borough of The Bronx as inspiration for their son’s name. Unranked in 2011, but rising rapidly.

Dax – Actor Dax Shepard made his name as a buddy of Ashton Kutcher’s on Punk’d and has gone on to have an acting career of his own. The name is also worn by a soccer player, a town in southwestern France, and a creature in the Star Trek universe. Ranked #712 in 2011.

Dex – Short for Dexter, could just Dex work? It softens the association with the fictional serial killer, but also forgoes some of his vintage, quirky charm. Unranked in 2011. Dexter ranked #384.

Essex – A place name dating to the early Middle Ages, Essex has a romantic sound. The current Earls of Essex date their title to the seventeenth century, but the title was first in use five centuries earlier. Today he’s a dashing rarity to consider. Unranked in 2011.

Felix – Once reserved for felines, this happy name was boosted by so many things. Harry Potter‘s potion reminded future parents everywhere of the name’s positive meaning. More than one celebrity has chosen Felix. And Fearless Felix Baumgartner jumped from the edge of space itself last year, permanently changing his image from the fussy half of The Odd Couple to a daredevil. Factor in that he’s a long-standing American ally of James Bond, and Felix is quite the dashing possibility. Ranked #311 in 2011.

Fox – It was a surprising choice for FBI agent Fox Mulder in The X-Files, but it has a long history of use as a nickname, a surname, and even some history in the first spot. We’re wild for animal names in 2013, meaning that Fox combines two trends: his fierce, outdoorsy, nature vibe and his ending with x sound. Unranked in 2011.

Hendrix – A rock star surname, thanks to the legendary Jimi Hendrix, he combines surname style with that vibrant x ending. Ranked #976 in 2011.

Jax – In recent years, the popularity of Jackson has led to alternative spellings like Jaxon. If Jack can stand alone, why not Jax? He’s completely nouveau, but at #319 in 2011, he’s also very well established as an independent name.

Jex – Take Jax and twist a little farther and you’ll arrive at Jex. Does it work? Six boys received the name in 2011, so he’s pretty rare, and unranked in 2011.

Lennox – Lennox feels at home on a prep school campus in a navy blazer and rep tie. But thanks to world heavyweight champ Lennox Lewis, there’s a tough guy side to this name, too. Ranked #823 in 2011.

Lynx – If Fox works, why not Lynx? The tufty-eared wildcat has lent his name to many things, including a former bestselling car from the 1980s, the Mercury Lynx. Today he’s a daring possibility, but not completely unknown. He might also serve as a short form of presidential surname Lincoln. Unranked in 2011.

Lux – Thanks to The Virgin Suicides, Lux is mostly seen as feminine – and tragic. It’s associated with Luxembourg, light, and punk rock innovator Lux Interior, frontman for The Cramps. None of it seems like likely inspiration for a son’s name, but Lux could be wearable. Unranked in 2011.

Maddox – A surname choice, Maddox is derived from the Welsh Madoc. Mad means fortunate, so it makes for a nicely meaningful choice. Angelina Jolie adopted her first child, Maddox Shivan, in 2002. The name immediately caught on with parents in the US. Ranked #169 in 2011.

Max – Nearly as classic as Alex – and almost as popular, too! Max is boosted by Where the Wild Things Are and his vintage appeal. Plenty of formal options are available, and their popularity obscures just widely-used Max is these days. Of course, he’s plenty stylish on his own, too. Ranked #96 in 2011.

Pax – Another Jolie-Pitt brother, Pax is the Latin for peace. She’s a minor goddess in the Roman pantheon, also associated with spring. Perhaps that’s why parents have embraced the unrelated surname Paxton instead. Unranked in 2011. Paxton ranked #273.

Phoenix – The acting family helped put this one on the map, but it is also a place name and a richly symbolic one, with ties to Ancient Greece, many mythologies, early Christianity, and Harry Potter. His x ending is a bonus. Ranked #388 in 2011.

Rex – He’s regal, and while his history of use includes the doghouse, he’s also a Hollywood leading man. Ranked #617 in 2011.

Tex – An S.E. Hinton character and a legendary country western singer, Tex feels more like a nickname than a given name. But given our passion for cowboy names, place names, and the letter X, this one could see some use. Cartoonist Tex Avery – born Frederick – created many of the most memorable Looney Tunes figures, including Bugs Bunny. Unranked in 2011.

Would you use a boy’s name ending with x? Which one? Are there others that belong on this list?