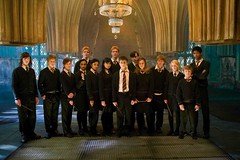 The Order of the Phoenix, from pentadact via Flickr

No sooner had I hit publish on the first installment in The Hermiones series, than the following question rolled in: “What’s the male equivalent?”

It was a baffling question. Many of the qualities we admire in Hermione – bravery, a stubborn self-assurance, book learning and serious street smarts – are common traits for male heroes in fiction. What makes Hermione exceptional is that she’s also an outsider (Muggle-born, in Potterverse parlance) and an ugly duckling. And a girl. Even in 2012, many girls’ names convey a head cheerleader or a princess-in-training image. Hermione stands out – as I’ve written before, she’s clunky, but still cool, and definitely vintage.

Then there’s Katniss, the more modern equivalent. Katniss names are offbeat and often drawn from the natural world, but they’re hearty, even tough. The fact that Katniss is deadly first and compassionate second in many of the stories is what keeps her alive – typical traits for a male hero, but exceptional for a teenage girl.

I’m indebted to C in DC for suggesting that maybe the male equivalent is Neville, as in Neville Longbottom. At the start of the series, he’s as awkward as they come and it turns out he’s lugging around a crushing secret. But the character also has surprising reserves of bravery and grit, and he turns into a true hero without sacrificing any of his native kindness. That’s not the typical hero’s journey, though Neville eventually proves himself a capable lieutenant for Harry – he organizes the student resistance in Harry’s absence, and in the final battle, it is actually Neville who slays the giant snake, Nagini.

This list includes boys’ names that sacrifice a certain energy for a gentle quality. They’re well-born, gentlemanly names, but they’re still clearly masculine. Like Hermione, they’re antique, even clunky – and likely to inspire others to warn you of playground teasings should you give the name to a son. But the Nevilles come out on top in the long run – you can imagine these names on a valedictorian, a statesman, a poet – or maybe an indie rocker.

The US Top 100 includes a few names that could have made this list – Elijah and Tristan, maybe? Or how about Sebastian? But the final requirement is that the name be relatively underused, at least in the US. And so, I give you … the Nevilles.

Alasdair – Alexander is a powerhouse, a top twenty fixture for more than a decade, a name that we easily supplement with “the Great.” Alasdair is his bookish cousin, more Masterpiece Theater than summer blockbuster. And yet don’t count him out – his final syllable is dare, and he has every bit as much history as his more popular cousin.

Ambrose – There’s something vibrant about the long -o sound, but Ambrose still manages to sound scholarly. Maybe that’s because Saint Ambrose is an early doctor of the Catholic church, a fourth-century leader whose writings remain influential today. Plenty of stylish names share his sounds – Brody and Bode, for two – and yet, Ambrose remains in limbo.

Arthur – With Selma Blair’s new son wearing this name, it might be time to declare Arthur back – except that this former Top 20 mainstay continues to fall in the rankings. Still, between his stylish -r ending and the legendary king of Camelot, Arthur has much to offer.

Asa – There’s much buzz about Asa, thanks mostly to young actor Asa Butterfield. The name conjures up a certain silver-haired 80s television patriarch, and the meaning – doctor – is similarly distinguished. He’s awfully close to girls’ mega-hit Ava, but don’t rule him out. Asa reads brainy, but he also shares that long a sound with Mason and Jayden.

Augustin – August is venerable, and all of the related names share a certain dose of Nevilleness. But let’s call Augustin the Neville, thanks to writer Augusten Burroughs – born Chris. Augustin feels a tiny bit français, far less imperial than Augustus.

Balthasar – Some of the Neville names carry an almost exotic feel, a clunkiness that is less about sound and more about how the name lingers at the edge of our awareness. Many traditions give this name to one of the Three Wise Men in the nativity story, and you probably recognize actor Balthazar Getty. With no easy nicknames, Balthasar is tough to wear, but terribly appealing, too.

Barnaby – Thinking of Charles Dickens’ Barnaby Rudge might make some question if this name belongs on the list. But I’m thinking of Dr. Barnaby Fulton, the chemist charged with discovering an elixir of youth in 1952’s Monkey Business. Though Fulton is played by the suave Cary Grant, he’s quite bumbling – it isn’t Fulton, but Fulton’s chimpanzee who mixes the concoction that sets the film’s events in motion.

Bartholomew – If Dr. Seuss wrote young adult novels set at a school of wizardry, he’d have called his hero Bartholomew. Think of The 500 Hats of Bartholomew or Bartholomew and the Oobleck. He’s a young boy who stays calm in extraordinary circumstances, and ultimately saves the day. Of course, there’s also Bart Simpson, who takes the name in a different direction …

Cassius – Balthazar Getty gave this name to his son, proving that Nevilles run in the family. Cash is cowboy cool, but Cassius is the name that Muhammad Ali shed to become a champ. Despite a saint, some ancient Romans, and a Kentucky politician who championed emancipation, Cassius has always been rare. He sounds something like cautious – which somehow makes him very much a Neville to me.

Clark – Need I say more than Kent? Superman’s alter ego is shambling, awkward, can’t talk to girls. But he’s also a thoroughly decent fellow who is just as worthy of the cape as his man-of-steel counterpart.

Crispin – Shakespeare had King Henry V rally his troops with the enduring Band of Brothers speech about Saint Crispin’s Day – a story that has become synonymous with the triumph of the underdogs. (And yes, history and literature meet here – the English were outnumbered, but still beat the French army at Agincourt.)

Dexter – With that middle x, you might argue that Dexter has a jazz age cool, a fresher alternative to Max or Alex. But pop culture gives us mostly Dexters who are misunderstood: a disgruntled boy genius, an ethical serial killer.

Finbar – A few years ago, Finn might have made this list. But these days, he’s a conventional hero, from Cars’ Finn McMissile to Glee’s Finn Hudson. Finbar is the Anglicized version of a sixth century saint’s name. He’s still got the effortlessly cool short form Finn to wear, but Finbar heads in a clunkier, quirkier direction.

Desmond – From musical innovator Desmond Dekker to Anglican bishop and celebrated human rights activist Desmond Tutu, this name has been worn by some impressive men. And yet he remains relatively underused and scholarly-sounding.

Edward – With Twilight mania still at a fever pitch, can the name of the romantic vampire lead really be a Neville? Maybe. After all, Edward Cullen has yet to inspire parents to re-imagine the name. At #136 in 2010, he’s the most popular name on this list – but that’s still a far cry from his Top Ten ranking a century ago.

Ezra – I love Ezra, with his razor-y sounds and Biblical origins. But he’s just not a tough guy name. He’s more mid-century poet, or possibly an even more antique academic. But like Neville, there are layers to this name.

Gale – Once upon a time, this was a masculine moniker derived from a surname. Now he’s gone girl, thanks to Abigail. But literature could come to his rescue, thanks to handsome Gale Hawthorne, a hero from The Hunger Games.

Giles – From a Late Latin name borne by an eighth-century saint, Giles is more often a surname than a given name. But when he does occupy the first spot, Giles is something of a posh English appellation – not unlike Neville. As for unexpected heroes, Buffy the Vampire Slayer gave us a librarian called Rupert Giles, who also turned out to be pretty good at fighting the forces of evil in his own way.

Graham – Like Giles and Neville, he has roots as a surname. Like Neville and Giles, he sounds smart and vaguely English. Like novelist Graham Greene, he’s serious without being stodgy – but only just barely. He’s Scottish and, thanks to the cracker invented by nineteenth-century health food reformer Sylvester Graham, edible.

Horatio – There’s something lively about Horatio, but he’s also a quirky antique. British admiral Horatio Nelson made the name famous when he defeated Napoleon, but he’d been in use for centuries earlier, worn by an American general in the Revolutionary War and a long list of Earls of Oxford. More recently there’s American author Horatio Alger and fictional figure Horatio Hornblower, an unlikely hero of the British Navy. His last appearance in the US Top 1000 was back in 1899, making him a clunky vintage find.