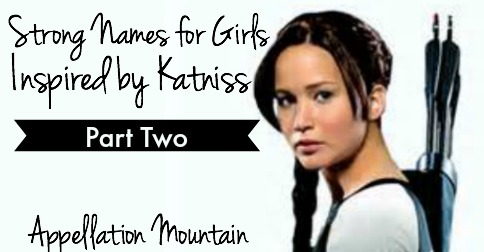 This post was originally published on March 2, 2012. It was substantially revised and re-posted on October 14, 2014.

Strong names for girls range from evergreen classics to modern possibilities. Most of the names on this list lean new, since they’re inspired by Hunger Games heroine Katniss Everdeen.

To be a Katniss name is tough – literally. The name has to be strong and resilient, while also feeling fresh and unexpected. Katniss names have an edge, but many of them have subtle ties to nature, too – just like the original.

The first installment of this list included choices like Aderyn, Lux, and Elke. Here’s the second half!

Maeve – Maeve is a new addition to this list, thanks to a sharp sound. It’s not a new name – it’s borrowed from Irish legend. But it is the name of a warrior queen, so I think it definitely fits with strong names for girls.

Maren/Marit/Merit – It’s a group of names that comes from evergreen classic, like saintly, regal Margaret and Mary. But with their tailored endings, Maren, Marit, and Merit strike a balance between the feminine and the strong.

Morrow – I nearly added Marlo to this list, but Marlo is more quirky-retro than epic. Morrow feels like a masculine surname if you think of legendary news journalist Edward R. Murrow. But think for another minute, and Morrow has possibilities. An archaic term for either the next day or the morning, Morrow is almost a subtle way of communicating hope and faith in the future – an auspicious name for a child, heroine or not. 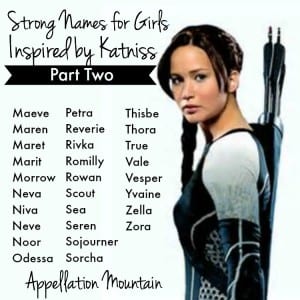 Neva, Niva, Neve – These short names have many possible origins, ranging from famous rivers to Irish myth to the Latin word for snow. They also have an awful lot of edge. It’s easy to imagine any of them wielding a bow and arrow.

Noor – An Arabic name meaning light, Noor was made internationally famous thanks to Queen Noor of Jordan. Nora is a sister for Mary, but Noor is a Katniss name.

Odessa – I’m fascinated by Odessa, which brings to mind both Texas and the Ukraine, thanks to places on the map. While it’s longer and more feminine than of the Katniss-inspired strong names for girls, it’s also got a surprising backbone. Maybe it’s because of the ties to the Wild West, or the connection to Odysseus and his odyssey. I can see Odessa as a sister for Wyatt or Atlas.

Petra – If Peter means rock, then so does this feminine form. The name is little known in English – Petra last charted in the Top 1000 back in 1973, and has never climbed higher than #493 in 1929. But Petra is also an ancient city, once the capital of the Nabatean kingdom many years BC. Petra feels vaguely Eastern European, but also brings to mind Peeta, the name of Katniss’ love interest and fellow Hunger Games contestant.

Reverie – How can a dreamy, musical name fit in with the other names on this list? Chalk it up to sound. While Reverie is rather gentle, short form Rev is pure power. Reverie is also a name virtually unused for girls until the twenty-first century, when we start to hear it surface at a steady clip. Marginamia’s daughter wears it in the middle spot. Girls’ Gone Child has girls called Fable, Reverie, and Boheme.

Rivka – The name Katniss is distinguished by its ties to the natural world. Rivka can’t claim those – it’s the Hebrew form of Rebecca. But Rivka sounds like river. And speaking of sounds, the ‘vk’ combination is pretty darn fierce.

Romilly – A rarity on the rise amongst name fans, Romilly is a French surname of sorts, one that traveled to England with the Normans. Like Katniss, this name is feminine but frills-free. The first syllable conjures up an ancient empire, and even if Millie is sweetly vintage, all combined, this is a compelling option.

Rowan – Katniss is a nature name, and many of these are also borrowed from the natural world. Rowan is probably the most mainstream choice on this list, a gender neutral tree name. It’s also the name of one of Anne Rice’s powerful characters in The Witching Hour.

Strong Names for Girls: S – U

Scout – Scout is best known as a child’s name. And while Jean Louise Finch is admirable, she’s only six years old. And yet, to scout is to travel ahead of the rest, looking for information. It’s a tough gig, and so I think Scout fits with strong names for girls.

Sea – Secret and Season are more common, but I think Sea is the Katniss name. Why? It brings to mind the forces of nature. We’ve used Kay and Jay and Dee as given names, so why not Sea? Another option that might fit this list is the slightly more familiar Ocean.

Seren – Seren is the Welsh word for star, not used much before the twentieth century in Wales and still rare in the US today. She shares sounds with the traditional Sarah, but is far more unexpected.

Sojourner – Sojourner Truth was born Isabella Baumfree. She became famous as an abolitionist and suffragette, a true heroine. Journey is far more popular, but the related, and far rarer, Sojourner feels like it fits better with strong names for girls.

Sorcha – One of my favorites, this Gaelic import is also spelled Saoirse. The name means freedom, and like Seren, is a relatively modern discovery in her native tongue. Saoirse first came into use during the Irish War of Independence in the 1920s. Just as Katniss Everdeen started a revolution, Saoirse is a name for a girl out to the change the world. The phonetic spelling Sorcha made this list, however, because one Katniss quality is a straightforward pronunciation.

Thisbe – Thisbe was the original Juliet, a maiden in Roman myth who falls in love with a guy from the wrong family. They attempt to elope, but there’s a hungry lion about, and the rest is tragedy. Given her age, maybe Thisbe should’ve made the list of Hermiones. But Thisbe’s sound is remarkably modern, and many ends-in-e names – Chloe, Zoe, Penelope – are having their moment in the sun now.

Thora – Thora did make the list of Hermiones, but the name makes a cameo here, just to demonstrate that not all names are exclusively one or the other. Thora has more bite than gently old-fashioned -oras like Cora, Nora, or Dora. Golden Globe nominated actress Thora Birch has put the name on the radar of some modern parents, yet the name has been missing from the US Top 1000 since the 1920s. Any name that conjures up a thunderbolt-wielding god is definitely belongs among the strong names for girls.

True – Like Sea, True is short. A modern virtue name akin to Hope and Faith, True is possibly spiritual, but maybe not – you can imagine parents from many points-of-view embracing this one. Looking for an even edgier option? The French equivalent is Vrai, which sounds something like fray. Or does Vrai sound more like a brutal District 2 contestant taken down by Katniss?

Vale – Gale is Katniss’ closest friend when the series begins, but he’s a he. Vale – as in valley – could be a Katniss name for a girl.

Vesper – Vesper was made famous as a Bond girl, which isn’t necessarily the equivalent of Katniss. But in this case, the name was inspired by a real life spy. Plus, vesper is another name for the evening star, and sometimes used to refer to an evening prayer service, meaning that the name is layered with meaning – just like our inspiration.

Zella – There’s something exuberant and playful about Zelda. But remove the ‘d’ and the intriguing rarity Zella might belong among the strong names for girls. It has many a potential meaning.

Zora – Another of the -ora names, this Slavic name meaning dawn has been worn by literary powerhouse Zora Neale Hurston. It’s distinctive and undeniably strong, but still wearable.

Are there other Katniss names you would add to this list? Do you think these feel like strong names for girls, or would you define that category differently?