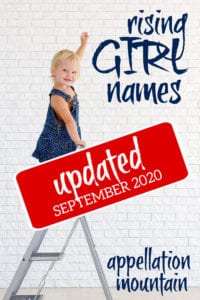 Every year, I do my best to predict rising girl names. These are the names most likely to tip into the US Top 1000 when the new data is released.

Some years, I feel like a visionary. Other times, my crystal ball is on the fritz.

Then again, sometimes it just takes names an extra year or two to get there. For calendar year 2018, it took 260 births for a name to make the list. Moving up the rankings takes time.

But for these fifteen names, I’m thinking this might be their year.

Why does the Top 1000 matter? While there’s plenty of data on names that don’t rank, the majority of our attention focuses on names that do. Parents sometimes use it as a proxy. They’ll avoid names in the Top 100, but look at names ranked, say, 300 to 500, as choices that are reasonably familiar and not too common.

For parents to use a name, they have to be aware that it exists. And earning a spot on this list is often the best way for that to happen.

Quirky-cool Bernadette blends an unlikely set of associations. There’s Saint Bernadette, a young nineteenth century French teenager when she reported seeing visions of the Virgin Mary at Lourdes. Or maybe you think first of The Big Bang Theory’s waitress-turned-microbiologist’s Bernadette Rostenkowski-Wolowitz. The latter makes it familiar to a broader audience. Bernadette also benefits from our newfound love of -ette names. It’s just a hop, skip, and a jump from Scarlett and Juliette to Bernadette. It belongs with the rising girl names!

Cleopatra feels like a big name to wear, best reserved for ancient Egyptian queens and adorable 90s pop starlets. And we’ve named a lot of cats Cleo. But lately, it feels less dramatic – and feline – and more like a vintage pick with a bright, modern ‘o’ ending. And while Cleo has trended unisex in the past, today it’s almost exclusively feminine. That’s because names from history like Cleon and Cleophas have faded into obscurity, in a way that the immortal Cleopatra simply will not.

It sounds like Melody without the M, but Elodie’s history is distinct. The French name comes from Alodia, a (probably) Visigoth name worn by a ninth century Spanish martyr. That’s quite obscure, but Elodie succeeds on sound. It’s a little like Rosalie, Amelie and other vintage, French-inspired choices. We’re wild for El- names, too, from unstoppable Ella to classic Eleanor to a whole class of rising favorites, like Eloise and Eliza.

UPDATE: For the first time since the nineteenth century, Elodie is on the charts at #862.

For every parent who loves mini names like Mia and Ava, there’s another looking for the next Isabella. If long and lovely is your thing, might I suggest Emiliana? It picks up on Amelia, Emily, and Emilia, but turns it up to eleven. Pronounce every possible syllable, and this comes in at five, leaving four-syllable Olivia in the dust. But with lots of opportunities for nicknames, it’s easy to shorten Emiliana, too. And longer Em- names, from Emery to Emmeline, have fared well in our age of Emma. So why shouldn’t Emiliana be among the rising girl names?

UPDATE: With just 228 births, Emiliana fell in use slightly and failed to chart.

Florence recently returned to the US Top 1000. Nora and Cora won’t quit. And so many flower names, from classic Rose to a garden of new possibilities, feel at home in 2020. So why not Flora? The Roman goddess of spring and all things growing, this name feels gently antique and nicely tied to the natural world. If you love Lily and Violet, but want something less expected, Flora is just different enough. Flora might be one Downton Abbey-esque character away from being big.

Twenty-first century baby names tend towards the casual – Millie over Millicent, Mia over Maria, and Hattie over Harriet. But shouldn’t Harriet be ready for revival? It’s a traditional name we all recognize, one with a great built-in nickname. Harriet could be the next Abigail, a vintage favorite that feels right at home in the twenty-first century.

When did “indie” become a compliment? In the 1981, the world met intrepid explorer Indiana “Indy” Jones. Then came the Independent Spirit Awards for small filmmakers, launched in 1984. And by the 1990s, we talked about “indie rock.” Indie looks a little bit like Sadie and Maisie, but it’s more of a modern virtue name. Independent feels like much, too much. But Indie is Scout’s equally adventurous sister.

Take the Jo of Josephine and Josie, mix in the middle V of Ava and Ivy, and then add the magic of Will Ferrell’s 2003 Christmas movie Elf. Zooey Deschanel played Jovie, the sweetly-singing human whose holiday cheer helped save Santa. The name has slowly caught on as the movie has become a holiday classic. It’s fresher than Holly, and works year-round – but might be especially charming for girls born around the winter holidays.

The rise of Instagram influencers could mean a whole new category of creative names. CrossFit celeb Rich Froning is dad to three children: son Richard III, called Trice, and daughters Harper Violet and Lakelyn. I watched Laken for a while, but it never really caught on. But Lakelyn feels like a successor to Oaklyn and Blakely. It sounds like a name, even though it really hasn’t been one … until now.

UPDATE: Lakelyn increased in use, but still stands at 204 births, short of the 257 mark required to crack the Top 1000.

Marlowe briefly dipped in to the US Top 1000 … and then immediately fell out! I think that’s a blip, though. Marlowe hits all the right notes. It’s a surname name in the key of Madison, Hadley, Harper, and Everly. It shares the ‘o’ ending of so many stylish girl names. And it feels like the middle ground between vintage Margot and all-modern Harlow.

UPDATE: With 241 births, Marlowe continues to dance just outside of the Top 1000.

Like Flora, Persephone is the bringer of spring. Sound-wise, it captures all the romance of Ophelia and comes quite close to chart-topping Penelope. If Stephanie could make it to the top of the charts in the 1980s, surely Persephone can be considered for their daughters’ generation.

There’s a place for strong and modern girl names. Think of Hadley or Quinn, names that feel unisex, but are used more often for girls. Or maybe River, Rowan, or Remy, choices that are more often masculine – but work for our daughters, too. That’s why my eye is on Ripley. Ellen Ripley is the action hero of so many Alien movies, an iconic figure, widely known since her 1979 debut. If a mermaid can launch Madison, surely an action hero can boost Ripley into the rankings.

UPDATE: 170 births wasn’t enough to take Ripley into the rankings this time.

We love place names. Just ask all those parents of girls named Brooklyn and Savannah. On sound, Salem succeeds. And yet there’s something about Salem that feels a little spooky, since “witch trials” almost inevitably follows mentions of the New England town. (Though the history is complicated.) But I’m not sure it’s a drawback. After all, it’s originally a Biblical place name, with an appealing meaning: peace.

UPDATE: Salem is celebrating a sky-high debut, at #752. That translates to 372 births.

When Jennifer Garner and Ben Affleck chose this name for their daughter in 2009, it seemed like the next big thing. And maybe so … but it’s taken a while for fiery, angelic Seraphina to go from completely unknown to striking distance of the US Top 1000. But it’s slowly caught on. Seraphina sounds a little bit like Sarah and Sophia merged and expanded. It almost fits with elaborate, extravagant grandmillennial style.

UPDATE: Not. quite. yet. With 254 births, Seraphina is just a few babies away from making the list. I expect it will be on my picks for rising girl names again next year!

Winifred isn’t quite ready for revival, but Winnie? Just like Hattie and Millie, it might precede its formal form back into the rankings. Another pro-Winnie factor? Late night talk show host Jimmy Fallon welcomed daughter Winnie in 2013. While not every celebrity kid proves influential, talk show hosts tend to share more about their kids’ lives in their shows. And while Winnie is clearly a co-star during the 2020 broadcast-from-home phenomenon, mentions of his eldest daughter have been a fixture for years. Plus, Winter remains a fast-rising nature name sharing the Win sound.

Eight out of my fifteen rising girl names predictions made the Top 1000. This might be my best year yet! Do any of these surprise you? 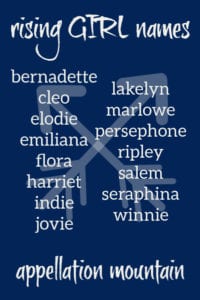 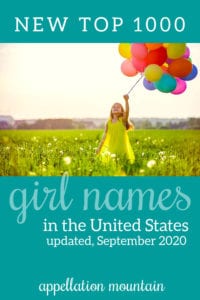 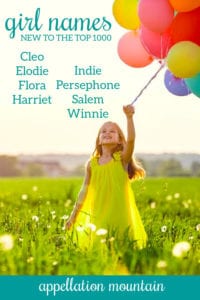